GOP Sen. Roy Blunt says the US should 'treat Russia like it's virtually a criminal enterprise' amid cyberattacks 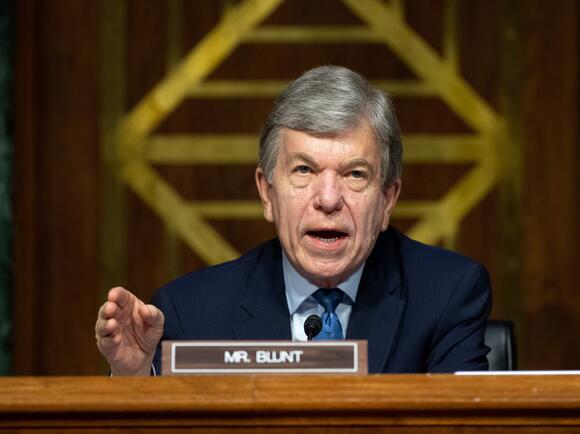 Sen. Roy Blunt said Sunday that the United States should treat Russia as a "criminal enterprise" following recent cyberattacks in the US.

Blunt, a Republican from Missouri, made the comments during an appearance on NBC News' " Meet the Press " when asked by moderator Chuck Todd about how the US should respond to Russian aggression.

"Remember, 2016, as late as early 2017, we had cyber defense capabilities, but we didn't have the authority - the president had never given the authority - for cyber offense," he said. "And so when we did push back, we pushed back pretty hard. In 2018, it stopped.

"I think to some extent, Chuck, you really have to treat Russia like it's virtually a criminal enterprise," Blunt, who earlier this year announced his intent to retire from the Senate at the end of his term, added. "You know, they harbor criminals, they, they don't appreciate the rule of law or any kind of level of personal freedom. And I do think we have to push back. When there's no, no penalty, there's no sanctions - hard to find who's doing it."

The White House last week said it believed that Russian criminals were likely responsible for a cyberattack on the world's largest meat producer, JBS.

The Russian government has denied being linked to recent cyberattacks in the US , including the May attack on Colonial Pipeline by ransom group DarkSide, which caused gasoline shortages and price hikes on the East Coast.

Hackers also infiltrated New York's Metropolitan Transit Authority in April , The New York Times first reported, though the group behind the hack reportedly has links to the Chinese government. The hackers did little damage and did not access train controls, according to MTA officials.

South Carolina Sen. Lindsey Graham, also a Republican, on Sunday made similar remarks about Russia and the recent attacks on the US cyberinfrastructure.

"Our critical infrastructure is very exposed and we need to harden it but more than anything else, we need to go on offense. You can only play defense so long," Graham said during an appearance on "Full Court Press with Greta Van Susteren."

"It's time for the Russians to pay a price here because none of this would happen without their looking the other way or actively encouraging it," he continued.

Biden will take his first foreign trip as US president this month , where he will meet with world leaders from across the globe, including a meeting with Russian President Vladimir Putin on June 16.

In an interview with the Wall Street Journal published last week, FBI Director Christopher Wray said the agency was investigating 100 different types of ransomware and said many of them linked back to Russia.

"If the Russian government wants to show that it's serious about this issue, there's a lot of room for them to demonstrate some real progress that we're not seeing right now," Wray told the Wall Street Journal.

Another Republican candidate officially tosses his hat in the ring for the seat being vacated by U.S. Senator Roy Blunt. U.S. Representative Billy Long made the announcement Tuesday night on Fox News. “It’s probably the worst kept secret in Missouri politics, but I’m entering the race for United States Senate....

As suspected directed-energy attacks against U.S. officials grow, Sens. Shaheen and Collins call for a new NSC coordinator position and medical care for the victims.

Sen. Lindsey Graham revealed he had tested positive for Covid-19, but the South Carolina Republican said that his "symptoms would be far worse" if he had not already received full dosages of the coronavirus vaccine. Graham attended a Saturday night party aboard the houseboat of Sen. Joe Manchin, D-W.V. At...

FORMER Speaker Newt Gingrich has likened Nancy Pelosi to Vladimir Putin and branded her the "greatest threat to constitutional liberty in our lifetime." The blistering broadside came as part of a scathing op-ed penned by Gingrich for his blog, Gingrich360.com, about what he calls Pelosi's "dictatorship." Gingrich, who served as...

Washington [US], July 29 (ANI): The US and Russia held "substantive and professional" talks on arms control and other strategic issues, the State Department said in a statement. Deputy Secretary of State Wendy Sherman led a delegation of US officials in a meeting with Russian Deputy Minister of Foreign Affairs...

The United States and Russia said Wednesday they had business-like and substantive talks in Geneva in their second effort in as many months to bring stability to a fraught relationship. The closed-door talks were a follow-up to last month's summit, also held in the Swiss diplomatic hub, between Russian President...

House GOP leaders on Thursday expressed confidence in the COVID-19 vaccine's effectiveness against the virus but said it shouldn’t be mandated for Americans as cases surge in pockets of the U.S. The GOP Doctors Caucus, along with the conference leaders, avoided directly instructing Americans to get their COVID-19 shots at...

Rep. Adam Kinzinger, one of the GOP members of the House's January 6 committee, leaned into the idea Rep. Kevin McCarthy may be subpoenaed.

Rogue governments are increasingly outsourcing cyberattacks to criminals in the borderless domain of cyberspace to wreak havoc on the U.S. and other nations around the world. China, Iran, Russia and other foreign adversaries have contracted with hackers, deployed sophisticated spyware technology and used social media platforms as tools to facilitate espionage.

Fox News Channel’s Peter Doocy asked an excellent question last night after President Joe Biden delivered remarks on his administration’s efforts to fight COVID-19: You just said there is no wall high enough and no ocean wide enough to protect us from the virus. So what is the thinking behind letting untested and unvaccinated migrants cross the southern border into U.S. cities in record numbers?

Republican Brooks seeks immunity for Jan. 6 speech, says he was not campaigning

WASHINGTON, Aug 4 (Reuters) - Republican U.S. Representative Mo Brooks asked a federal judge on Wednesday to grant him immunity from a civil lawsuit alleging a speech he delivered to then-President Donald Trump's supporters on Jan. 6 helped incite the attack on the Capitol. In a series of court filings,...

Retired Lt. Colonel Alexander Vindman believes Republicans who questioned him during the first impeachment of former President Donald Trump behaved more like his defense attorneys than legislators. Vindman, who famously testified about Trump's phone call with Ukrainian President Volodymyr Zelensky, writes in his new book Here, Right Matters that he...

Guess how long it has been since Democrats first took official action to obtain Donald Trump’s tax returns? More than two years. In May 2019, a key House committee issued a subpoena for the president’s returns. That led to a long battle in the courts that remains unresolved. Twenty-seven months...

Some Democrats are calling on House GOP Leader Kevin McCarthy to resign after he said it would be "hard not to hit" Speaker Nancy Pelosi with a the speaker's gavel.

The U.S. Senate gave its full support to the Cubans demanding freedom as lawmakers unanimously passed U.S. Sen. Robert Menendez’s resolution expressing solidarity with the protesters and condemning the communist government. “The Cuban people, in this unprecedented hour of uncertainty and need, cannot afford anything less than our full support,”...

U.S. intelligence officials face bipartisan congressional pressure to explain their use of surveillance powers, following a rebuke from a federal judge and Fox News host Tucker Carlson's high-profile dispute with the National Security Agency. "Our institutions are only as good as the American public's confidence in them," Florida Sen. Marco...

Republican Sen. Tim Scott said race is being “weaponized” by the left, referring to Democrats’ opposition to Georgia’s election law and the filibuster. In a podcast with Republican National Committee Chairwoman Ronna McDaniel, “Real America,” Scott, of South Carolina, discussed “two streams of consciousness” regarding race. “One is a political...

Infrastructure bill includes $1B for commission run by Manchin’s wife

A commission run by the wife of Democratic West Virginia Sen. Joe Manchin would receive $1 billion from the bipartisan infrastructure bill, the Infrastructure Investment and Jobs Act.