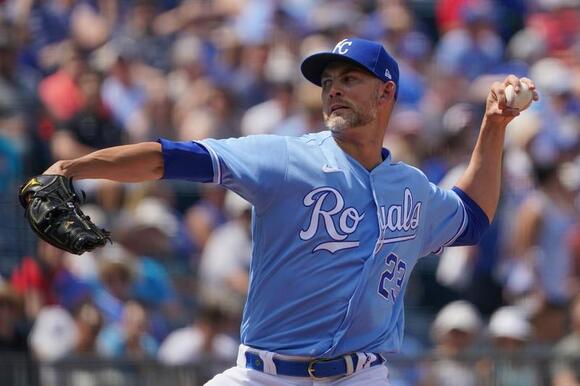 Miguel Sano belted a two-run homer in the sixth inning to fuel the visiting Minnesota Twins’ 5-4 victory over the Kansas City Royals on Saturday.

Sano came into the game with one hit in his last 25 at-bats, a home run on Friday night. He made outs his first two at-bats Saturday before connecting off Mike Minor (4-3).

The Royals had Jarrod Dyson on third base with one out in the ninth inning, but Michael A. Taylor lined into a double play. The loss snapped Kansas City’s five-game winning streak.

Jose Berrios (6-2) picked up the win despite surrendering four runs on six hits in six innings, walking two and striking out four.

Two relievers bridged the gap to Hansel Robles, who worked the ninth to pick up his fifth save in seven chances. Robles had given up a run in each of his last four appearances. The Twins’ bullpen recorded three scoreless innings on Saturday.

Minor struggled as well, allowing five runs on seven hits in seven innings. He surrendered five runs to account for all of the Twins’ runs.

The Twins scored first in the second inning on a two-run home run by Ryan Jeffers.

The Royals answered with two in the bottom of the inning on a two-out, two-run single by Whit Merrifield. A pair of singles and a walk to Nicky Lopez loaded the bases before Merrifield came through.

The Twins came right back in the third inning with a lead-off home run by Kyle Garlick. Nelson Cruz singled with two outs and stole his first base since 2018. Alex Kirilloff singled up the middle, but Cruz was thrown out at the plate by Taylor.

Lopez led off the fifth inning with a double and came around to score on Andrew Benintendi’s two-out home run, giving the Royals a 4-3 lead.

Mariners Rumors: Trading with the Twins for Michael Pineda

Most of us fans have heard by now that Jerry Dipoto is going to be looking for a starting pitcher to help the Mariners out at the deadline this year. What about bringing someone back who was here once before, giving the Minnesota Twins a call for Michael Pineda. I’m...

Tara Twins notch a pair of victories this past weekend

The Tara Twins opened up the 2021 season this past weekend by picking up a pair of victories. This advertisement has not loaded yet, but your article continues below. First, the Twins spotted the Elmira Heat a six-run lead in the opening three innings before climbing their way back into the game.

KANSAS CITY, Mo. (AP) -- Nicky Lopez drove in four runs to lead the Kansas City Royals to a 9-2 victory over the Baltimore Orioles on Friday night. Lopez cleared the bases in the second inning with a two-run single and again in the seventh with a two-run double out of the ninth spot in the batting order.

Robbie Grossman belted a solo homer to lead off the first inning to send the host Detroit Tigers to a 1-0 win over the Minnesota Twins in the first game of a doubleheader on Saturday. The switch-hitting Grossman hit right-handed and blasted a home run into the bullpen in left-center...

'Blast From the Past' with a Mystery Royal Interviews

July 12th-17th was ‘Blast From the Past with a Mystery Royal’ week. C-Dot and Rob from ‘The Drive’ brought back Royals fan favorites from years past to see what they were up to now and ask them about their time with the Kansas City Royals.

By now, we are sure that you have seen Miguel Cabrera’s walk-off bloop single to give the Detroit Tigers a 5-4 extra inning win over the Minnesota Twins. But here is Miggy’s big hit as it was called by Tigers radio play-by-play man Dan Dickerson. Let’s go!!!

Detroit Tigers rookie Akil Baddoo lost his helmet while rounding first base. Baddoo's flying helmet often signifies a stolen base, infield single, double or triple. In this situation, he was determined to reach third. Even a small stumble after touching second base didn't stop him from a stand-up triple with two outs in the second inning.

Jose Abreu doubled and tripled early, then homered to cap a five-run rally in the eighth inning that vaulted the Chicago White Sox over the Minnesota Twins, 9-5, on Tuesday night.

No Cruz, no Ohtani at Target Field

Twins fans are getting a little less Sho-time than they might have thought this series. A day after the Angels announced All-Star Shohei Ohtani would not pitch at Target Field in the four-game series between the Twins and Angels, Ohtani was out of the lineup for Friday's lineup altogether. Without him in the lineup, Los Angeles led for most of the night until the Twins chipped away before scoring two eighth-inning runs to beat the Angels 5-4.

DETROIT -- The Detroit Tigers gave the biggest Comerica Park crowd in two years a show to remember. Miguel Cabrera blooped a two-out single into center field, scoring Jonathan Schoop all the way from first base to give the Tigers a 5-4 win over the Minnesota Twins in Game 2 of Saturday’s doubleheader.

Nelson Cruz hit a sixth-inning homer and drove in the go-ahead run with an eighth-inning sacrifice fly, leading the Minnesota Twins to a 3-2 victory over the host Chicago White Sox in the first game of a doubleheader on Monday. Minnesota's Jorge Polanco added an RBI single in the top...

Zulgad: Now or never: Miguel Sano will get one final chance to prove he belongs with Twins

Two days ago, Miguel Sano was a struggling platoon player getting occasional starts at first base against lefthanded pitchers and probably wondering if this was how his time in Minnesota would end. Forty-eight hours later, Sano remained that same player with one big difference: The Twins are going to give him a final chance to prove he belongs.

KANSAS CITY (AP) — Matt Harvey ended his nine-game losing skid with his best performance in years, pitching six crisp innings Sunday to send the Baltimore Orioles past the Kansas City Royals 5-0. Harvey (4-10) had been winless in 12 starts since his previous victory May 1. The former All-Star allowed just three singles, walked one and struck out two against his former team.

CHICAGO (AP) — Max Kepler homered for a second straight game, Jorge Polanco also went deep, and the Minnesota Twins beat the Chicago White Sox 7-2 on Wednesday night. The Twins beat the AL Central leaders for just the fourth time in 16 games. They bounced back after Chicago rallied late to win Tuesday’s game and came out on top after losing five of six.

Minnesota Twins infielder Miguel Sano is not in the lineup Sunday in the team's game against the Detroit Tigers. Sano is being replaced at first base by Alex Kirilloff against Tigers starter Wily Peralta. In 258 plate appearances this season, Sano has a .196 batting average with a .705 OPS,...

Jaeden Jordahl accounted for four of the five Royals runs in a 5-1 victory over the Billings Scarlets. The Royals have now won 16 games in a row.

MINNEAPOLIS (AP) -- Andrew Heaney found his groove, retiring the last 11 batters he faced. The left-hander rediscovered his belief in his own ability, too. Jack Mayfield hit a three-run homer and Heaney finished seven innings for his longest start of the season, leading the Los Angeles Angels past Minnesota 3-2 on Thursday night after the Twins traded away All-Star slugger Nelson Cruz.