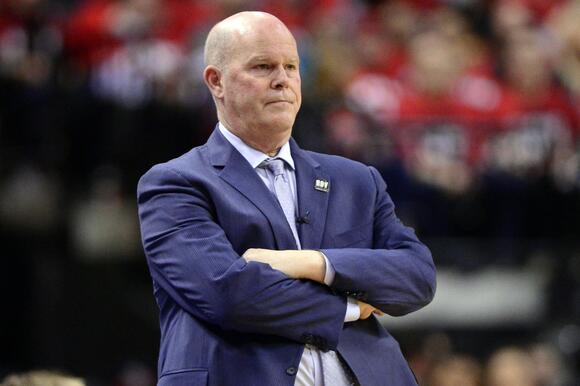 The president of basketball operations, Jeff Weltman, thanked Clifford’s contributions to the club during Saturday’s announcement.

He also said he understands the “timeline of our new path does not align with his goals as a head coach in our league.”

Clifford has been coach since May 2018.

He led The Magic to a 96-131 record during his three seasons with two playoff appearances.

The rumor mill keeps on grinding for the Golden State Warriors. Most recently, it was Cleveland Cavaliers forward Kevin Love who got linked to joining Stephen Curry and the Warriors. Now, another veteran All-Star has been thrown into the mix of possible offseason acquisitions. The Warriors, who have missed the...

The latest buzz out of New Orleans is that Zion Williamson’s family wants him traded from the Pelicans. Let’s look

The Miami Heat are a team that went to the Finals during the 2019-20 season, with Jimmy Butler as the star that led them there. It is clear that they have good pieces on the roster, but it seems as though they are a step away from true contention. This year's playoffs showed that, as they were unceremoniously swept by the Milwaukee Bucks, who are now in the NBA Finals.

These two star players reportedly have interest in joining Lakers

The Los Angeles Lakers are expected to be aggressive this summer in pursuit of a third star player, and several top free agents are said to have interest in joining them. The Lakers are likely to focus on adding another starting-caliber player to their backcourt, and Kyle Lowry and DeMar DeRozan could certainly fill that role. According to Broderick Turner of the Los Angeles Times, both impending free agents have interest in playing for the Lakers.

The NBA offseason is always a entertaining circus act to follow along with it. Seemingly every summer there are at least a couple massive trades that go down along with the draft and the standard free agency chaos. The New York Knicks figure to be right back in the middle of that somewhat controlled chaos after a 41-31 season that saw them get back to the postseason for the first time in eight years.

The Miami Heat are a team who could use a big move in the NBA offseason. They have been linked to some big-name players but have not done anything just yet. This could be the offseason that the front office has been waiting for to land a big name, either in a trade or in free agency.

Shannon Sharpe makes shocking admission, says LeBron James is no longer the best in the NBA

Shannon Sharpe, a commentator on Fox Sports 1, is known as a huge fan of LeBron James. However, he just admitted that the Los Angeles Lakers superstar is no longer the best player in the world. If Giannis Antetokounmpo is indeed now the best, he has certainly earned it. He...

The New York Knicks have been identified as one of the frontrunners to land Collin Sexton from the Cleveland Cavaliers in the offseason. The Cavs guard has been heavily linked to a move away from the Cavs this summer, and it looks like the Knicks are very interested in bringing his talents to the Big Apple.

Dennis Rodman Criticized LeBron James' Style Of Play: "He Doesn’t Have Any Moves. The Only Move He Has Is Straight Down The Line. His Game Is Too Simple."

Dennis Rodman has had some harsh words for LeBron James over the past couple of years. The 5x NBA champion played with great players, whom he believes are better than The King. When he talks about Michael Jordan and Scottie Pippen, Rodman has nothing but great things to say. When...

Recent reports have suggested that free agents DeMar DeRozan and Kyle Lowry have an interest in joining the Los Angeles Lakers this offseason. The two were former teammates with the Toronto Raptors and helped the franchise achieve its most success from 2013 to 2018. The last three years, the two have been apart since the Raptors traded DeRozan to the San Antonio Spurs, where he has played ever since.

Bobby Portis Explains Why He Left The New York Knicks: “I Just Wanted To Go To A Winning Culture"

Bobby Portis is having a fantastic season with the Milwaukee Bucks right now. The big man from the University of Arkansas joined the Bucks during free agency in 2020. Since then, he has been a key role player for the Bucks throughout the season. Because he plays a similar position to star player Giannis Antetokounmpo, he doesn't get much playing time. However, Portis has come up big for the Bucks whenever he's been asked. So far, his stint with the Bucks has been going very well.

Dennis Schroder struggled during his first season with the Los Angeles Lakers. After a solid year with Oklahoma City, where Schroder was in the running for Sixth Man Of The Year, the Lakers traded for him during the offseason. Schroder was seen as a replacement for Rajon Rondo, someone who could come in when LeBron James and Anthony Davis rested and coordinate the offense. And while he had a modest start, he encountered struggles in the second half of the season.

The Houston Rockets traded Russell Westbrook before the 2020-21 NBA season began, and then they traded away James Harden in January, thus entering a new era of Rockets basketball. With young players already making a name for themselves in Houston in Christian Wood, Jae’Sean Tate, Kevin Porter Jr. and Kenyon...

It appears that Los Angeles Lakers assistant coach Lionel Hollins is no longer with the franchise. Hollins, 67, has been an assistant under head coach Frank Vogel’s leadership for the Lakers for two years. While the Lakers won a title in Hollins’ first year on the bench, they were eliminated...

NBA Rumors: The Lakers Are Considering Trading For A Breakout Star Comparable To Michael Jordan

This was supposed to be the Philadelphia 76ers’ year given that Joel Embiid was playing like a true NBA MVP candidate, Tobias Harris was putting up borderline All-Star numbers and Philly had arguably their best supporting cast ever, but things didn’t turn out the way they had imagined. The 76ers...

The Deadliest Kryptonite For The Los Angeles Lakers: LeBron James Is 8-17 Against Danny Green, Anthony Davis Is 2-25 Against Stephen Curry

The Los Angeles Lakers are expected to come back with a vengeance next season, after falling to the Phoenix Suns in the first round of the playoffs. LeBron James will be 37 years old at some point next season, and Anthony Davis is struggling with injuries. But in terms of pure talent on the roster, the Lakers are still the team to beat in the West when healthy.

Who Are the Biggest Threats to Sign Kawhi Leonard?

As a wise master once said, “always in motion is the future.” This expression is particularly true when it comes to the enigmatic Kawhi Leonard. While staying the course and remaining in Los Angeles seems to be the most likely outcome of Leonard’s potential free agency (it’s still not certain that he’ll be opting out of the final year of his current contract), NBA insider Marc Stein reported last week that “the notion that Leonard is unattainable seems to be waning a bit as the Aug. 2 start of free agency nears.”