By Schuyler Callihan
Posted by
MountaineerMaven
2021-06-05 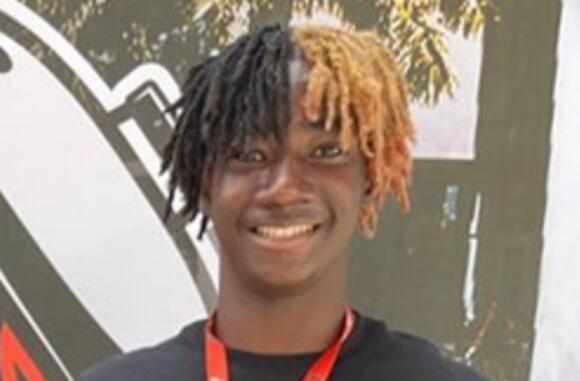 "I'm very excited about the WVU offer, it was unexpected," Robinson said. "I think WVU is a great school and I look forward to learning more about the program. I loved watching Tavon Austin play, he was a great athlete. I love the way he impacted the game. I want to be able to be that type of player too but on the other side of the ball."

With it being in the early stages of his recruitment, Robinson doesn't have the ability to speak with the coaching staff but says he is excited to get to know the coaches down the road.

"I look forward to developing a relationship with all the coaches moving forward including Coach Jackson, who offered me. I absolutely plan to visit as well. I've been in contact with WVU about possibly visiting later this month."

In addition to his offer from WVU, Robinson also holds offers from Penn State, Syracuse, Rutgers, and Utah State.

"I plan on committing the summer leading into my senior year after I take my official visits."

The West Virginia University Department of Intercollegiate Athletics has released its 2021 football home game promotional schedule for this fall. Milan Puskar Stadium will return to 100% fan capacity with full stadium operating procedures, pregame tailgating in the stadium parking lots and the complete game-day experience. The home opener against...

Making the Case for WVU to Get Into the ACC

ACC country has mixed feelings on the possibility of adding West Virginia to the league. Some believe it's a perfect fit as it would add tremendous value to the conference in both football and basketball and it would bring back old rivalries. Meanwhile, there are others that don't want to see WVU get in simply due to the "small market" and "not living up to the ACC's academic standards".

Could West Virginia Really End Up in the American Athletic Conference?

This conference realignment stuff is starting to get really whacky. In the last week, we've seen Big 12 powers Oklahoma and Texas inform the league they plan to leave the conference and join the SEC, the possibility of a Big 12/PAC 12 merger was discussed, and now, the Big 12 has it out for ESPN.

The Mountaineer Ticket Office has announced that single-game ticket sales have been suspended for the WVU-Virginia Tech football game on Sept. 18 pending potential returns from the visiting team allotment closer to game day. Fans still looking to purchase single-game tickets for the WVU-VT matchup are reminded to visit StubHub.com,...

Are you looking for the inside scoop on West Virginia football recruiting? Subscribe to Mountaineer Maven, with in-depth and exclusive information brought to you by Schuyler Callihan, a name you can trust, and his staff. Subscribe today and get the first month of an annual membership for just $1, or a full annual membership at an almost 20% discount!

The 2021 NBA Draft is just one day away which means we are just one day away from finding out where former West Virginia guard Miles McBride will begin his professional career. Some mock drafts have McBride going as high as No. 19 overall to the New York Knicks while...

On Thursday, the Louisville Sports Commission named West Virginia receiver and returner Winston Wright Jr. to the 2021 Preseason Paul Hornung Watch List. Winston Wright Jr. hauled in a team-leading 70 receptions and led the team with 553 last season to go with two touchdowns, including two 100 yard+ performances, both coming on the road versus Texas Tech (126) and Oklahoma State (127). The junior has nabbed 66 receptions for 650 yards and two touchdowns in his Mountaineer career. In addition, he is averaging 22.9 yards per kickoff return with a touchdown during his career.

Like it or not, conference realignment has officially begun for the 2nd time in the last ten years. Oklahoma and Texas got things started on Monday by informing the Big 12 Conference of their intentions to leave the league and join the SEC. With the Big 12 set to lose its top two members, the league is on the verge of collapsing. The remaining eight members will now have to weigh their options and make a decision on whether or not to stick out and see if the Big 12 can survive the loss of its biggest brands.

West Virginia tight end Mike O'Laughlin was recently named to the 2021 John Mackey Award Preseason Watch List, given annually to the most outstanding collegiate tight end selected by the John Mackey Award Selection Committee. O'Laughlin has hauled in 21 receptions for 161 yards and a touchdown during his Mountaineer...

Year three of the Neal Brown era is just a little over one month away from getting underway so with that in mind, I thought it would be a good time to bust out my 2021 game-by-game predictions. Have a look below!. 9/4 at Maryland - Win. This game is...

West Virginia University fans will be given the opportunity to get autographs from Mountaineer players and coaches and watch practice at the football team’s annual Fan Day on Saturday, Aug. 7. Coach Neal Brown, assistant coaches and WVU players will sign autographs and visit with fans from 9 a.m. to...

It's seeming more and more likely that West Virginia is going to be playing in a new conference sometime in the near future as the Big 12 is set to implode. With Oklahoma and Texas expected to bolt for the SEC, the Big 12 stands almost no chance of surviving, meaning the other eight remaining schools will be forced to find a new conference to join.

West Virginia athletic director Shane Lyons has done a terrific job of leading WVU athletics since 2015 and is facing a new challenge of keeping the Mountaineers in a Power Five conference after Texas and Oklahoma sent a joint letter to SEC commissioner Greg Sankey to apply for membership Tuesday morning.

Pick Six Previews recently released its 2021 Preseason Preview and named West Virginia defensive lineman Dante Stills and receiver Winston Wright Jr. to the Preseason All-Big 12 Second Team. Stills led the Mountaineers in tackles for a loss with 10.5 and the defensive line group with 35 tackles during the...

Monday afternoon, Jon Rothstein reported that WVU big man Pauly Paulicap has received clearance to play this season for the Mountaineers. Paulicap transferred in from DePaul earlier this summer. During his one year at DePaul, Paulicap averaged 7.2 points, 6.1 rebounds, 0.5 steals, and 1.2 blocks per game while shooting...

Bob Bowlsby Accuses ESPN of Conspiring Against the Big 12

Class of 2023 WVU commit James Okonkwo (6'8", 210 lbs) of Beckley Prep will reclassify and will be a part of the WVU program this upcoming season with the intentions of redshirt, per a report from Greg Carey of MetroNews. Okonkwo just finished up his sophomore year so he will be skipping the final two years of his high school career as mentioned in Carey's report.

According to Adrian Wojnarowski of ESPN, the Phoenix Suns have traded guard Jevon Carter to the Brooklyn Nets for Landry Shamet and the 29th overall pick in the 2021 NBA Draft. The former West Virginia Mountaineer guard averaged 4.5 points, 1.3 assists and 0.6 in his two seasons with the...

Statement by WVU athletic director Shane Lyons released by WVU Athletics Communications. For the past nine years, West Virginia University has been a loyal member of the Big 12 Conference. We have valued the partnership with the other nine members and have served the league as a prestigious academic institution and a nationally recognized athletics program. We are disappointed that two of our Big 12 institutions have indicated their intent not to extend their media rights beyond 2025.