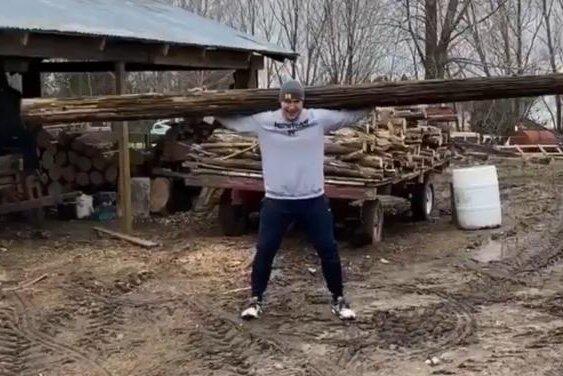 June 4 (UPI) -- The Tennessee Titans have signed Adam Coon, a three-time NCAA All-American wrestler who will play on the offensive line.

Coon compiled a 116-15 record while wrestling at the University of Michigan, but he never played football for the Wolverines.

The 6-foot-5, 300-pound Coon was a four-time high school state champion in wrestling and was named the Detroit Athletic Club High School Athlete of the Year as a senior at Fowlerville High School in Michigan.

Coon was an all-state linebacker at Fowlerville in 2012 and was an all-time honorable mention offensive lineman in 2010-11.

The 26-year-old Coon earned a spot on the men's Olympic wrestling team earlier this year, but he failed to qualify for this year's Games through the World Olympic Qualifier last month in Bulgaria.

Now, the decorated wrestler has turned his focus to football. He is expected to compete for a spot on the interior of the offensive line, most likely at guard.

Tennessee also placed cornerback Kevin Johnson on the reserve-retired list Friday. He signed a one-year contract with the Titans earlier this off-season.

Aaron Rodgers Reportedly Makes Decision on Opting out of 2021 Season

Aaron Rodgers could opt-out of the 2021 season with zero obligations to the Green Bay Packers for not playing. However, it looks like Rodgers is going to play the wait-and-see game before making any big decisions. According to Mike Florio of Pro Football Talk, Rodgers isn't likely to opt-out before the Friday, July 2 deadline. Florio said Rodgers "won’t be ready to give up on playing this year" by the end of this week.

After a strange 2020-21 campaign due to the COVID-19 pandemic, the NFL is looking to return to normalcy in 2021-22 — at least somewhat, anyway. With teams trying to find ways to compete this time around, while spending money appropriately and responsibly throughout the offseason, there are still more than a few unrestricted free agents currently out on the open market.

Olympic sprinter Sha’Carri Richardson has been suspended for a month after a positive marijuana test. In turn, reactions from across the globe poured in and many are upset with the penalty handed to Richardson, who won’t be able to compete in her event with the month-long suspension. Kansas City Chiefs quarterback Patrick Mahomes was the latest to show his frustration with the situation.

TJ Watt Engaged to Sister-in-Law Kealia Ohai's Former Teammate: 'I Am the Luckiest Man in the World'

The Pittsburgh Steelers outside linebacker announced his engagement to girlfriend Dani Rhodes on Thursday night. "I am the luckiest man in the world," he captioned a series of photos from the special moment, which included a shot of the NFL player, 26, down on one knee. "YES. YES. YES 💍,"...

There was some confusion earlier week as to why the Seattle Seahawks released rookie wide receiver Tamorrion Terry. Well, the NFL world just found out why the front office quietly cut him. According to Adam Beasley of the Miami Herald, a grand jury in Georgia indicted Terry and 10 others...

Rashad Weaver is 23 years old and has had the love and support of his family during his life. But the Tennessee Titans rookie now says he feels “betrayed” over a horrific incident involving his mother. Weaver said on Twitter this week that his mother gave him some unwelcomed news...

As the nation strives to get more people vaccinated, the debate on whether to get a COVID-19 shot is happening everywhere, including in the NFL, and former Eagles defensive end Chris Long said he would persuade players to get the shot if he were still playing. In June, the NFL...

Tennessee Titans schedule takeaways: Julio Jones will make his Titans’ regular-season debut in Week 1 against the Arizona Cardinals, a

Former Titans Running Back Calls it a Career

No one can Bishop Sankey did not try. It was evident long ago that the Tennessee Titans were not going to get anything close to a return on their investment when they made Sankey the first running back selected in the 2014 NFL Draft. Taken in the second round (54th...

Over the past few days, there have been countless Aaron Rodgers rumors floating around NFL circles. The latest rumor states that he could potentially retire, albeit this speculation emerged simply because oddsmakers are changing their stance on the Green Bay Packers. NFL insider Benjamin Allbright had some interesting information to...

The 2020/21 campaign was tremendous for the Phoenix Suns, despite falling short in the NBA Finals against the Milwaukee Bucks. Nevertheless, the future looks bright for this organization. Just days removed from losing Game 6, the Suns have already lost a key figure of their front office:. Most people won’t...

Ben Jones #60, A.J. Brown #11, Tennessee Titans (Photo by Frederick Breedon/Getty Images) Let’s get this out of the way immediately. This is very important if you’re a Tennessee Titans fan. The NFL Superstar Club doesn’t really exist. It’s an invention of . We’re sorry to break the news to you.