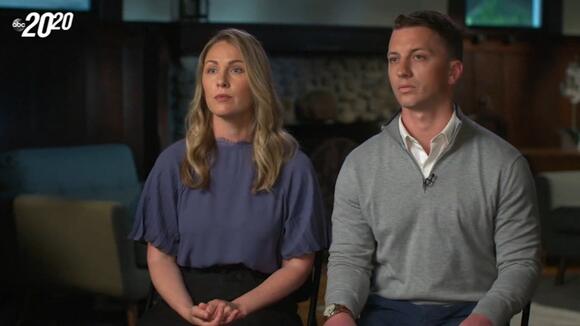 More than six years after a Vallejo woman was kidnapped , the Vallejo Police Department is publicly apologizing for calling her and her then-boyfriend liars. Matthew Muller is serving a 40-year prison sentence for kidnapping Denise Huskins. He's also now facing state charges; kidnapping for ransom, two counts of forcible rape, robbery, burglary and false imprisonment. TIMELINE: Denise Huskins, Matthew Muller Vallejo kidnapping case "Every moment in captivity I kept picturing him, um, I kept just visualizing what that feeling must be like to finally feel safe in his arms again," said Denise Huskins to ABC Anchor Amy Robach. Huskins described being kidnapped and raped by Matthew Muller in a new interview with Robach. The couple will be featured in a two-hour ABC "20/20" special Friday night at 9 p.m. They also have a book coming out next week titled: "Victim F From Crime Victims To Suspects To Survivors." MORE: Survivors of Vallejo 'Gone Girl' case reflect on life-changing experience

A California couple at the center of the 2015 kidnapping known as the real-life "Gone Girl" is now speaking exclusively to ABC News.

In March of 2015, Muller broke into Aaron Quinn's home where he drugged, blindfolded and tied up the couple before kidnapping Huskins. In newly-obtained interrogation video, Quinn describes to Vallejo Police Detective Mat Mustard the instructions Muller gave him. "They told me the area I needed to stay in my house, said that there was going to be video recording to monitor and make sure that I don't contact anyone," said Quinn to Detective Mustard in the interrogation video. "I acknowledged this sounds like it's a movie. I know it sounds bizarre," Quinn told Robach. Too bizarre for Detective Mustard. "I'm telling you, it did not happen the way that you're describing it. It did not. Period," said Mustard to Quinn. "I didn't hurt her. I didn't do any of that," Quinn responded in the interrogation video. ABC7 News I-Team reporter Melanie Woodrow has covered the case since 2015. She asked Robach what surprised her most about the way police treated Quinn in the hours following Huskins' kidnapping. I-TEAM EXCLUSIVE: Vallejo police face new misconduct allegations in 'Gone Girl' kidnapping case "To see how Aaron Quinn was treated immediately by police, accused of being a killer," said Robach. "Being sleep deprived, being asked the same question over and over and over again," she continued. "He said 'I understand why people falsely confess,'" said Robach, referring to Quinn. After terrorizing Huskins for two days at his home in South Lake Tahoe, Muller dropped her off in Southern California near her parents' house. EXCLUSIVE: Vallejo police told to 'burn that b***h' in 'Gone Girl' case "You know it's a street I've walked down hundreds of times in my life. As I'm stumbling, still sedated, just walking down this street, all I wanted to do was to hug my mom and dad and finally feel safe." said Huskins. But that safety was short lived. The Vallejo Police Department went from accusing Quinn of murder to accusing the couple of staging an elaborate hoax. "The fact that we've essentially wasted all these resources for really nothing is upsetting," said Vallejo Police Department Lieutenant Kenny Park in March of 2015. RELATED: Couple at center of kidnapping Vallejo police called hoax break their silence

The couple at the center of the kidnapping Vallejo police called a hoax are sitting down with Amy Robach for an in-depth interview on ABC 20/20.

"It is Mr. Quinn and Ms. Huskins that owes this community an apology," Park continued. "So not only did they go through this horrific situation and ordeal but then lived under a cloud of suspicion for months," said Robach. Until June of 2015, when Muller struck again, this time leaving his cellphone behind in a foiled Dublin home invasion. It was former Dublin Police Detective Misty Carausu who alerted the FBI that Muller could be Huskins' kidnapper. "I thought this is beyond crazy," said Carausu. "She said wait there's a connection," said Robach. RELATED: Denise Huskins recounts her 'nightmare'

The couple at the center of the 2015 kidnapping case the Vallejo Police Department called a hoax is speaking publicly for the first time in an exclusive ABC News interview.

"If it weren't for her detective work, they probably would still be un-believed to this day," Robach continued. The city of Vallejo settled a civil lawsuit with the couple for $2.5 million. Even though Muller pleaded guilty to kidnapping Huskins and is serving a 40-year prison sentence, the Vallejo Police Department has never publicly apologized to the couple until now. The city of Vallejo and Chief Shawny Williams sent the I-Team an emailed statement: "The Huskins Quinn case was not publicly handled with the type of sensitivity a case of this nature should have been handled with, and for that, the City extends an apology to Ms. Huskins and Mr. Quinn. On July 20, 2015, letters from former Police Chief Andrew Bidou to Ms. Huskins and Mr. Quinn indicated that once an indictment against Matthew Muller was complete, the VPD would make a public apology to the victims. Based on the comments of Ms. Huskins, while the July 20, 2015 letter was a public document, it appears that the follow up personal public apology did not take place. 'What happened to Ms. Huskins and Mr. Quinn is horrific and evil. As the new Chief of Police, I am committed to making sure survivors are given compassionate service with dignity and respect. Although I was not chief in 2015 when this incident occurred, I would like to extend my deepest apology to Ms. Huskins and Mr. Quinn for how they were treated during this ordeal.'" "I knew our lives had changed forever and that we're going to go through a lot more struggles but like we're together," said Quinn. "We had each other now," he continued. RELATED: Convicted Vallejo kidnapper Matthew Muller will stand trial on rape charges Matthew Muller's attorney, Thomas Barrett, tells the I-Team, "Mr. Muller suffers from a severe and debilitating mental illness that has rendered him incompetent to stand trial. As such, criminal proceedings are suspended unless and until his mental competency is restored." The Solano County DA's Office says he's expected to return to court July 1.
View All 3 Comments