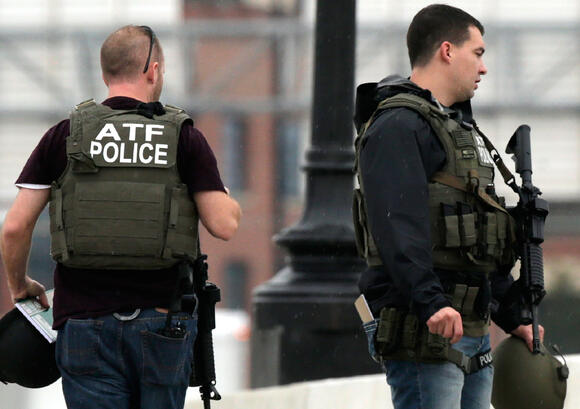 (DETROIT) After 40 people were charged in a 172-page racketeering indictment in a Detroit federal court Thursday, four men are still at large in connection with the Vice Lords gang with ties to Detroit and Chicago, WXYZ Detroit reports.

The massive indictment carries a total of 39 counts against 40 alleged Vice Lords members that include racketeering, drug and conspiracy gun charges.

In a news conference Thursday, Acting United States Attorney Saima Mohsin talked about the indictment and the message that it is designed to send to violent gangs.

“By working together, our law enforcement partners are dismantling violent street gangs that cause havoc in our neighborhoods,” Mohsin said, according to WXYZ. “As we welcome the start of summer we want to send a message to gangs and violent offenders that law enforcement is committed to taking back our streets from violent gangs so that Detroit residents can enjoy the safe quality of life that we all deserve.”

“Today was pretty much a reckoning,” Deir said, according to Click On Detroit. “And the reckoning is the city of Detroit has had enough and the federal government has had enough.”

The Almighty Vice Lord Nation gang was founded in Chicago in the 1960s.

The Detroit ATF urges anyone with information regarding the mens' whereabouts to contact them.

These Detroit companies are looking for workers to start immediately

(DETROIT, MI) Here are today’s top stories from the Detroit area. We’ve got you covered on the latest developments in your community. For more stories like these, click here.

(DETROIT, MI) Your life never stops, and neither does our commitment to keeping you up-to-date on the hottest trend and lifestyle stories. We’ve got you covered on the latest lifestyle stories in your community. For more stories like these, click here.

(DETROIT, MI) Detroit sports? We track local sports stories 24 hours a day, seven days a week. Pulled from contributors around the region, here’s a glimpse of what people are talking about now in Detroit sports. For more stories from the Detroit area, click here.

Forgotten Harvest to donate 150,000 meals across metro Detroit through August

(DETROIT) Forgotten Harvest’s Healthy Foods, Healthy Kids program will be providing 150,000 meals to children across metro Detroit through mid-August. Per WXYZ Detroit, the program's goal is to ensure that kids who are out of school, and may not have access to daily meals at home, don't go hungry over the summer.

(MICHIGAN) Detroit-based Buddy's pizza restaurant chain will be opening two new Michigan locations in 2022, the Detroit Metro Times reports. According to a press release, the two new locations will be at 5510 Shashabaw Road in Clarkston, and 2010 W. Grand River Avenue in Okemos.

Live events on the horizon in Detroit