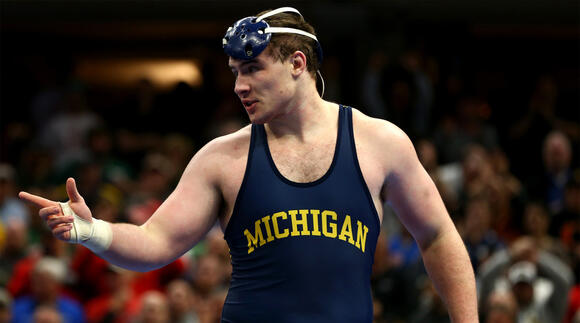 After failing to qualify for the 2021 Olympic Games through the World Olympic Qualifier last month, decorated wrestler Adam Coon has agreed to terms with the Titans.

The 6'5", 300-pounder will compete on the offensive line, most likely on the interior at guard.

During his college wrestling career at Michigan, Coon compiled a 116-15 record and became a three-time NCAA All-American. Earlier this year he earned a spot on the men's Olympic wrestling team, but during the last-chance qualification tournament, Coon lost 6-3 to Urkraine's Mykola Kuchmii in the 130-kilogram Greco-Roman quarterfinals.

Off the field, he was a four-time state champion in wrestling.

Olympic sprinter Sha’Carri Richardson has been suspended for a month after a positive marijuana test. In turn, reactions from across the globe poured in and many are upset with the penalty handed to Richardson, who won’t be able to compete in her event with the month-long suspension. Kansas City Chiefs quarterback Patrick Mahomes was the latest to show his frustration with the situation.

There was some confusion earlier week as to why the Seattle Seahawks released rookie wide receiver Tamorrion Terry. Well, the NFL world just found out why the front office quietly cut him. According to Adam Beasley of the Miami Herald, a grand jury in Georgia indicted Terry and 10 others...

As the nation strives to get more people vaccinated, the debate on whether to get a COVID-19 shot is happening everywhere, including in the NFL, and former Eagles defensive end Chris Long said he would persuade players to get the shot if he were still playing. In June, the NFL...

Justin Herbert shocked NFL fans with his tremendous rookie campaign in 2020, but can the Los Angeles Chargers challenge the Kansas City Chiefs in the AFC West? Former MVP Patrick Mahomes isn't worried. During the American Century Championship, a celebrity golf event at Lake Tahoe, a fan told Mahomes to...

The 2020/21 campaign was tremendous for the Phoenix Suns, despite falling short in the NBA Finals against the Milwaukee Bucks. Nevertheless, the future looks bright for this organization. Just days removed from losing Game 6, the Suns have already lost a key figure of their front office:. Most people won’t...

Mike Leach on the Air Raid, the Tennessee coup and more

Mike Leach's first SEC Media Days appearance didn't disappoint. Mississippi State's second-year head coach took the podium and told reporters to get straight to questions. He discussed his offense, the transfer portal, and his past interest in the Tennessee job on the main stage. Bulldog linebacker Aaron Brule and receiver Austin Williams then spoke after their head coach.

While opinions differ on where the Tennessee Titans’ roster stands as a whole because of their defense, there is little to debate when it comes to how good the team’s offense stands to be in 2021. After all, an elite offense that already sported a top-notch offensive line and three...

No. 1 overall pick Trevor Lawrence will be 'full-go' for Jaguars training camp

Breathe easy, Jacksonville Jaguars fans, and know your new star should be on the field when the club opens training camp July 27. Rookie quarterback Trevor Lawrence dealt with a lingering hamstring issue during last month's mandatory minicamp, but NFL Network's Judy Battista reports the first overall selection of this year's draft will be a "full-go" for the start of training camp.

Clemson Tigers fans probably aren’t fretting too much about D.J. Uiagalelei taking the reins of the offense from legendary quarterback

The New England Patriots were set to have a plethora of key players returning to the club in 2021 after opting out last year. Key among them was safety Patrick Chung. Instead, the 33-year-old veteran noted that he woke up one morning this past spring and realized it was time for him to call it a career and retire. While most folks found out about Chung's retirement via a post on social media, the safety naturally had to inform those within the Patriots organization directly. That includes Bill Belichick, which Chung recently admitted was one of the more difficult conversations he's had in quite a bit.

ESPN projects Titans will have among worst pass-protecting offensive lines

The Tennessee Titans saw vast improvement from their offensive line in 2020, as not only did the unit pave the way for a 2,000-yard season for Derrick Henry, but it allowed 31 less sacks than the year prior. However, ESPN’s Seth Walder ranked every offensive line in the NFL ahead...

HOOVER, Ala. — There’s something different about when Nick Saban shows up in Hoover. It’s not just that he’s got a swarm of people around him everywhere he goes. It’s an aura that surrounds him. It’s evident when he speaks. There’s a reason that he’s the greatest coach of all-time, and even in his 19th SEC Media Days, Saban’s presence still feels unlike any other.