By Schuyler Callihan
Posted by
MountaineerMaven
2021-06-04 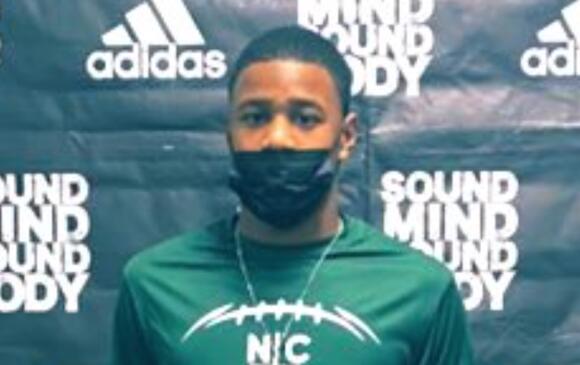 "Sheesh man, I was so happy," Snowden said of the WVU offer. "I talked to Coach Wright and he said he was impressed with me and wanted to offer me, so for the rest of the day I was a happy man. They're such a great school. The first thing I thought of was Tavon Austin and Daryl Porter Jr."

Snowden says he doesn't have any connections to Porter Jr. but believes he is the next great from WVU. However, he does have a relationship with former West Virginia running back Martell Pettaway but the two have yet to talk about the offer.

Snowden tells Mountaineer Maven that he is hoping to take a visit to WVU sometime soon but has to work it out with his baseball schedule. Snowden is considering playing both sports at the next level but remains undecided.

He also holds offers from Nebraska, Eastern Kentucky, Central Michigan, Bowling Green, Syracuse, and Liberty and does not have a leader in his recruitment at this time.

"No, not yet. I love all of them for giving me a chance. I thank God every day for the blessings. I will make a decision probably around the end of my junior year."

If your last name is Herbert, you’re already in good standing with the Oregon football faithful. For Patrick Herbert, he’s trying to be more than just “Justin’s little brother” in 2021, fighting for that starting tight end job with the likes of Spencer Webb, Terrance Ferguson, Moliki Matavao, Cam McCormick, and DJ Johnson.

Class of 2023 four-star defensive back Ryan Robinson (Edna Karr) may still have a little ways to go in his high school career, but he's caught the attention of multiple college programs across the country. Robinson was one of many Louisiana prospects to participate in the "ABX Battle of the...

The Buffalo Bills have revamped their defensive line numerous times over the last five years. General manager Brandon Beane has given the squad plenty of options when it comes to pass rushers, as he has allocated draft capital and financial resources to improve the defensive line. Not all of these...

The brewing rivalry with Minnesota’s P.J. Fleck and Nebraska’s Scott Frost took a step forward on Thursday. While speaking at the podium at Big Ten Media Days, Frost gave his comments on “Sloganeering” and appeared to take a shot at Fleck for his “Row The Boat” mantra. “I’m not into...

Recruiting Home Search Recruits Recruiting Board 2022 Top Targets. The top player in Hawaii and possibly the top linebacker in the country holds Clemson's interest. Four-star Kahuku, Hawaii linebacker Tausili Akana announced a Clemson offer on Saturday with a set of pics from his Clemson camp visit. "Truly blessed and...

Rookie defensive tackle Jaylen Twyman reported to Vikings training camp over the weekend, but he won’t be playing for the team this season. Twyman was shot four times while in Washington, D.C. last month and avoided major injury, but the Vikings announced on Monday that the sixth-round pick has been waived with a non-football injury designation. The move cleared space on the roster for wide receiver Dede Westbrook after he agreed to a one-year deal with the team over the weekend.

The Michigan State Spartans put out an offer in the 2024 recruiting cycle to a player whose name will sound awful familiar to Spartan fans. Tom Izzo and his staff offered 2024 prospect Jason Richardson Jr., son of former Spartans great Jason Richardson. Richardson comes out of Bishop Gorman High...

Godwin: I'm happy to be a Pirate

East Carolina alum and baseball coach Cliff Godwin confirmed Monday he interviewed with LSU last month, but he said he is fully committed to continue leading the Pirates. Godwin was a candidate, along with Ole Miss coach Mike Bianco and the eventual LSU hire Jay Johnson from Arizona, during late June. Godwin said he was not offered the position.

West Virginia University Director of Athletics Shane Lyons has announced the 2021 women’s soccer nonconference schedule. Along with a pair of exhibition matches, the Mountaineers are slated to compete in nine regular-season, nonconference contests, with seven taking place at Dick Dlesk Soccer Stadium in Morgantown. WVU will kick against three teams that qualified for the 2020 NCAA Tournament, including a College Cup semifinalist.

Junior right-handed pitcher Madison Jeffrey became the third Mountaineer to be drafted in the 2021 MLB First-Year Player Draft. Tuesday afternoon, Jeffrey was selected in the 15th round (462nd overall) by the Los Angeles Dodgers. During his first three years at West Virginia, Jeffrey made 36 appearances (all in relief)...

Senior Jarret Doege is entering his 2nd full season as the West Virginia starting quarterback and although he's had some good moments, his play has been far from stellar. That said, there is still room for Doege to grow, and having a normal offseason should benefit him greatly. A recent...

Over the course of the next few weeks, we will be taking a look at each position group and giving our way-too-early depth chart projections. Today, we move onto the cornerbacks. Starters: Nicktroy Fortune, Jackie Matthews. Nicktroy Fortune has been rock solid in his first two years as a starting...

Former West Virginia forward Derek Culver has been garnering more and more attention from NBA teams over the past few weeks and most recently worked out with the Charlotte Hornets on Wednesday. The Hornets took a major step in their rebuild this past season with the addition of LaMelo Ball...

WVU may be very happy now.

They should stay where they are if it's working. However if for some reason, and there are those pushing it, the BIG XII moves further west WVU might not like it as much. I'd like to see the ACC position itself as an alternative that works.

On Thursday, ESPN Events released the matchups for five of the six early-season men's basketball tournaments, revealing the West Virginia University Mountaineers will meet the Elon University Phoenix on Thursday, November 18, at approximately 9:00 pm EST and broadcasting ESPN2 in the first round of the 2021 Shriners Children's Charleston Classic.

Neal Brown: "We Have Momentum in Recruiting"

Are you looking for the inside scoop on West Virginia football recruiting? Subscribe to Mountaineer Maven, with in-depth and exclusive information brought to you by Schuyler Callihan, a name you can trust, and his staff. Subscribe today and get the first month of an annual membership for just $1, or a full annual membership at an almost 20% discount!

Now that the NCAA is allowing student-athletes to profit off of their name, image, and likeness, several players around the country are signing deals with companies for advertising and even releasing their own merchandise. Senior West Virginia linebacker Josh Chandler-Semedo has now joined in on the action by selling his...

Former NFL tight end Antonio Gates never played college football before becoming one of the greatest tight ends in NFL history. But his son, 2022 four-star wideout Antonio Gates Jr., will get to play football – and at one of the schools his father tried to ply his trade. On...

We are under two months away from the start of the 2021 college football season and with fall camp set to begin here in the next few weeks, I wanted to take a peek around the Big 12 and the quarterback position. Below, I ranked each team's projected starter 1-10.