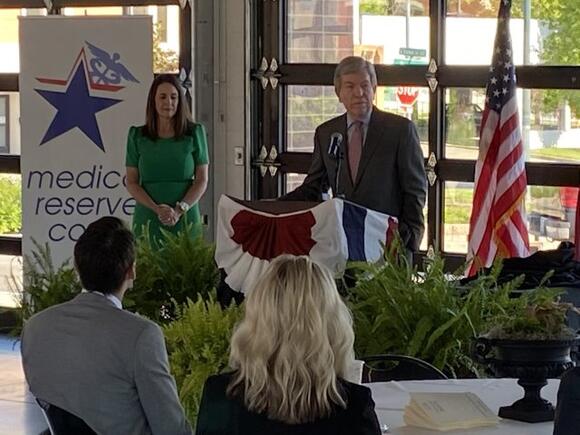 The award, which was established in 1974 by the City of Independence, is presented annually to an outstanding American citizen who "best typifies and possesses the qualities of dedication, industry, ability, honesty and integrity that distinguished President Harry S. Truman," according to the city's website.

Sen. Blunt is the 47th recipient of the National Honor and will join the elite list of honorees which includes: former presidents Jimmy Carter, Gerald Ford and Bill Clinton; World War II veteran and U.S. Senator Robert J. Dole, and most recently former Sen. Claire McCaskill, among others.

New evidence showing the delta variant is as contagious as chickenpox has prompted U.S. health officials to consider changing advice on how the nation fights the coronavirus

Airlift begins for Afghans who worked for U.S. during its longest war

WASHINGTON, July 30 (Reuters) - Some 200 Afghans were set to begin new lives in the United States on Friday as an airlift got under way for translators and others who risk Taliban retaliation because they worked for the United States during its 20-year war in Afghanistan, U.S. officials said.

House Democratic leaders are scrambling to tee up a Friday vote on a bill that would extend a federal eviction ban through the end of the year with just two days before it expires. The House Rules Committee on Friday morning debated a bill from Rep. Maxine Waters (D-Calif.) to...

President Biden announced Thursday that he will require all federal workers to be vaccinated against the coronavirus or submit to frequent testing. Biden laid out a plan incentivizing Americans to take the vaccine, including paid time off to get vaccinated and $100 payments to Americans who get vaccinated, paid for by government. The president also said that federal workers will be forced to take the vaccine or be required to be tested regularly.

How does the new CDC mask guidance change how families stay safe from Covid-19? An expert's take

(CNN) — The US Centers for Disease Control and Prevention issued new guidance on Tuesday that recommended a return to indoor masking, even for vaccinated people, in parts of the country with high and substantial coronavirus spread. The agency also urged that schools require masks for all students, teachers and visitors.

Israel rolls out coronavirus booster shots to people over 60

Israel on Friday began providing coronavirus booster shots to people over 60 who have already received two doses of a vaccine, according to the Associated Press. Israeli Prime Minister Naftali Bennett announced the news Thursday, making Israel the first country to offer a third dose of a Western vaccine to citizens on a large scale, the AP noted.

What are the 'twisties?' Simone Biles explains gymnastics struggle at Tokyo Olympics

Simone Biles said she was still suffering with "the twisties” on Friday and "literally can not tell up from down," raising serious doubts about whether she will be able compete in her individual events at the Tokyo Olympics. Biles pulled out of the team all-around final Tuesday after struggling on...

A Hong Kong protester was sentenced to nine years in prison on Friday just days after a court convicted him in the city’s first trial under a new national security law that the Chinese government has used to curb dissent and opposition voices within the territory. Tong Ying-kit, 24, was...