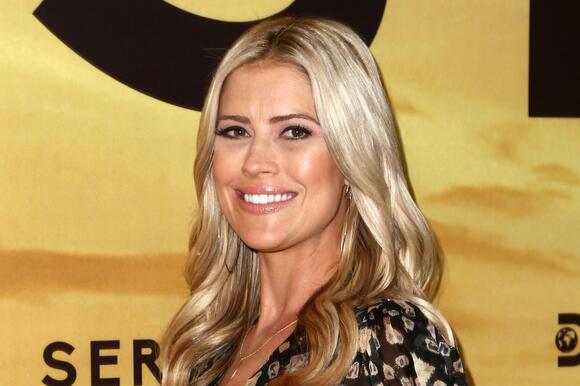 HGTV star Christina Haack is opening up about moving forward after her second divorce.

Haack filed for divorce from "Wheeler Dealers" host Ant Anstead in November after announcing their separation on Instagram two months prior. They share 1-year-old son Hudson.

In an interview with Entertainment Tonight published Thursday, Haack discussed how her life after the split has been focused on family and work, some of which is seen in the third season of the docuseries "Christina on the Coast," which premiered Thursday on HGTV.

"I feel like right now it's just, there's so much going on with work and the kids, so (I'm) focusing on the kids and work and just having fun," Haack said. "My goal is just to move on and not take things so seriously."

The 37-year-old, who was previously married to her "Flip or Flop" co-host Tarek El Moussa, said she is trying to focus on positivity and taking more "quiet" and "private" times for herself and her kids. She is also mom to Taylor, 10, and Brayden, 5, whom she shares with her ex-husband.

After announcing the TV couple's split on Instagram, Haack shared a struggle with anxiety over her fame and how it has affected her relationships.

More: ‘I never gave up on us’: Ant Anstead speaks out on breakup with wife Christina

The real estate investor also talked about what viewers can expect in season 3, including more about her wellness journey.

"You'll see me going to my holistic doctor, just to make sure I'm taking my supplements and we're checking in to make sure that I'm staying healthy. It's very important" she said.

Last year, Anstead also opened about his journey after divorce.

"It really hit me hard. The impact on me, my sleep, my diet, my stress, it showed,” he told People in a December interview. “But I reached this turning point where I was either going to dwell in the darkness or I was just going to slap myself around the face a few times and say, ‘wake up; you’re incredibly blessed. Focus on all the great things.' "

Ever since learning about his ex-wife’s new beau, fans have wanted to know how Tarek El Moussa responded to Christina Haack and Joshua Hall’s relationship. As it turns out, El Moussa has already met Haack’s new boyfriend—and he has some thoughts. The Flip or Flop star was asked about his...

Going public! Christina Haack and new man Joshua Hall are Instagram official just days after news broke of their romance. “The most whimsical/romantic dinner,” Haack, 37, wrote via her Instagram Story on Thursday, July 8, alongside a photo of the couple drinking wine and sitting side by side the evening prior.

Who Is Christina Haack’s New Man Joshua Hall? 6 Things to Know About the Realtor

Leaning into love. Christina Haack and Joshua Hall put their romance on display just weeks after her ex-husband Ant Anstead began seeing Renée Zellweger. Us Weekly confirmed on Wednesday, July 7, that the Christina on the Coast star, 37, had a new man in her life after the couple was spotted holding hands at LAX Airport in Los Angeles.

New man. Christina Haack’s boyfriend, Joshua Hall, is her first public relationship since her divorces from ex-husbands, Ant Anstead and Tarek El Moussa. News broke of Haack’s new relationship in July 2021 when the Flip or Flop star was photographed with Hall at LAX Airport ahead of her 38th birthday. A source told Us Weekly at the time that the two “have been dating for a few months.” The photos came less than a month after reports that Haack’s ex-husband Ant Anstead was dating Renée Zellweger, whom he met on the set of his Discovery+ show Celebrity IOU Joyride.

The perfect getaway! Christina Haack rang in her birthday with her boyfriend, Joshua Hall, on a romantic escape shortly after taking their relationship public. “Thank you to my man for kicking off my 38th with a whimsical dream vacation ❤️. 🔒 🗝,” the Christina on the Coast star captioned an Instagram slideshow on Sunday, July 11, sharing her favorite moments from the trip with her followers. Comments were disabled on the post.

He had her at hollow screws. Renée Zellweger and Ant Anstead can’t contain their new found affection for one another, exchanging hugs and kisses Thursday while making a run to the hardware store. The 52-year-old Oscar winner and the 42-year-old television host were seen embracing as they entered a Home...

Christina Haack might have had a "hard week," but her daughter's support after a reported nasty feud with Tarek El Moussa is putting her in better spirits. The 38-year-old blonde bombshell seemingly acknowledged the rumors about her ex-husband's alleged verbal tirade -- in which he called her a "washed-up loser" in front of their Flip or Flop film crew.

Flip or Flop’s Christina Haack made headlines last fall for divorcing her husband Ant Anstead. Now, he’s moved on with Renée Zellweger, and one tabloid is saying there’s something worrying about the relationship. Gossip Cop investigates. Christina Haack Warning Her Ex’s New Partner?. According to Star, Haack thinks her ex’s...

Christina Haack and ex husband Ant Anstead are now divvying up their joint assets, a month after finalizing their divorce. The couple, who wed in 2018 and split less than two-years later, has agreed to let HGTV diva Haack, 38, keep four California properties and one Tennessee spot while Wheeler Dealers host Anstead, 42, will hold on to seven vehicles, according to TMZ.

Tarek El Moussa reportedly lashed out at his ex-wife Christina Haack recently while they were filming “Flip or Flop,” but a source says he regrets it. An insider tells People, "They did get into a disagreement. Tarek lashed out and he's super remorseful. They're exes who share a history and children and a workplace, but outside of coparenting, they're not friends."

Renée Zellweger and Ant Anstead appear to be going strong in these new photos. It looks like Renée Zellweger and Ant Anstead have taken their relationship to the next level. The Academy Award winner, 52, was photographed moving a sizable bag of personal belongings into the home of her TV presenter boyfriend, 42, in Laguna Beach on Wednesday, July 14. Renée opted for a casual look with a baseball cap, leggings, and sneakers.

Christina Haack received a thoughtful surprise from her eldest child after an admittedly "rough week." PEOPLE reported Wednesday that Haack's ex-husband and Flip or Flop costar Tarek El Moussa went on a verbal tirade against her on the set of their HGTV show. Haack, 38, and El Moussa, 39, tied...

Reports from the set of the HGTV show indicate that Tarek El Moussa was not particularly jazzed when Christina Haack reportedly decided to let the crew know she was ready to start filming a recent scene. A verbal tirade came next, with TMZ even reporting that El Moussa made comparisons between Haack and his new fiancee, Selling Sunset star Heather Rae Young. El Moussa has been engaged to Young since July of 2020.

TAREK El Moussa jetted off to St Barts with his fiancee Heather Rae Young after reportedly blowing up at his ex Christina Haack. The Flip Or Flop star allegedly branded Christina a "washed-up loser" who was a "poorer, less hot" version of Heather in a rant on the set of their show.

Renee Zellweger and Ant Anstead spotted kissing on the beach

Renee Zellweger and Ant Anstead were spotted making out on a beach near his home in Orange County over the weekend. The Oscar-winning actress and the "Master Mechanic" star were snapped near the shoreline of his Orange County home near Laguna Beach as they went for a stroll with his son, Hudson. Zellwegger stayed dry while Ant took a brief swim in the water with his kid before coming back to shore and laying one on the "Judy" actress, seemingly confirming rumors that they’ve started dating.

Christina Haack showed the world that she is "the boss" on the "Flip or Flop" set after her dispute with ex Tarek El Moussa. Haack seemed to be throwing some shade at her ex-husband after news of their heated disagreement on set made the headlines. She took to her Instagram Story and shared a clip showing how smoothly the filming process was going for her without El Moussa, People reported.

If there’s one thing Summer 2021 is going to be remembered for in Hollywood is the lightning speed of relationships. With Bennifer 2.0 on fast forward, it looks like Renée Zellweger and Ant Anstead are taking a move from Jennifer Lopez and Ben Affleck’s playbook. But where JLo and Affleck have a long history together, this duo is still getting to know each other.

How Is Christina Haack's New Boyfriend Connected To Her Ex Tarek?

Christina Haack can't stop raving about her new boyfriend, Joshua Hall. "I met Josh when I wasn't in a state of fear or fight-or-flight," she wrote in an Instagram post on July 8. "When we met this past spring, the synchronicities hit us so hard and fast they were impossible to ignore," she continued. "I felt immediately crazy protective over him and wanted to keep him for myself and get to know each other before the tornado (media attention) hit," adding that they'd already spent "a few solid months of just us getting to know each other."

Christina Haack Touches on 'Things Not Working Out' in Personal Post

Christina Haack is keeping it real and letting her feelings be heard. The Flip or Flop star took to Instagram on Wednesday to write about how people shouldn't be shamed for "things not working out." "Ride or Die. Some people are lucky enough to get forever the first time but...