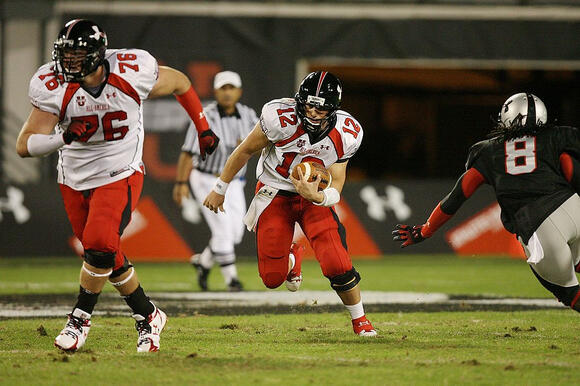 (This story has been updated with new developments. See the original story after the update)

(CANTON, Ohio) Canton McKinley Senior High School's football program might be revered as a solid team, but the coaching staff leaves a bit to be desired, with seven team leaders losing their positions on Thursday after the school board voted not to renew their contracts following a hazing incident.

Per the Canton Repository, Canton City Schools Athletic Director Antonio Hall will be stepping up to fill the position left by former Head Coach Marcus Wattley and six assistants. The allegations stem from a May 24 incident in which the coaches were accused of forcing a 17-year-old student, who was Jewish, to eat an entire pepperoni pizza in front of his teammates as punishment for missing practice.

According to Chabad.org, some Jews opt to not eat pork because some religious texts stipulate that they should not consume meat from animals that have split hooves or engage in cud-chewing, which includes pigs, the chief ingredient in pepperoni.

Ed Gilbert, an attorney for the unidentified victim, told the Washington Post that the 6-foot-5, 280-pound player had sustained a shoulder injury on May 19 and then chose to skip a voluntary practice the following day. When he showed up to the next practice, the ousted coaches told him to sit in a chair and finish off an entire pepperoni pizza they had ordered. If he refused, they told the student his teammates would have to run additional drills.

He proceeded to tell the coaches of his faith at least 10 times, but they still made him do it.

"I felt disrespected," the boy's father, Kenny Walker, said at a June 1 news conference, adding that his family has not consumed pork since 2013.

The Repository reported that Wattley's attorney, Peter Pattakos, said at the Thursday school board meeting that parts of the story were hyperbolized while others were false.

Backed by five football players, Pattakos told the board that the coaches had offered the student chicken nuggets after he said he didn't eat pork. He didn't say any names but stated that another member of the coaching staff had exaggerated a retelling of the incident, leading the district to complete a "rushed and incomplete" investigation.

We asked the district to postpone their decision for at least one more week to allow for this matter to be fully and fairly investigated, including upon full consideration of the testimony of the numerous Canton McKinley football players who witnessed this event and were at tonight's board meeting wanting to tell anyone who would listen that the story being advanced by the alleged victim's father and attorney is not true. For inexplicable reasons, the board denied this basic request and refused to listen to these young men, reflecting that the district's leadership is not interested in the truth of this matter, and is instead motivated by something else.

CCS Superintendent Jeff Talbert later dismissed Pattakos' comments about the investigation after the group voted unanimously to oust Wattley after only two seasons in his position. His disciplinary skills may have been called to question, but his coaching prowess was not: the Canton Bulldogs went 9-3 in 2019 and 6-3 during the shorter season in 2020.

Now Hall, a member of both the Stark County High School and Canton McKinley hall of for his performance at the 1997 and 1998 state championships, will be tasked with performing his duties as the district's athletic director while also leading the high school football team.

"We are confident that under Coach Hall's leadership, our football program will be in very capable and experienced hands and our student-athletes will have a rewarding experience," said board president John Rinaldi.

Canton City Schools will be hosting a press conference Thursday night to address a recent incident that left eight of the district's football coaches with suspensions after they were accused of forcing a Jewish student-athlete to eat pork.

Per 19 News, the meeting will begin at 5:30 p.m. and can be viewed both in-person at the Commons at McKinley High School's Downtown Campus at 521 Tuscarawas St. W in Canton or virtually on this page.

All eight coaching staff members, including Head Coach Marcus Wattley and seven assistants, are currently on administrative leave after forcing a player to eat an entire pepperoni pizza in front of his teammates. Per Chabad.org, some Jews do not consume pork because certain texts direct them to only consume animals that have split hooves and chew cud.

The station reported that the act was intended as a form of punishment against the student for missing a weight lifting session.

The district turned its own investigation over to the Canton Police Department, which is currently looking at the incident as a possible hazing against the student, whose name has yet to be released.

“Our results will be turned over to the Canton City Prosecutor’s Office for a determination on any charges,” Canton Police Chief Jack Angelo said in a statement shared with local publications.

CCS Superintendent Jeff Talbert said the following in a post made to the schools' Facebook page on Wednesday:

The investigation found that the identified coaches engaged in actions that constituted inappropriate, demeaning, and divisive behavior in a misguided attempt to instill discipline in the student-athletes. This behavior will not be tolerated and further disciplinary measures for staff, which have not yet been determined, will follow. The District will continue to follow Board Policies and protocols regarding personnel issues. Once disciplinary measures are determined, in accordance with our commitment to transparency, we will release additional information.

One commenter responded to the Facebook post that the district had handled the situation well, but others were more critical, including a former Canton student-athlete and coach named Michael Davy.

"At the very least, this is bullying and hazing," he wrote. "Discipline is one thing, punishment is another. If there needs to be punishment then the athlete should go home. His punishment is separation from a successful program. A coach should not punish."

It would be really nice if the media would stop lying about the boy being Jewish. The boy and his family belong to a sect called "Hebrew Israelites" that maintains blacks are the true Hebrew Nation. He was offered other food items like chicken fingers rather than the pizza. The article doesn't even bother to mention that the new interim head coach used this incident to advance his career by helping push a misleading narrative of the events. The other members of the football team are upset because of the lies being endorsed by the school board and most media sources.

Senate Majority Leader Charles Schumer (D-N.Y.) on Tuesday night teed up a key vote on a deal struck with Senate Minority Leader Mitch McConnell (R-Ky.) to raise the debt ceiling with only Democratic votes. Schumer, before wrapping up the Senate for the night, moved to tee up a vote expected...
CONGRESS & COURTS・12 HOURS AGO
The Associated Press

Pfizer said Wednesday that a booster dose of its COVID-19 vaccine may offer important protection against the new omicron variant even though the initial two doses appear significantly less effective. Pfizer and its partner BioNTech said that while two doses may not be protective enough to prevent infection, lab tests...
MEDICAL & BIOTECH・3 HOURS AGO
The Associated Press

CHICAGO (AP) — Closing arguments are scheduled for Wednesday morning in the case against former “Empire” actor Jussie Smollett, who is accused of staging a racist, anti-gay attack against himself in downtown Chicago to get publicity. The jury is then expected to begin deliberating whether Smollett is...
CHICAGO, IL・11 HOURS AGO
ABC News

President Joe Biden is expected to warn Russia's President Vladimir Putin there would be consequences for invading Ukraine, a senior administration official said.
POTUS・5 HOURS AGO

The compromise bill dropped proposals that would have required women to register for the draft.
CONGRESS & COURTS・10 HOURS AGO
ABC News

(CNN) — The House select committee investigating the January 6 riot informed Mark Meadows that they have "no choice" but to advance criminal contempt proceedings against him given that former President Donald Trump's former chief of staff has decided to no longer cooperate with the panel, according to a new letter.
CONGRESS & COURTS・51 MINUTES AGO
CNN

Accuser testifies Ghislaine Maxwell told her she 'had a great body for Epstein and his friends.' She was 14.

(CNN) — Carolyn said she was just 14 years old when she began to go to Jeffrey Epstein's home in Palm Beach, Florida, two or three times per week in the early 2000s. On one visit, Carolyn was setting up a massage room for Epstein when his longtime companion Ghislaine Maxwell came into the room. Maxwell touched Carolyn's breasts, hips and butt, and commented that she "had a great body for Epstein and his friends," according to Carolyn.
PUBLIC SAFETY・17 HOURS AGO