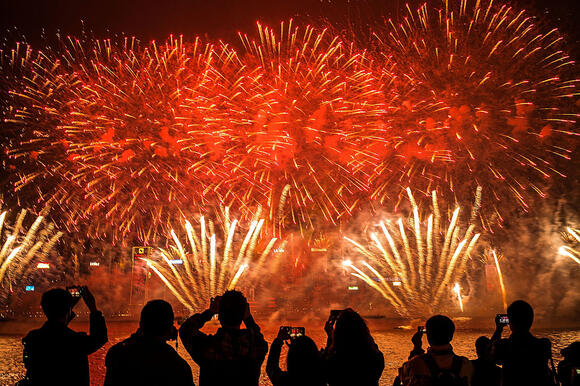 (COLUMBUS, Ohio) There may be a lot more sparks in the air in Ohio this Fourth of July after the state's Senate voted to pass Senate Bill 113, which would loosen Ohio's restrictions on fireworks during certain recognized holidays, on Wednesday.

"Patriotic Americans have been, albeit illegally, shooting off fireworks in this state for as long as I can remember, without the safety measures included in this legislation," Sen. Michael Rulli, R-Salem, said in a press release. "With proper parameters and safety precautions, Ohioans will soon be able to celebrate our holidays safely, while enjoying this time-honored tradition."

Now, those patriots will be able to shoot off their own consumer-grade fireworks, so long as it's one of the following holidays:

The bill's text defines "fireworks" as "any composition or device prepared for the purpose of producing a visible or an audible effect by combustion, deflagration, or detonation."

Previously, people caught discharging fireworks in Ohio for a first offense would be hit with a first-degree misdemeanor carrying up to $1,000 in fines and six months of jail time, according to the Ohio Department of Commerce. Those penalties could still be incurred if Ohioans were to launch the colorful explosives on days not listed above, but that's only if the bill passes.

Additionally, according to 19 News, the bill would also allow local community officials to set certain days when fireworks would be banned.

Per WKBN, Rulli said he hopes the bill will reach Gov. Mike DeWine's office by July 3 in time for the national holiday, but it first must pass through the Ohio House for review.

The bill's other sponsor, Sen. Terry Johnson (R-McDermott), told 3 News the following after the bill passed:

I was delighted today with the bipartisan vote that Senate Bill 113 received in the Ohio Senate. For too long Ohioans have been saddled with a consumer-grade fireworks law that was largely ignored and was all but unenforceable. My bill, if enacted into law, will once again allow Ohio citizens to legally celebrate a number of major holidays—and most especially our American Independence Day—by setting off fireworks.

Despite the fact that fireworks are currently illegal to discharge in Ohio, the state is home to dozens of stores where residents can purchase the tubes of gunpowder to bring to territories where they are legal.

(CNN) — The parents of the suspect in a shooting at Oxford High School in Michigan that left four students dead this week are facing involuntary manslaughter charges in those deaths. Legal experts were quick to point out that such charges are far from the norm -- it is James...
MICHIGAN STATE・6 HOURS AGO
The Hill

President Biden signed a short-term funding bill on Friday, averting a government shutdown hours before the deadline. A group of conservatives in the House and Senate had threatened the fate of the legislation over opposition to Biden’s coronavirus vaccine mandate before finally allowing the legislation to pass. The bill funds...
CONGRESS & COURTS・9 HOURS AGO
The Associated Press

WASHINGTON (AP) — President Joe Biden has pledged to make it “very, very difficult” for Russia’s Vladimir Putin to take military action in Ukraine as U.S. intelligence officials determined that Russian planning is underway for a possible military offensive that could begin as soon as early 2022. The new intelligence...
MILITARY・25 MINUTES AGO
ABC News

The plan does not include more aggressive measures like requiring testing for domestic flights or mandating testing for passengers after their arrival in the U.S.
BETHESDA, MD・1 DAY AGO

A blizzard warning has been issued for Hawaii, with at least 12 inches of snow forecast this weekend.
HAWAII STATE・3 HOURS AGO
ABC News

An appeals court peppered DOJ attorneys Friday with questions over whether it's appropriate for the DOJ to defend Donald Trump against E. Jean Carroll's defamation suit.
POTUS・8 HOURS AGO
CBS News

South African health officials said Friday they are investigating a recent surge in cases among younger age groups not seen in previous waves of the virus, as the country battles an "unprecedented" surge of COVID-19 cases it believes is fueled by the Omicron variant. Officials in South Africa are not...
KIDS・6 HOURS AGO
CBS News

The man accused of opening fire at a King Soopers grocery store in Colorado last March and killing 10 people has been deemed mentally incompetent to stand trial for the time being, the Boulder County district attorney's office told CBS News on Friday. Ahmad Al Aliwi Alissa is facing 10 counts of first-degree murder and more than 20 counts of attempted murder, among other charges.
COLORADO STATE・5 HOURS AGO

THE HAGUE, Netherlands (AP) — South African scientists are warning that reinfections among people who’ve already battled COVID-19 appear to be more likely with the new omicron variant than with earlier coronavirus mutants. A research group has been tracking reinfections in South Africa and reported a jump with the arrival...
PUBLIC HEALTH・14 HOURS AGO
The Hill

The November jobs report gave a muddled picture of an improving economy. Overall job growth fell far short of expectations, with the U.S. adding just 210,000 of the roughly 500,000 jobs that analysts projected the economy to gain last month. Even so, the unemployment rate sunk from 4.6 percent to 4.2 percent, landing less than 1 percentage point above the pre-pandemic jobless rate.
BUSINESS・7 HOURS AGO