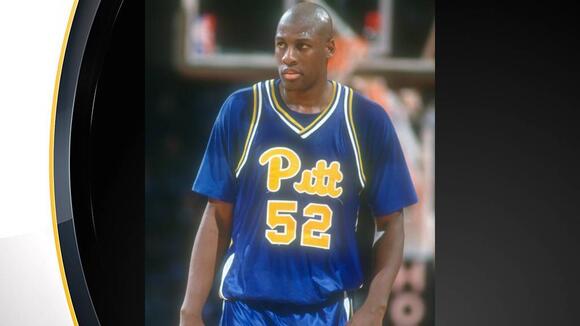 The Pitt men’s basketball team confirmed the news on Wednesday in a tweet. Mobley played three seasons at Pitt, appearing in 50 games from 1991 to 1994.

He was drafted by the Milwaukee Bucks in the first round of the 1994 NBA Draft. He played three seasons in the NBA.

Mobley’s cause of death has not yet been released.

PITTSBURGH (KDKA) - On Saturday, Yinzers got rid of their old baseball equipment for a good cause. The Pirates held an equipment drive at PNC Park yesterday morning. Some members of the team were on hand helping collect used bats, gloves, and more. All of the equipment they gathered was to send to youth baseball leagues in the Dominican Republic and Venezuela. It was the second year the team held the collection and Pirates have said they'll continue it next year. "Some areas of the Dominican Republic can be depressed so getting kids some nice equipment that otherwise would sit in someone's garage is huge," said John Leonard, the Pirates Manager of Youth Baseball and Softball. "Their eyes get so big, it's amazing to see someone so happy about a piece of equipment that's not being used here." Those who donated were rewarded with two free ticket vouchers to a game this upcoming season.
PITTSBURGH, PA・1 DAY AGO
CBS Pittsburgh

PITTSBURGH (KDKA) — The Memphis police beating of Tyre Nichols has caused anger across the country, including right here in Pittsburgh.Community groups and leaders said police violence like this is why community-police relations can be fractured.  "That is un-American that we have to feel that way as Black people, just because we're Black or Brown or whatever. That's wrong, but it's real," Black Political Empowerment Project President Tim Stevens said.  Stevens sent a letter asking for Pittsburgh police to address de-escalation, remind officers they are to protect and serve — not abuse — and stop traffic stops for certain minor...
PITTSBURGH, PA・10 HOURS AGO
CBS Pittsburgh

PITTSBURGH (KDKA) -- Harassment charges that had been filed against Tony Moreno, the former Republican candidate for Pittsburgh mayor have been thrown out. Moreno had been accused of pointing a shotgun at a man in his Brighton Heights neighborhood.He denied the accusations and on Monday, a judge dismissed the charges.Moreno's lawyer told the Tribune-Review it was a neighborly dispute.
PITTSBURGH, PA・3 HOURS AGO
CBS Pittsburgh

PENN HILLS, Pa. (KDKA) — She starred for eight seasons in the hit Lifetime show "Dance Moms," bringing young dancers to fame and tears. But Abby Lee Miller says she wants to auction off everything inside her famed Penn Hills studio after recently selling the building."I think 'Dance Moms,' the intro of the show showing the sights of Pittsburgh week after week in all those different countries, definitely showed a nice, beautiful part of Pittsburgh to the world," said Miller.KDKA's Meghan Schiller took a tour of the studio and the memorabilia up for auction, including the bench gifted to Miller from...
PITTSBURGH, PA・3 DAYS AGO
CBS Pittsburgh

Pittsburgh Weather: Monday drizzle ahead of cooldown later this week

PITTSBURGH (KDKA) -- Light pockets of drizzle are expected to stick around through the morning hours today. Daily average High: 37  Low: 21Sunrise: 7:32 Sunset: 5:36WEATHER LINKS:Current Conditions | School Closings & Delays | Submit Your Weather PhotosToday: Drizzle for the morning hours with low visibilities.  Temperatures hovering around 32° means I can't rule out a slick spot or two. Light rain chance for the afternoon as a cool front passes throughAny Alert Days Ahead? Nope.Aware: A big temperature dip will arrive late this work week with Friday highs only around 21 degrees. Drizzle should give way to a better chance for rain this afternoon after 3 p.m....
PITTSBURGH, PA・22 HOURS AGO
CBS Pittsburgh

ELLWOOD CITY, Pa. (KDKA) — One person was killed and another was injured after a shooting in Lawrence County, sources say.Sources tell KDKA-TV that the deadly shooting happened Monday just after 5 p.m. on 1st Street in Ellwood City. Sources say a mother and daughter are the victims. The mother died at the scene while her daughter was taken to a hospital in Ohio in critical condition, sources say.Sources say the gunman, who is allegedly the daughter's boyfriend, shot both victims in the head inside a third-floor apartment. A man inside a nearby bar who did not want to be identified saw police take the man into custody. "I saw the suspect backing down the street and then there were four or five cops, he went down on the ground," he said. "They handcuffed him and put him in the car. No shoes, socks, no t-shirt."No charges have been filed at this time. The Lawrence County district attorney says he will release more information on Tuesday. The mayor said this is the first homicide of 2023. Stay with KDKA-TV and KDKA.com for updates to this developing story as they become available.
ELLWOOD CITY, PA・9 HOURS AGO
CBS Pittsburgh

PITTSBURGH (KDKA) — The police body camera video from the violent arrest of Tyre Nichols is expected to be released Friday night.His death led to second-degree murder charges against five Memphis police officers who were fired over the incident.Investigators and prosecutors are giving the public advanced warning that what they are about to see will be shocking in its brutality — a restrained Nichols repeatedly being hit with a Taser and beaten only to die in a hospital three days later. When the video is released, street protests could follow. "When people actually see with their own eyes the kinds of...
PITTSBURGH, PA・3 DAYS AGO
CBS Pittsburgh

Tyre Nichols death: Eric Garner's mother asks 'When is it going to stop?'

PITTSBURGH (KDKA) — As Memphis officials released police video from the violent arrest of Tyre Nichols, the mother of Eric Garner was speaking in Pittsburgh at the closing of an exhibit at the August Wilson Cultural Center. Garner died after being placed in a chokehold by a New York City police officer in 2014. Nichols died days after what his family and authorities described as a brutal encounter that stemmed from a traffic stop.A moment doesn't go by when Gwen Carr doesn't think about her son. This July will mark nine years since Garner's death when he cried, "I can't breathe"...
MEMPHIS, NY・3 DAYS AGO
CBS Pittsburgh

PITTSBURGH (KDKA) - As protests against police brutality take place nationwide after Tyre Nichols' death, people are rallying in Pittsburgh as well.A small group gathered on the North Side and then walked to Pittsburgh police headquarters on Monday morning. About 20 people marched down Brighton Road and stopped in front of the Zone 1 station, demanding justice for Nichols and change.The Black Liberation Autonomous Collective, Pittsburgh Feminists for Intersectionality and Black Anarchist Community Council say they're tired of Black people dying at the hands of police after Nichols was brutally beaten by Memphis police officers and died three days later.These protestors...
PITTSBURGH, PA・12 HOURS AGO
CBS Pittsburgh

PITTSBURGH (KDKA) -- Tequila Cowboy is already bustling, but now they're going to be expanding on Pittsburgh's North Shore.The Post-Gazette reports that the restaurant owner signed a lease for the space of the now-closed Bettis Grille.The space is right across the street from Tequila Cowboy.The owner told the Post-Gazette it's planning a restaurant and sports bar themed after a national entertainer.
PITTSBURGH, PA・3 HOURS AGO
CBS Pittsburgh

PITTSBURGH (KDKA) - We are off to another mild start with lows in the upper 30s and a few rain showers. Areas north of I-80 and the ridges will see a light mix of rain and snow but little accumulation is expected. We dry out through the afternoon on Sunday with highs staying in the mid-40s. WEATHER LINKS: Current Conditions | School Closings & Delays | Submit Your Weather PhotosMonday mornings commute there's a few rain and snow showers expected. Areas north have a better chance at a coating while areas in Pittsburgh and south will see a light mix or just all rain showers. There will be a few snow showers through tomorrow afternoon and early evening and temperatures will drop through the day. They will also be brief but keep in mind there may be slick spots on any untreated surfacesNext week will be chilly again with highs only near 30, but overnight lows could dip back into the teens. The start of February will be drier.Stay up to date with the KDKA Mobile App – which you can download here!
PITTSBURGH, PA・1 DAY AGO
CBS Pittsburgh

PITTSBURGH (KDKA) -- A train caught on fire on Sunday morning in Westmoreland County.Photos from the Lloydsville Fire Department showed the damage left after the engine caught fire.The train conductor was able to keep the flames from spreading until fire crews arrived.Norfolk Southern is now investigating.
UNITY TOWNSHIP, PA・1 DAY AGO
CBS Pittsburgh

PITTSBURGH (KDKA) - Two people are recovering after their deck collapsed Saturday morning in Vandergrift.A couple was on the deck when half of it collapsed, according to the Tribune-Review.Relatives told the Trib the fall was about 10 feet, and the couple broke some of their bones.
VANDERGRIFT, PA・1 DAY AGO
CBS Pittsburgh

BRGR permanently closes its last Pittsburgh-area location at the Galleria in Mt. Lebanon

PITTSBURGH (KDKA) -- It's the end of an era for a local burger joint.BRGR just closed its last restaurant in the Pittsburgh area.According to the Pittsburgh Business Times, the BRGR location at the Galleria in Mt. Lebanon is now permanently closed.Before the closures, they had a location in Downtown Pittsburgh, East Liberty, Cranberry Township, and at PNC Park.According to BRGR's website, the only location remaining that's still open is in State College.
PITTSBURGH, PA・2 HOURS AGO
CBS Pittsburgh

PITTSBURGH (KDKA) - A Pittsburgh man is facing 35 separate charges stemming from a police chase and crash earlier this month.Police said David Long drove away from officers after they tried to pull him over for reckless driving on Frankstown Avenue. According to the criminal complaint, Long crashed head-on into another car then ran away. Two people in the other car were injured.  Police said they found three large bags of marijuana, drug paraphernalia and $370 of cash in Long's car.  He's facing a list of charges including aggravated assault, assault by vehicle, reckless endangerment and fleeing police.
PITTSBURGH, PA・3 DAYS AGO
CBS Pittsburgh

PITTSBURGH (KDKA) -- One of two men accused in the shooting death of a Butler County native in 2020 took the stand over the weekend and defended himself during the murder trial.Devaunte Hill and James Cowan are charged with first-degree murder for shooting and killing Caitlyn Kaufman in Nashville.Testimonies continued as the trial prepares to head into its seventh day. Several witnesses, detectives, and the alleged gunman took the stand as prosecutors and the defense work to piece together exactly what happened on December 3, 2020.It was then that police say Butler native and 26-year-old Caitlyn Kaufman was on her way...
NASHVILLE, TN・1 DAY AGO
CBS Pittsburgh

PITTSBURGH (KDKA) -- East End Brewing is inching closer to opening its brand new location in the South Hills!Founder Scott Smith says the new taproom in Mt. Lebanon's business district along Route 19 will be opening in March.While it won't be a full brewery, the taproom will serve beer, hard seltzers, and ciders, among other types of drinks.An official opening date has yet to be announced.
MOUNT LEBANON, PA・2 HOURS AGO
CBS Pittsburgh

PITTSBURGH (KDKA) - If you're still looking for Valentine's Day plans, you can enjoy a night of dinner and dancing for a great cause on the North Side. The Joe Beretta Foundation will hold its annual "Hopeful Hearts Valentine's Gala" next month. RELATED: KD Sunday Spotlight: Joe Beretta Foundation helps care for the caretakersThe foundation provides emergency housing, emotional support, and financial assistance to patients with advanced heart failure and their families. There will be a silent auction as well as live music. The event will be at the Priory Grand Hall on February 11 at 6 p.m. in the evening. You can get tickets here.
PITTSBURGH, PA・2 DAYS AGO