By Christopher Hall
Posted by
MountaineerMaven
2021-06-02 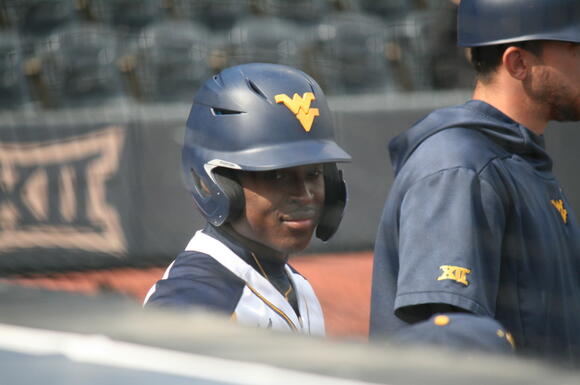 West Virginia right fielder Austin Davis made one of the top plays of the week during championship week, according to NCAA Baseball, coming in at No. 2.

In the elimination game versus the top-seed Texas Longhorns and in the bottom of the fourth with two outs, the bases loaded and the Mountaineers trailing 1-0, Mike Antico drove a high fly ball to deep right field, but Davis climbed the wall and robbed Antico of the grand slam.

Davis has made Sportscenter's Top 10 Plays of the Day among others this season but unfortunately did not grab the top spot. Davis responded on Twitter with, "At this point, I have to catch a ball with no glove for #1."

Jokes aside, the top spot went to Dallas Baptist first baseman Cole more, who dove over the fence in foul territory to make the grab.

There are a plethora of talented quarterbacks in the SEC this year, but there’s one in particular who ESPN analyst Paul Finebaum really likes for the 2021 season. Believe it or not, that quarterback is JT Daniels from Georgia. Daniels didn’t start every game for the Bulldogs last season, but...

One of the very first members of Auburn’s recruiting class of 2022 has decided to re-open his recruitment. Jarell Stinson, a three-star cornerback from Opelika, announced his decision through Twitter on Wednesday afternoon. After thanking coach Bryan Harsin and the Auburn staff, he wrote “After many talks with my family, coaches, and friends I have decided that decommitting from Auburn University and re-opening my recruitment is best for my future.”

Barry Switzer Says 1 School Is Hurt Most By Oklahoma, Texas

Oklahoma and Texas’ move to the SEC has sparked plenty of debate about what this addition means for the conference’s existing 14 teams. Barry Switzer, who has deep connections with both the SEC and the Big 12, believes this move will benefit the Arkansas Razorbacks. Switzer served as a player/assistant...

NBA Draft day is finally here — and the draft-day trades are already starting to roll in. With the first draft-day trade of 2021, the New Orleans Pelicans have sent the No. 53 overall pick to the Philadelphia 76ers in exchange for $2 million in cash considerations, per NBA insider Shams Charania.

Jalen Green puts out an important statement ahead of the 2021 NBA Draft that might leave Cade Cunningham, as well as Detroit Pistons, fans confused. A day before they officially enter the NBA, the-19-year old declares that his goal is to land at number one, no matter how a lot of people are already taking Cunningham as the Pistons’ first overall pick.

On Wednesday, Green Bay Packers quarterback Aaron Rodgers shed light on his issues with the franchise in an unfiltered press conference. Los Angeles Lakers superstar LeBron James responded to Rodgers’ viral words with a major stamp of approval. The relationship between Rodgers and the Packers has been rocky for some...

There are only nine days until the draft, believe it or not. And with the NBA fully locked in on offseason preparation, and informed speculation becoming more factual by the day, it’s a good time to take a closer look at how draft night is shaping up. While the projected No. 1 pick—Cade Cunningham—remains the same, a lot has changed over the past month as players crisscrossed the country for workouts after the combine.

Our verdict is in. After looking at all the possibilities, Tennessee football should oppose the Texas Longhorns and Oklahoma Sooners in their quest to join the SEC. It’s a tough call on whether or not this would be good for the Vols, but what we know about the bad outweighs the good.

The Detroit Pistons did exactly what everyone expected on Thursday when they selected Cade Cunningham as the first overall pick of the 2021 NBA Draft. Despite there being no surprises with their top selection, the Pistons have been quite active on draft day. As a matter of fact, they are reportedly on the brink of pulling off a trade with the Charlotte Hornets involving a couple of second-round picks.

Clemson coach Dabo Swinney met with the media as part of South Carolina Coaches for Charity event Tuesday evening and he was asked a plethora of questions. One of the most intriguing answers given by Dabo Swinney, though, had to do with his thoughts on conference realignment. Swinney said he...

Where would the 'Palace on the Prairie' and Darrell K. Royal rank among SEC Stadium Capacities?

Part of the allure of college football is the environment in which it’s played. A college football team’s stadium can bring as much to the sport as what happens on the field does. You can’t think of Oklahoma Sooners football without hearing the great Toby Rowland’s voice booming the “Palace on the Prairie” in a pre-game hype video.

Baseball has long been considered America's pastime, though it has also been dominated by male players from the beginning. Slowly, Major League Baseball has opened its doors to women — while not on the field itself, in positions such as coaches, general managers and analysts. As the push continues to...

NCAA’s Emmert: It is time to decentralize

NCAA President Mark Emmert said Thursday the time is right to consider a decentralized and deregulated version of college sports, shifting power to conferences and campuses and reconsidering how schools are aligned. Emmert said the recent Supreme Court ruling against the NCAA along with the lifting of restrictions on athletes...

MARTINS FERRY — When selecting a college a lot of things beyond athletics come into play. As it pertains to Martins Ferry senior Chase Goff, Wheeling University checked all of the boxes. After doing his due diligence to the process, Goff has elected to continue his baseball and academic careers...