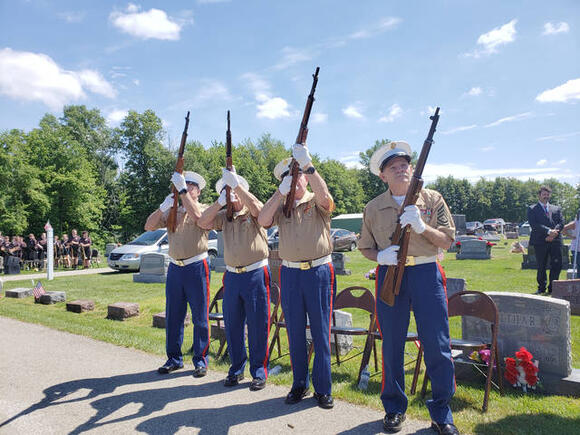 Memorial Day was observed in Mt. Orab at the Green Township Cemetery on May 31, the 73rd year in a row that such a ceremony has been held.

Over one hundred people attended the ceremony, and there was not a mask in sight. The event featured patriotic music provided by the Western Brown Band and by former state representative Doug Green and family.

Veterans in the audience were invited to come to the front to be recognized and share their name and branch of service with the crowd. Speakers included retired USMC Colonel Danny Bubp, retired Major General Gordon Ellis and Army Captain Tom Mayes.

Ellis spoke to the crowd about the burden of command when service members are killed in action.

“When you have served in a combat theater of operation and you have lost military members under your command, you are always reminded on Memorial Day of that place, that village, that map point,” Ellis said.

“You immediately picture them and you remember them. You may think about how you were just with them the day before. And you realize what a price is paid for our ability to be here today.”

Ellis then talked about how those losses stick with you, long after a deployment is over.

“You attend the memorial services and then you treasure their memories and you remember them. Not only from that day, but particularly on Memorial Day, where once again, when you think about them, you are transported back to that place, so far from here, and remember what it felt like when that first radio casualty message came in.”

Ellis then spoke of why military members are willing to volunteer to risk their lives in a combat zone.

“They serve because they love their country and all of you more than they did themselves. They were willing to go and do what was necessary because that was the mark of who they are. And they would be pleased to see all of you gathered here today, gathering and pausing just a moment to remember them.”

Mayes, who recently returned home from a deployment to the middle east, spoke about the joys of coming back to Brown County.

He then complimented his local fellow soldiers.

“Brown County’s tradition of honorable service is second to none. While we were deployed we had at least four soldiers that called Brown County home and those soldiers upheld that tradition to the highest level.”

The ceremony ended with the playing of “Taps” to honor the war dead and a gunfire salute.