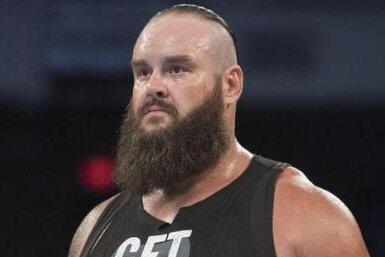 "WWE wishes them the best in all of their future endeavors," the company said in a statement.

Strowman, a former Universal Champion, last appeared on Raw in May where he discussed his excitement for seeing live fans again as WWE gears up to start touring following the COVID-19 pandemic.

Strowman competed at WrestleMania 37 in April against Shane McMahon in a Steel Cage match and competed for the WWE Championship against Bobby Lashley and Drew McIntyre at WrestleMania Backlash in May.

Black made a return to SmackDown recently where he attacked Big E during a Fatal 4-Way match for Apollo Crews' Intercontinental Championship. Black had started to introduce a new Dark Father persona during special segments on SmackDown in recent weeks.

"I'm gathering my thoughts as this was a complete left field for me as obviously we just started the dark father character but this was it, thank you so much WWE universe for allowing me to create and give you small bits of myself," Black said on Twitter.

Lana was featured on Raw Monday as she took on Mandy Rose and Dana Brooke alongside her tag team partner Naomi. Lana and Naomi also competed together at WrestleMania 37.

Lana was the former manager of Rusev, now Miro in AEW. Lana and Miro are married outside the ring.

Murphy was a former protege of Seth Rollins and was involved in a love story with Rey Mysterio's daughter Aalyah throughout 2020.

Riott was the leader of the Riott Squad, which also includes Liv Morgan and former WWE competitor Sarah Logan. The Riott Squad competed at WrestleMania 37 and lost against Natalya and Tamina last week on SmackDown.

Garrett competed on NXT and appeared during the 2021 Women's Royal Rumble match.

Braun Strowman showed up at Bareknuckle FC’s show last night, headlined by Paige VanZant. He wrote, “Fun times at @bareknucklefc with my boy @mental_entity [email protected] so much @ashasebera_danabrooke and @uly_monster for the awesome seats. And nice meeting @bigbabymiller @coronacartel_ to say these fights were entertaining was an understatement!!! #bareknuckle #BigBoyClub #TheSmallestDudeIs245 #ThickBrothers #FightNight.”

Braun Strowman responds to rumors about his possible WWE return

In the last great wave of layoffs carried out by WWE in its main roster, in which important names of athletes such as Aleister Black, Lana or Braun Strowman were cut, the Monster Among Men of the company was the most sensational name that had left astonished WWE Universe fans, with the mammoth former Universal Champion who until a few weeks before was still running in the Monday Night Raw main event, in titled matches and a few weeks later was so easily ousted from the company.

- Per a report from Dave Meltzer in the latest Wrestling Observer Newsletter, WWE is interested in rehiring Braun Strowman. he was part of the cuts on Wednesday, June 2, 2021. Reportedly, there is interest in keeping him away from AEW. - Speaking with Scott Fishman of TV Insider, Carmella...

Braun Strowman is usually pretty active on social media, but a photo that he posted to his Instagram account back in November has been removed. The photo showed Strowman kicking Keith Lee, and the Monster Among Men reacted to the photo being removed when he posted the following:. “@instagram is...

Braun Strowman Says He Has “Choices” To Make

Former WWE Superstar Braun Strowman took to Twitter this afternoon and fueled the rumor mill. There’s been a lot of speculation on Strowman’s future as of late. It’s been reported that AEW has interest in signing Strowman, and that he also has interest in working for the company, but it was then reported this past week that WWE has talked about possibly bringing back The Monster Among Men.

– Former WWE Superstar Braun Strowman shared a clip on his Instagram this week, showcasing the spot where he hit Drew McIntyre with a rather stiff Senton during the WWE Championship Triple Threat Match at WrestleMania Backlash last May. You can check out post and clip Strowman shared below. Strowman...

Former WWE Superstar Braun Strowman was in attendance at Friday night’s Bare Knuckle FC event. The company took to Twitter, showing a photo of the WWE alumnus in the crowd. Strowman was released from WWE back in June and is currently under a 90 day non-compete clause. There are some rumors that WWE is interested in bringing him back but that has not been confirmed as of this writing.

Braun Strowman could be set to be rehired

One of the many released by the WWE of this very hard two-year period, formed by over a year of world pandemic that has literally cut the legs and breath of the Stamford-based company, like those of all the world pro-wrestling companies in the world, responds to the name of Braun Strowman, former WWE world champion, who was truncated from the federation roster overnight.

Braun Strowman was released from WWE, because he had an insane $1.2 million per year contract. Now he’s looking to fill up his schedule with bookings, but the Monster Among Men is charging $20k, plus travel and accommodations for 2 days, and that has turned some promoters away. Adam Scherr...

Former WWE Universal Champion Braun Strowman seemingly apologized to WWE RAW Superstar Drew McIntyre via Instagram on Tuesday. Strowman posted a video clip of him hitting an elbow drop on McIntyre during their Triple Threat match for the WWE Championship at WrestleMania Backlash earlier this year. Bobby Lashley won the match to retain his title.

Braun Strowman has a lot of irons in the fire, and teased that he has some “big moves” coming up. The WWE alumnus posted to his Instagram stories (per Wrestling Inc) and wrote:. “I can’t wait to share what’s going with me!!! Big moves coming!!! #MLMR”. “MLMR” is short for...

One of the most surprising and sensational WWE releases of all this 2021, which has been on the lips of all WWE Universe fans for weeks, is that of the federation's former Universal Champion: Braun Strowman. After a formidable ascending parable, starting from the split of the Wyatt Family, with the mammoth athlete former NXT who had grown out of all proportion, even reaching an impeccable physical shape, Strowman had not managed to reach the plans that matter for the WWE, having to wait until the chance of a lifetime, at Wrestlemania 36, when an outgoing Roman Reigns handed over the Smackdown scepter to him.

Braun Strowman Reportedly Set To Make His Return To Wrestling

Braun Strowman (Adam Scherr) has reportedly been booked for his first event post-WWE release. According to a new report from Lucha Libre Online, Scherr is set to be a part of the QPW SuperSlam 3 show in Qatar. The show is scheduled for February 26, 2022. Scherr is set to travel to Qatar and sign his contract for the show this September, this is after QPW’s President Ali Al-Marafi reportedly headed the charge to get Scherr on the show.

Here is your fight size update for Saturday, July 31, 2021. - Paige took to Twitter and shared an update on how her neck is feeling. - Per Lucha Libre Online, former WWE superstar Braun Strowman has agreed to wrestle at Qatar Pro Wrestling’s SuperSlam 3 show on February 26, 2022. This is his first official booking since his WWE release.

WWE has released some surprising names so far this year, and fans were shocked when former Universal Champion Braun Strowman was released from his contract last month. Since then Strowman has been teasing his next move, and now Lucha Libre Online is reporting that the Monster Among Men has been booked for the QPW SuperSlam 3 event at the Lausail Sports Arena in Doha, Qatar on February 26, 2022.

Aleister Black speaks about his relationship with Vince McMahon

One of the latest purchases made by All Elite Wrestling, as well as one of the last great losses of the WWE, responds to the name of Aleister Black who now performs in the Dynamite rings under the ring name Malakai Black, after having surprised all the fans of the WWE Universe by showing up well before the 90 days of a non-competition clause that the federation usually has with its releases.