Lebron James Is Not at the Top Of the Game: Unchecked 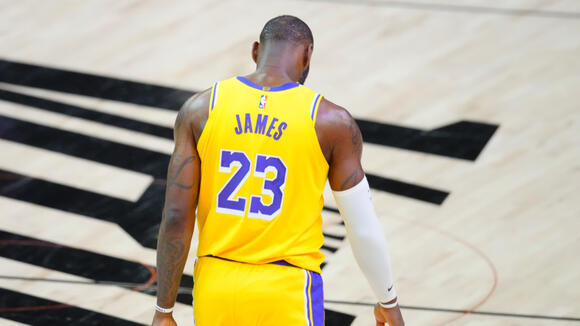 LeBron James left the court early and we are getting an early look at the twilight of his career, as it’s strange to see him not able to take over a game at will and carry his team.

At this moment, whether it be his ankle, age, wear and tear or a combination of it all; he is not the best player in the game. This of course has been exacerbated by a Lakers supporting cast that is simply not as good as many believed, the injury to Anthony Davis, and a lack of shooting on the perimeter that leaves the floor crowded taking away space for James to operate.

But the fact is LeBron is averaging fewer points in a playoff series than he has since the NBA Finals in 2011, the one legitimate black mark on his career. And though he is still able to impact the game with his basketball acumen and passing, his lack of burst on the drive is apparent, making him significantly more offensively limited than we are accustomed to.

I don’t say this to diminish him, he’s already the greatest of all time in my mind and has nothing left to prove. However, given his current performance and what we’re watching from the likes of James Harden, Kevin Durant, Kawhi Leonard, Luka Doncic, Nikola Jokic and Giannis Antetokounmpo this postseason, I simply can no longer confidently proclaim James to be the league’s best.

The simplest explanation for why is injury. He did just win Finals MVP in October and was on his way to likely hoisting the same regular season award before hurting his ankle. However, he is 36 and in year 18 as is frequently pointed out, which isn’t generally when players get better.

I’ll never doubt his ability to respond, both in this series or next season, but the LeBron James we’re seeing right now is not the same. And as a result, the title of the best player in the NBA is finally up for grabs.

Much has been made about the NBA’s compressed schedule this season and how it has been one of the primary reasons behind the multitude of injuries that has mired the playoffs. One of the biggest critics has been LeBron James, but apparently, Phoenix Suns star Chris Paul has a contradicting view to that of his buddy.

LEBRON James caused a scene at his son's basketball game on Saturday, interrupting the game to angrily yell at the PA announcer. The heated scene unfolded during the final minutes of the game at LeBron's alma mater Vincent-St. Mary’s High School, in Ohio, inside the LeBron James Arena. The Los...

Michael Jordan and Shaquille O’Neal are regarded as two of the greatest players to have ever lived and occupied the top-10 all-time list for the majority of fans and pundits. While each player had different playing styles, they were dominant in their respective eras and hold an achievement that isn’t shared with any other player besides them. Jordan and O’Neal are the only two players in NBA history with 3 championships and 3 straight Finals MVPs to their resumes.

Shannon Sharpe makes shocking admission, says LeBron James is no longer the best in the NBA

Shannon Sharpe, a commentator on Fox Sports 1, is known as a huge fan of LeBron James. However, he just admitted that the Los Angeles Lakers superstar is no longer the best player in the world. If Giannis Antetokounmpo is indeed now the best, he has certainly earned it. He...

The dynamic duo of LeBron James and Anthony Davis in Los Angeles is now a big three. With a blockbuster draft-day trade on Thursday, the Lakers sent Kyle Kuzma, Kentavious Caldwell-Pope, Montrezl Harrell, last night’s No. 22 overall pick, a 2024 second round and a 2028 second-round pick to the Washington Wizards in exchange for superstar point guard Russell Westbrook.

Giannis Antetokounmpo’s dominant outing in Game 6 of the NBA Finals has captivated the entire sporting spectrum. Antetokounmpo dropped 50 points, 14 rebounds, five blocks and two assists while making 17-of-19 free-throw attempts in a closeout game to win his first title. The Phoenix Suns simply had no answer for...

The Los Angeles Lakers are still relishing in the fact that they pulled off a blockbuster trade with the Washington Wizards to bring Russell Westbrook to town. On the night of the NBA Draft, they sent a few players to Washington in the exchange, including Montrezl Harrell, Kentavious Caldwell-Pope, and Kyle Kuzma.

The Deadliest Kryptonite For The Los Angeles Lakers: LeBron James Is 8-17 Against Danny Green, Anthony Davis Is 2-25 Against Stephen Curry

The Los Angeles Lakers are expected to come back with a vengeance next season, after falling to the Phoenix Suns in the first round of the playoffs. LeBron James will be 37 years old at some point next season, and Anthony Davis is struggling with injuries. But in terms of pure talent on the roster, the Lakers are still the team to beat in the West when healthy.

Los Angeles Lakers superstar LeBron James has been very invested in helping his son Bronny develop his basketball skills. NBA legend Dwyane Wade recently praised the elder James for his role in the younger James’ growth. In the process, Wade referred to the younger James as a complete player. It...

Dennis Rodman Criticized LeBron James' Style Of Play: "He Doesn’t Have Any Moves. The Only Move He Has Is Straight Down The Line. His Game Is Too Simple."

Dennis Rodman has had some harsh words for LeBron James over the past couple of years. The 5x NBA champion played with great players, whom he believes are better than The King. When he talks about Michael Jordan and Scottie Pippen, Rodman has nothing but great things to say. When...

On Saturday, Cleveland Cavaliers big man Kevin Love gave a shout-out on Twitter to some of his former teammates, but he did not give one to Kyrie Irving. LeBron James had a positive reaction to Love’s post. James, Irving and Love formed a Big 3 in Cleveland that had lots...

The Portland Trail Blazers and Damian Lillard are at a turning point this offseason. The franchise has not gone far in the playoffs in the last few seasons, despite having Damian Lillard in his prime. It would be hard to fault Lillard if he were to request a trade somewhere else.

Giannis Antetokounmpo made history by capturing his first NBA championship this year. At age 26, he is already a Hall of Famer with some exceptional achievements, including an NBA title, Finals MVP, 2 MVPs, and a Defensive Player of the Year Award. Even when The Greek Freak is blessed with incomparable athleticism, his hard work and dedication to his craft have allowed him to become the best player in the NBA.

The start of NBA free agency is almost upon us. And with it, there are tons of rumors swirling about which players could be switching teams this offseason. While free agents can't officially sign deals until Friday at 12:01 p.m. ET, they can start negotiating with teams on Monday at 6 p.m. ET. So that's when the excitement will begin, as there will likely be some notable moves occurring as soon as that period begins.

The Los Angeles Lakers have recently created a big three by adding Russell Westbrook to a duo of Anthony Davis and LeBron James. However, it is obvious that the front office has more work to do, as there is the question of filling out the rest of the roster around their stars.

LeBron James On GOAT Debate: "Any Time You’re Compared Or You’re Even Mentioned With The Greats To Ever Play This Game, It’s Become Humbling For Me."

LeBron James finally opened up on the never-ending GOAT debate. The Los Angeles Lakers superstar is mentioned in these conversations every year. That doesn't seem to be stopping soon. As he breaks more records and collects more accolades, his fans have a stronger case for the King as the greatest...

Since LeBron James signed with the Los Angeles Lakers in 2018, he and the Lakers have led the NBA in merchandise sales every season. Despite the emergence of a super team in the Eastern Conference and the rise of young stars across the league, that was unchanged this season. According...