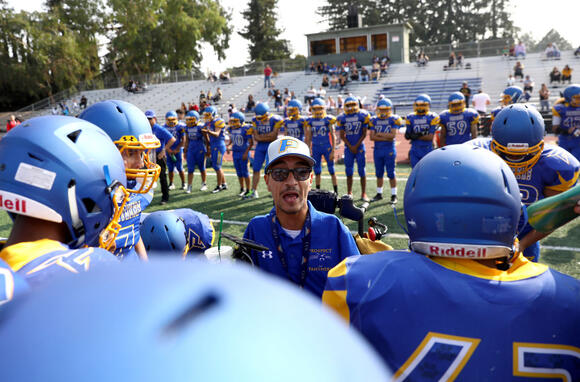 (CANTON, Ohio) Eight football coaches from McKinley Senior High School in Canton were placed on administrative leave on Friday after allegedly forcing a Jewish team member to violate his religious beliefs by requiring him to eat pepperoni pizza in front of the entire team.

According to Chabad.org, some Jews choose not to eat pork or crab because religious texts stipulate that practitioners only consume meat from animals that chew cud and have split hooves.

“The coach had a pork pizza as a penalty for this child not showing up for practice,” attorney Edward Gilbert, who is representing the student and his family, told News 5 Cleveland. “What’s interesting is everyone on the team knows this child will not eat pork.”

Gilbert said the event took place on May 24 in retaliation for the student, a junior, missing a May 20 practice due to an injury. Coaches allegedly told him that he would have to eat an entire pepperoni pizza in front of his team members, or else they would be forced to run extra practice maneuvers.

3News reported that the student in question is a 17-year-old who carries a 4.0 GPA and has already received scholarship offers from major university football programs.

A Facebook post from the Canton City School District states all eight coaches, including head coach Marcus Wattley, will remain on suspension as the district conducts an investigation into the alleged incident.

"The incident calls into question whether appropriate team management, discipline, and player accountability infrastructures are in place," reads the post.

"Once a conclusion is reached, in accordance with our commitment to transparency, the District will provide additional information," it continues.

When speaking publicly about the event on Tuesday, 3News reported that Gilbert said the student told his coaches he doesn't eat pork at least 10 times over the course of the punishment and is now seeking counseling as a result.

“Makes you question, are they doing their job or are they capable of doing their job? Obviously, I feel like the culture is broken," said Kenny Walker, the victim's father.

WASHINGTON — Americans should consider leaving Ukraine "now," nonemergency diplomatic employees were authorized to depart, and eligible family members were ordered to evacuate Sunday amid Russia's continued military presence along the country's border, the U.S. State Department said. While family members of embassy employees in Kyiv were required to...
U.S. POLITICS・10 HOURS AGO
The Hill

BIG SUR, Calif. (AP) — Firefighters on Saturday were battling a wildfire that broke out in the rugged mountains along Big Sur, forcing hundreds of residents on this precarious stretch of the California coast to evacuate and authorities to shut its main roadway. The fire started Friday night in...
CALIFORNIA STATE・21 HOURS AGO
CBS News

New Zealand Prime Minister Jacinda Ardern on Sunday canceled her upcoming wedding plans due to a recent spike in COVID-19 cases and tightened restrictions. "Such is life," she said when asked by reporters about how she felt about the cancellation, according to Reuters. "I am no different to, dare I...
PUBLIC HEALTH・13 HOURS AGO
ABC News

Sen. Kyrsten Sinema is hemorrhaging support from Democrats in her home state after blocking the advancement of voting rights legislation.
ARIZONA STATE・1 DAY AGO

It's the largest such sortie of the new year, continuing a pattern of threat.
AEROSPACE & DEFENSE・34 MINUTES AGO
NBC News

Britain’s accusation that the Kremlin is seeking to install a pro-Russian regime in Ukraine is “deeply concerning,” a National Security Council spokesperson said late Saturday. “The Ukrainian people have the sovereign right to determine their own future, and we stand with our democratically-elected partners in Ukraine,” Emily...
FOREIGN POLICY・19 HOURS AGO
NBC News

A Houston deputy was killed early Sunday morning after pulling a man over in what officials described as a "brutal attack." Cpl. Charles Galloway, 47, was shot multiple times after pulling over a white Toyota Avalon at about 12:45 a.m. Sunday, according to Harris County Constable Ted Heap. The man driving the car exited the vehicle and immediately began to shoot at Galloway, who died at the scene.
HOUSTON, TX・19 HOURS AGO
ABC News

Jason Miyares has made significant changes since ascending to his new job.
VIRGINIA STATE・7 HOURS AGO

(CNN) — Gonzaga University has suspended season tickets for one of its most notable alumni and Hall of Fame basketball player John Stockton after he refused to comply with the school's mask mandates at games, he said in an interview with The Spokesman-Review in Washington. The former Utah Jazz...
COLLEGE SPORTS・10 HOURS AGO
CBS News

Washington — Congressman Bennie Thompson, chairman of the House select committee investigating the January 6 assault on the U.S. Capitol, revealed Sunday that former Attorney General William Barr has spoken with investigators. "We've had conversations with the former attorney general already. We have talked to Department of Defense individuals,"...
PRESIDENTIAL ELECTION・18 HOURS AGO