National Running Day: Here are the best places to run in metro Detroit 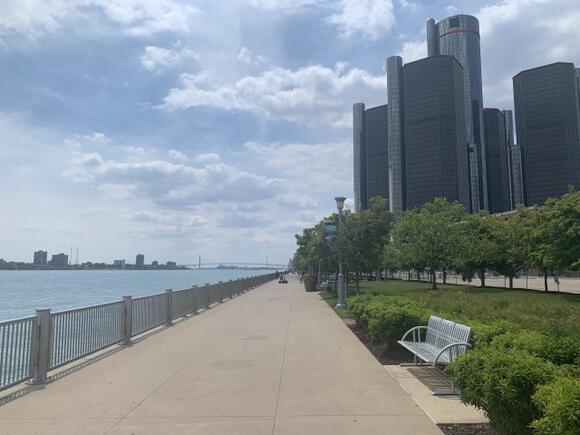 National Running Day comes every year on June 2, and metro Detroit has a variety of great spots to take a run or a walk. Check out some of the best places for a run below.

The Riverfront spans about four miles along the Detroit River. It features scenic views, and often, a cooling breeze off the water.

The 2-mile Dequindre Cut is an urban path that runs from Mack Ave. to the Riverwalk. There are running and walking paths, and bike paths.

You can run nearly the entire perimeter of Belle Isle in less than six miles. There is relatively no elevation gain and the loop has areas off the road to run.

At nearly 9 miles, the Paint Creek Trail runs through several cities and towns in Oakland County

The Clinton River Trail partially hits the Paint Creek Trail through Rochester all the way to Sylvan Lake.

Located in Wayne County, Hines Drives goes for about 17 miles and can be found in several cities

Located on Detroit's West Side, Rouge Park features a large loop trail that goes through the entire park.

Take in the scenes along Lake St. Clair by running on Lakeshore Dr. in Grosse Pointe. You'll have beautiful homes and scenic water views.

On a lot off Beatrice and Peters streets, you’ll find a little bit of everything: a damaged couch, bricks, and even a boat.

Bird lovers with cameras and binoculars are traveling to a stream in southeastern Michigan to see a rare creature with pink feathers and a long bill.

Delta variant not the dominant strain of coronavirus in Michigan, but expect that to change

The Delta variant of the coronavirus is in Michigan but is not yet the dominant strain, according to MDHHS Director Elizabeth Hertel.

Community-focused barbershops in the Detroit area can compete for a $10,000 grant as part of program designed to educate and empower African American men.

Nearly one month after floods first wreaked havoc on metro Detroit homeowners are still cleaning up, wondering if they’ll get help to pay for it.

The state announced the second round of winners in the MI Shot to Win Sweepstakes on Wednesday morning.

'We're seeing a high level of burnout.' How bad is Michigan's nursing shortage?

The Michigan Nurses Association recently released a video to lobby for new legislation to limit the number of hours RNs are forced to work and the number of patients they are assigned.

(WXYZ) — Detroit's historic Grand Trunk Pub is reopening after being closed for more than a year and a half for renovations. The building, located along Woodward Ave. in downtown Detroit, is reopening to the public on July 31. Fans of the restaurant can also get a sneak peek of...

Legendary rock band The Rolling Stones have rescheduled their "No Filter Tour" stop at Detroit for this fall.

We're used to seeing them on a firetruck or in an ambulance, rushing to save a life. But, Detroit's first responders are also working to get more Detroiters healthy through workouts.

General Motors is pausing production at some assembly plants because of the current chip shortage brought on by the pandemic.

The Little Free Library is bringing its "Read in Color" initiative to Detroit to distribute thousands of diverse books in neighborhoods.

The Brightmoore Music Series, which features local artists performing various genres of music, kicks off July 20 and runs until Sept. 11.

For the last three years, Eve Sandoval of Madison Heights has been raising and releasing butterflies in her backyard. Just last year, Sandoval raised and released around 160 of them.

A class-action lawsuit has been filed on behalf of people who live in Wayne County and had massive flooding after the heavy rain on June 26. The Great Lakes Water Authority, Detroit Water and Sewerage Department, and the City of Detroit are named as defendants.