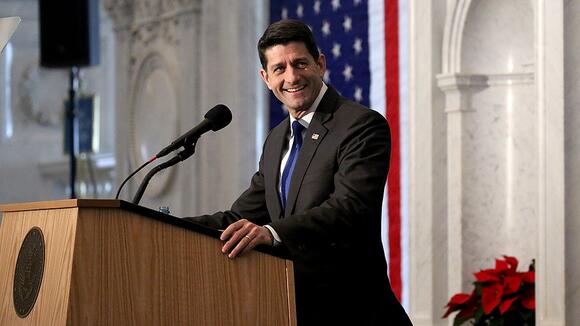 Journalist Zaid Jilani on Tuesday said that former Speaker Paul Ryan (R-Wis.) in telling conservatives last week to not become too focused on culture wars showed his fear of such battles crowding "out the issues that really concern him.”

Ryan in a speech last Thursday, delivered at the Ronald Reagan Presidential Library in California, cautioned GOP members “not to get caught up in every little cultural battle,” adding, "our party must be defined by more than a tussle over the latest grievance or perceived slight.”

Jilani in an interview on Hill.TV’s “Rising,” said that Ryan, who after leaving office started the policy group the American Idea Foundation, likely sees that Republicans in public office are “not mobilizing in large numbers against the welfare state, against social spending,” and other issues.

“It doesn’t mean that they’re not concerned about it, but it’s not really the hot button issue,” Jilani said. “I think that would threaten someone like Ryan, because Ryan would prefer that we were talking about Medicare being unsustainable, social security needing some form of private accounts or privatization,” the journalist added.

Jilani went on to say, “I think in many ways, the reason that he doesn’t want there to be culture wars is not necessarily just because the culture war can be very annoying at times to people on both sides, but because it crowds out the issues that really concern him and I think that’s part of why he gave this speech.”

Watch part of Jilani’s interview above.

Joe Biden was caught-off guard on Friday and had to be told there was something on his chin by an aide. The US president, who was in a meeting with governors and officials, received a card with a hand written note saying: “Sir, there is something on your chin”. The incident, which happened as his vice president Kamala Harris was addressing officials on the issue of wildfires, was caught on camera – and immediately went viral on social media. Mr Biden appeared to eventually remove whatever was on his chin, and was seen rubbing his face to remove the...

Zaid Jilani: Uptick in violent crime is a state and local issue, not a Biden issue

Zaid Jilani, a journalist and co-founder of Inquire More, joined Hill.TV on Monday to argue that an increase in crime in the United States is more of a local issue than one for President Biden . He argued that Biden should turn to a hyperlocal response in responding to rising...

CNN anchor Don Lemon had a heated clash with former Republican Ohio Gov. John Kasich over the remaining Americans who have yet to get vaccinated amid concerns of the contagious Delta variant of the coronavirus. During a panel discussion on Thursday night, Lemon began by asking Kasich if he thought...

Tim Ryan's explosive speech against House Minority Leader Kevin McCarthy's comments on face masks has been viewed more than 1 million times as the Ohio representative was widely praised on social media for his remarks. During a speech on Wednesday, Ryan spent his allotted time speaking about Republican lawmakers who...

On Monday a small band of U.S. Capitol Police officers delivered vivid, emotional testimony about a previously unthinkable event—the day a partisan mob stormed the Capitol to try to overturn an American election. Many Americans had already seen the sounds and images of that shocking day, but there was something about their description that brought the event more vividly to life.

A newspaper is reporting that U.S. Sen. Rand Paul’s 2016 presidential campaign committee has been fined $21,000 by the Federal Election Commission for improperly handling contributions

Where in the World is Kamala Harris? | Opinion

When a president pushes big legislative initiatives like Joe Biden's trillions for "infrastructure," his vice president always heads out on the trail, going from city to city, hyping the plan. The Veep holds rallies, appears on news shows eager for exclusive interviews and meets with local bigwigs. It's all designed to build momentum and spur public support.

It’s no secret that Senate Republican Leader Mitch McConnell is full of it. What’s stunning is the incredible amount of it the Louisville lawmaker continues to shovel out on a daily basis. McConnell entered the Senate chamber on Monday to bemoan President Biden’s inability to capitalize on what he characterized...

Democrats must work with Republicans on infrastructure

Words change frequently when Democrats are in charge. Liberals are now called progressives. Voter identification is called voter suppression. Mothers are now “birthing persons.”. One word that should be straightforward is infrastructure. When people think of infrastructure, they think of roads, bridges, ports, airports, and waterways. In the 21st century,...

It takes less than ever to find partisan grooves these days — and the fact that they’ve been etched deeper out of the fallout from Jan. 6 serves as a case in point. That’s the reality that confronts President Joe Biden with this next uncertain phase of combatting the pandemic. New federal guidance on mask mandates and the consideration of a vaccine requirement for federal workers run into longstanding political arguments about individual liberties and personal accountability.

Tucker Carlson: Democrats and the CDC have been lying about COVID and the vaccine

So you got the vaccine because they told you to get it — or they forced you to get it — because as Joe Biden himself explained, it was your patriotic duty to get it to protect yourself and others. Good people do that. The only way we can stop...

After Republican Leader Kevin McCarthy this week decried the House’s new face mask requirement, Speaker Nancy Pelosi (D-Calif.) replied with a considered response: “He’s such a moron.”. Mean! But if the dunce cap fits …. Such an incendiary charge by Pelosi demands a fact check: Is McCarthy, in fact, a...

'Sir, there is something on your chin': Moment Biden wipes his face after staffer spotted a yellow mark and handed him a note during Zoom meeting with governors

President Biden was prompted to wipe a yellow mark from his face during a Zoom meeting with western governors on Friday after a staffer handed him a note saying: 'Sir, there is something on your chin'. Biden was speaking about the responses to raging wildfires throughout the country when an...