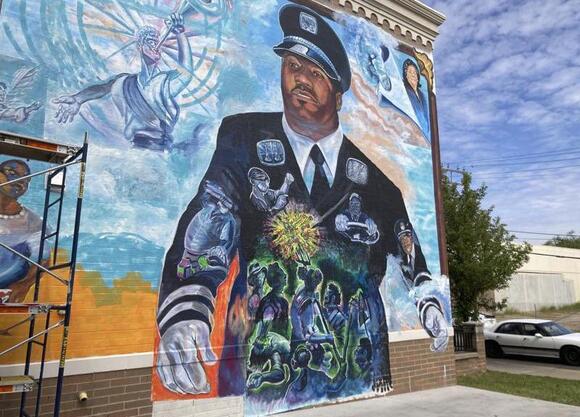 DETROIT (AP) — A large mural honoring a firefighter and other Detroit public employees who died from COVID-19 has been unveiled next to a fire station.

Capt. Franklin Williams of the fire department dominates the painting. But there are images of a bus driver who made an emotional plea for protection from COVID-19 before he caught the virus, and 5-year-old girl Skylar Herbert, who was the daughter of a firefighter and police officer. 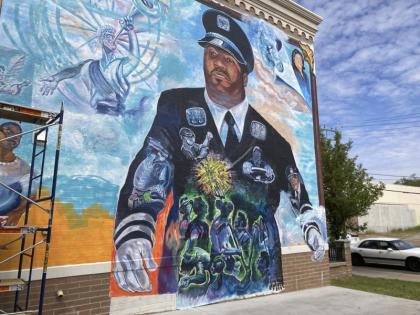 A large mural honoring firefighter Capt. Franklin Williams and other Detroit public employees who died from COVID-19 is displayed on the side of a building, Monday, May 31, 2021, in Detroit. The mural, which faces a Detroit fire station, was created by artist Charles “Chazz” Miller with assistance from students at University of Detroit Mercy, the Detroit Free Press reported. It was unveiled Sunday, May 30. (AP Photo/Ed White)

“This mural represents community heroes representing those institutions who also fought for our country by putting on a uniform and fighting an unknown enemy: COVID-19,” said Odie Fakhouri, chief operating officer of the Arab American and Chaldean Council, which owns the building on Seven Mile Road.

Williams, 57, was eligible to retire from the fire department but wanted to work until age 60. He died last summer.

“Some of them became ill, some of them were hospitalized, and Franklin made the ultimate sacrifice,” Fire Commissioner Eric Jones said at the Sunday unveiling.

The mural was created by artist Charles “Chazz” Miller with assistance from students at the University of Detroit Mercy, the Detroit Free Press reported .

The mural has the face of bus driver Jason Hargrove, 50, who died early in the pandemic. He became ill four days after posting an angry, profanity-laced Facebook video about the risks when coughing passengers don’t wear masks.

“Everybody in America” should watch Hargrove’s video, Mayor Mike Duggan said at the time.

© 2021 Associated Press. All Rights Reserved. This material may not be published, broadcast, rewritten, or redistributed.

(CBS DETROIT) – Oakland County is one of the first counties in Metro Detroit to reach and surpass the goal of having 70% of its residents vaccinated, and they have plans to continue these efforts throughout the next couple of months. Now, they will focus on back-to-school efforts to get...

DETROIT (AP) — The head of a regional water agency in southeastern Michigan said Tuesday, July 27, that she would resign, weeks after thousands of homes were spoiled by sewage backups during a tremendous storm. Sue McCormick didn’t cite the June 25-26 flooding as the reason for her departure, though...

(CBS DETROIT) – The disabled community has its share of challenges, but having access to health care shouldn’t be one of them. That’s what Jeffrey Nolish from Detroit Disability Power is saying about vaccine accessibility for the vulnerable population. “I think the state is at around 54-58% vaccination rate, and...

DETROIT (AP) – The board for a regional water authority has approved the selection of engineering firms that will look at system operations during heavy rainstorms that left thousands of basements and dozens of streets flooded in the Detroit area. Global infrastructure consulting firm AECOM and consulting engineering firm Applied...

LANSING, Mich. (AP) — Gov. Gretchen Whitmer on Tuesday, July 27, resumed wearing a mask at indoor events, citing revised guidance from the Centers for Disease Control and Prevention and a recommendation from Michigan’s chief doctor. The Democratic governor, who is vaccinated, said she does not anticipate reinstating a face-covering...

LANSING, Mich. (AP) — Spectrum Health, a 14-hospital network in western Michigan, said Wednesday, July 28, it will mandate COVID-19 vaccinations for employees, volunteers, and contractors — becoming at least the third hospital system in the state to announce the requirement. Grand Rapids-based Spectrum, which has 31,000 employees, joins the...

DETROIT (AP) – A Detroit City Council member has been charged with conspiracy to commit bribery and accused of accepting $1,000 from an undercover law enforcement agent. Andre Spivey was named late Tuesday in an indictment filed in federal court in Detroit. The bribe allegedly was accepted on Oct. 26,...

(CBS DETROIT) – On Thursday, July 29, Gov. Gretchen Whitmer announced a plan to use $10 million in state general funds to help support households impacted by the extreme flooding on June 25 and 26. The funds will be distributed to the City of Detroit, and Wayne, and Washtenaw counties...

LANSING, Mich. (AP) — Two of Michigan’s largest health systems will require all employees and physicians at their hospitals and other facilities to be vaccinated against COVID-19. Spectrum Health, a 14-hospital network, and eight-hospital Beaumont Health announced the mandates Wednesday, July 28. At least five major hospital systems in the state have announced such requirements.

(CBS DETROIT) – Maybury Elementary School teacher Benjamin Royal is falling back from returning to class this fall. The fourth and fifth-grade instructor is rejecting an agreement made between the Detroit Public Schools Community District and the Detroit Federation of Teachers. Union and district administrators reached a deal to reopen...

DETROIT (AP) — Arbitrators have awarded about $10 million to a Detroit-area man who spent more than 16 years in prison before two murder convictions were overturned. Mubarez Ahmed insisted he was wrongly convicted of a 2001 double homicide in Detroit. The Wayne County prosecutor’s office in 2018 acknowledged that the convictions were fueled by false testimony and other problems.

ALPENA, Mich. — The Michigan National Guard, in coordination with the Michigan Department of Transportation (MDOT) and local partners, plans to close a portion of Michigan State Highway M-32 for five hours on August 5 to test its ability to land aircraft on roadways designed for cars and trucks. The...

(CBS DETROIT) – T-shirts designed by youth in the Detroit area are now available in select stores downtown and are being given out as a free gift with any $25 purchase. The shirts depict the message “I’m Possible: Detroiters Make the Impossible, Possible.”. They were designed by the Boys &...

(CBS DETROIT) – In a big step to fight the spread of the Delta Variant, Ascension Health System will require its workers to get vaccinated for COVID-19. All associates must be fully vaccinated by November 12 of this year. In a statement, Ascension says the decision was based on its...

DETROIT (AP) — The United Auto Workers union says it got $1.1 million for a lakefront house in northern Michigan that was being built for a former president who was sentenced to prison in a federal corruption probe. Cabin 4 at a UAW conference center on Black Lake was being...

(CBS DETROIT) – It’s been 31 years since the Americans with Disabilities Act was signed into law, and Detroit is commemorating the date with new plans to help those with disabilities. “In Detroit, we recognize the challenges members of our disabled community face when trying to access information, city services,...

(CBS DETROIT) – The hot dog stands at Home Depot have been closed due to the coronavirus pandemic, but now it has been announced that they will not be reopening in any of the company’s Michigan locations. Hot Diggity Dog LLC. announced the closure in a Facebook post. “Hot Diggitty...