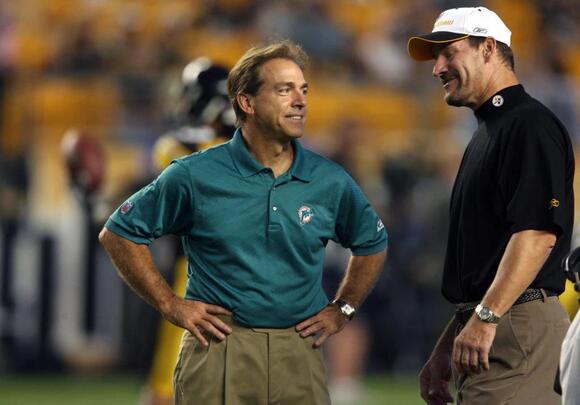 Alabama head coach Nick Saban abruptly left the NFL before arriving in Tuscaloosa, and the story behind his departure from the Miami Dolphins is absolutely fascinating.

Saban didn’t fare poorly in the pros to the point where he was fired. He left on his own volition after only two seasons, quickly realizing his style was better suited for the college game.

And who can argue with him? Saban helped build up Michigan State’s football program, and won a national championship at LSU before returning to the NFL gridiron. His tenure at Alabama has been nothing short of legendary, with six national titles to date.

Saban didn’t lack pro experience prior to his stint with the Dolphins, though. He’d served two seasons in the late 80s as a Houston Oilers defensive backs coach, and was Bill Belichick’s defensive coordinator on the Cleveland Browns for four seasons. 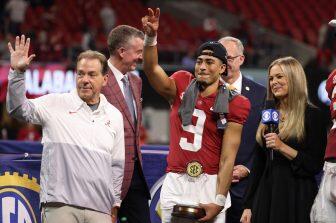 So, what ultimately led Saban to decide that the NCAA was best for him? We’ll look at three big reasons why, and break down what might’ve happened if Saban stuck with the NFL.

1. ‘The Process’ didn’t translate to the pros

Saban’s “Process” involves him being a grating, meticulous disciplinarian whose no-nonsense approach and sky-high standards draw the absolute best out of his players.

This has worked wonders for Saban at Alabama but wasn’t as translatable to the NFL. Why? Well, Saban has developed an impeccable reputation at the college level. He also recruits many of the best prospects in the country to come play for him. Many of these young men aspire to be in the NFL and know they’ll optimize their chances by playing for Saban in Tuscaloosa.

But an NFL locker room is an entirely different matter. These are grown men, and veterans who know what it takes to be a successful pro don’t need Saban constantly on their case or lecturing them. It was clear when Saban posted a 15-17 record that his message wasn’t quite getting through in Miami.

However, Saban leaving the NFL was a little more complicated than “ The Process ” not having the same magic at a higher level of football. His teams still bought in enough to go on some impressive winning streaks of six his first season and four in his second.

Although he won his NFL coaching debut in 2005, Saban wasn’t exactly accustomed to losing after a 48-16 tenure at LSU. In fact, he’d never posted a losing record in a single season.

The losses piled up in Saban’s maiden NFL campaign, though, as the Dolphins stumbled to a 3-7 record. Then, something extraordinary happened: They rattled off six straight victories to close out the slate, and their 9-7 mark left them just outside the playoff picture.

Because of that exceptional finish, there was optimism that Miami’s program was moving in the right direction. Unfortunately, a similar situation unfolded in 2006, only worse. The Fins started 1-6, rebounded with four straight wins, but finished 6-10 overall.

Two consecutive bad starts and regression in Year 2 gave Saban serious second thoughts about the NFL. He was linked to the Alabama coaching vacancy and had to publicly answer questions about the Crimson Tide’s rumored interest in him before Miami’s season even ended.

After several public denials that he’d wind up at Alabama, as it turned out, Saban met with the school’s leadership on New Year’s Day 2007 and accepted the Tide’s head coaching job two days later.

3. Bad quarterback play and missing out on Drew Brees

Even when the Fins went 9-7 under Saban, they had freaking Gus Frerotte at quarterback. He’s more famous for injuring himself on a celebratory headbutt than anything else. Frerotte went 9-6 as a starter in 2005 despite completing 52% of his passes and logging a 71.9 passer rating.

Talk about a phenomenal coaching effort by Saban.

Before you jump all over Saban for leaving the Dolphins, bear in mind that during his final year, instead of trotting out his desired quarterback in Drew Brees, Miami went with a combination of a past-his-prime Daunte Culpepper, draft bust Joey Harrington and Cleo Lemon. It’s a wonder they managed to win six games in 2006.

As recently as April 2020 on The Dan Patrick Show , Saban opened the old wound about missing out on Brees , who was a free agent prior to Saban’s second season in Miami, per Saturday Down South:

Our first choice was to take Drew Brees. The medical people made that decision (to pass on Brees) relative to Drew Brees’ shoulder, his situation, it was his throwing arm. […] That was a medical decision, it was not an organizational decision. You know, we wanted to take Drew Brees, he’s the first guy that we brought in, he’s the first guy that we made a deal with. But it was a medical issue that created that.

Nick Saban on the medical concerns regarding Drew Brees

Instead of signing Brees like Saban wanted, the Dolphins went with Daunte Culpepper. Team doctors had failed Brees’ physical, and he wound up going to the New Orleans Saints. Brees led them to the NFC Championship Game in his first year, and the rest, as they say, is history.

In an article by The Advocate , you can get a sense of how Brees felt about Saban and the Dolphins organization :

“I have a lot of respect for Coach Saban…I felt like he was honest with me when I was down there. But I felt like when I was here in New Orleans, I was embraced. I was given confidence that, ‘You’re our guy, and we know the situation you’re in but we know you’re going to come back and lead this team and this community.’ The impression I got when I was (in Miami) was, ‘Hey, we like you, but we’re not sure.’ I got the sense I was being evaluated every second I was there.”

Drew Brees on choosing Saints over Dolphins in free agency

That just makes matters worse for Dolphins fans. They’re hoping that Saban’s former Alabama QB Tua Tagovailoa evolves into the long-term answer under center they’ve coveted since Dan Marino retired. Brees could’ve been that guy, and had Miami signed him, Saban might still be there. 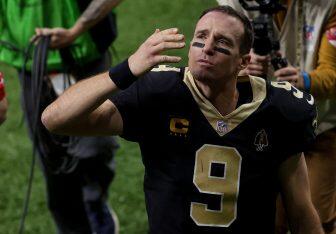 What if Nick Saban had stayed in the NFL?

Well, it’s hard to know. The Brees scenario is its own alternate timeline/parallel universe in which we could’ve seen the QB and Saban combine to win multiple Super Bowls. Think about it: Brees’ uncanny accuracy, historic passing production and leadership combined with Saban’s defensive genius. What a combo it could’ve been.

If Alabama hadn’t made Saban such a crazy offer — at the time, an eight-year contract worth $32 million was absolutely bonkers — maybe he would’ve stuck it out in Miami. Otherwise, maybe another organization would’ve taken a chance on him.

It’s quite possible that Saban would’ve returned to be Belichick’s defensive coordinator on the New England Patriots, but then again, maybe he wouldn’t want to take a step down.

As it turned out, that NFL offseason opened up tons of fascinating coaching vacancies around the league. 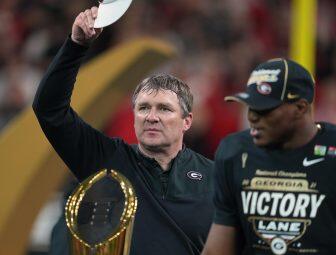 The Pittsburgh Steelers hired Mike Tomlin to succeed Bill Cowher, a 31-year-old Lane Kiffin — who was Saban’s offensive coordinator from 2014 to 2016 — landed the Raiders’ gig, and the Chargers replaced the late, great Marty Schottenheimer with Norv Turner despite posting a 14-2 record the year before.

Also, the Dallas Cowboys were in the market for a new coach once Bill Parcells retired.

Imagine if Saban followed Cowher in Pittsburgh. Or beat out Kiffin to lead the Silver and Black. Or if he got the chance to coach the Bolts during LaDainian Tomlinson’s prime. Oh yeah, and Saban could’ve had a crack at coaching the Cowboys.

Three of those franchises are unmistakably iconic, and the Chargers, at the time, probably had the best collection of talent in the NFL.

Again, the “what if?” possibilities of what would’ve happened if Saban had stayed in the NFL are mind-blowing. At least in his case, everything worked out for the best, because he’s now regarded as arguably the best college football coach ever.

A grand jury indicted former Georgia linebacker Adam Anderson on Tuesday and charged him with rape. Anderson will be arraigned
NFL・23 DAYS AGO
Sportsnaut

Here’s our 2022 NBA mock draft with the annual event quickly approaching next month. The Houston Rockets grab a talented
NBA・2 DAYS AGO
Sportsnaut

Bookmark. Save. Favorite. Do your thing. This is the one-stop-shop for everything NBA schedule-related heading into the 2021-22 season: Related:
BROOKLYN, NY・3 HOURS AGO

It’s been just over three months since millions of spectators witnessed Odell Beckham Jr. tear his ACL in the biggest
LOS ANGELES, CA・2 DAYS AGO
Sportsnaut

Wide receiver Jordan Addison announced Thursday that he will transfer from Pitt to Southern California. Addison, a consensus All-American and
BATON ROUGE, LA・12 HOURS AGO
Sportsnaut

Nothing gets the people going quite like the Stanley Cup Playoffs. Find out how to live stream every NHL Playoff game here.
NHL・19 HOURS AGO
Sportsnaut

Alabama coach Nick Saban called out Texas A&M and two other schools during a speech for leveraging name, image and
BIRMINGHAM, AL・19 HOURS AGO
Sportsnaut

Nowadays, NFL stars can be found on nearly every team at the wide receiver position, but there was a time
NEW ORLEANS, LA・17 HOURS AGO

The results of the 2022 NBA Draft lottery are now official with the Orlando Magic “earning” the right to pick
PORTLAND, OR・2 DAYS AGO
Sportsnaut

Deion Sanders was on the receiving end of a pretty serious claim from Alabama head coach Nick Saban on Wednesday
JACKSON, MS・9 HOURS AGO
Sportsnaut

Despite entering the league as a third-round pick in the 2012 NFL Draft, T.Y. Hilton has racked up nearly 3,000
INDIANAPOLIS, IN・15 HOURS AGO
Sportsnaut

Following their surprise Super Bowl LVI appearance, one of the top defenders and team captain Jessie Bates was hit with
CINCINNATI, OH・16 HOURS AGO