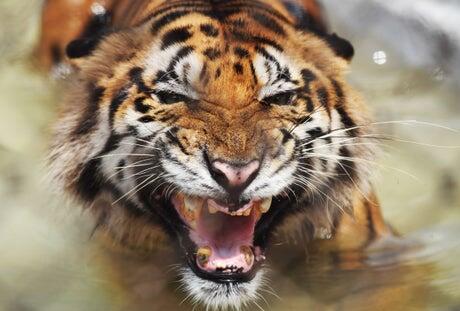 After evading arrest for nearly 20 years, a “prolific” tiger poacher, charged with killing 70 animals, was taken into custody by the Bangladesh authorities on Saturday.

Habib Talukder, 50, also known as Tiger Habib, was listed as the most wanted fugitive by both India and Bangladesh’s police and forest departments.

Police said they received a tip-off about his whereabouts at Madhya Sonatola village , adjacent to the forest, and arrested him in the early hours of Saturday.

The Dhaka Tribune reported that Mr Talukder operated in the Sundarbans mangrove forest on the border between India and Bangladesh. This area is known to have the world’s largest population of the Royal Bengal tigers.

Police chief Saidur Rahman said that arrest warrants had been issued for Mr Talukder earlier in three cases. “He was on the run for a long time.” Black market traders buy tiger bones, pelts, and flesh around the globe.

Mr Talukder was produced before a court and sent to jail on Saturday afternoon.

Md Joynal Abedin, the assistant conservator of forests of Sharankhola range, told the media that Mr Talukder had confessed to killing 70 tigers and was accused “in nine cases filed over forest crimes.”

He said: “He secretly entered the Sundarbans and hunted wild animals despite being banned from entering the forest long ago. He has been carrying out these criminal activities even though there are multiple cases against him… some powerful gangs are involved in this.”

The locals said that local people were scared of Mr Talukdar. One local, Abdus Salam, was quoted by the AFP as saying: “He's a dangerous man who could fight alone with [tigers] inside the forest.”

In 2018, there were 114 Royal Bengal tigers in the Sundarbans that fall under Bangladesh. According to the tiger census, in 2015, there were just 106.

As per the Bangladesh forest department data, 38 tigers had died in the Sundarbans between 2001 and July 2020. A number of them had been killed by poachers.

Bangladesh: 54 dengue death reported this year to date, Most from Dhaka

The Directorate General of Health Services (DGHS) in Bangladesh reported an additional 248 dengue fever cases hospitalized on Friday, bringing the total for the year to 13,255. Of the new cases, 214 are hospitalized in the capital of Dhaka, while the remaining 34 were outside the city. No new fatalities...
PUBLIC HEALTH・13 DAYS AGO
TheDailyBeast

Detectives investigating the fatal shooting of Lyra McKee—the 29-year-old journalist who was killed while observing rioting in the Northern Irish city of Derry two years ago—have arrested four unnamed men. All four of them were arrested under Terrorism Act, police told BBC News, and their ages were listed as 19, 20, 21, and 33. “These arrests are the culmination of a detailed two-year investigation into Lyra’s murder and the events which preceded it,” Det. Supt. Jason Murphy reportedly said. McKee was described as one of the country’s “most promising” reporters after she was shot dead when observing unrest in April 2019. The New IRA, a dissident Irish republican group, admitted responsibility and apologized, saying that the unidentified gunman was aiming at police and not McKee.
WORLD・8 DAYS AGO
Imperial Valley Press Online

DHAKA, Bangladesh — Bangladesh has reopened schools and other educational institutions after 543 days of closure as its virus situation eases and more people are vaccinated. Schools were closed on March 17, 2020, after the virus arrived in the nation of over 160 million people. Authorities decided to reopen after almost 97% of the country’s teachers and staff have been vaccinated, the government says.
EDUCATION・11 DAYS AGO
centralrecorder.com

A NAZI death squad member whose unit reportedly killed TWO MILLION people has died at the age of 97 – without facing justice. Helmut Oberlander passed away “surrounded by loved ones” at his home in Ontario, Canada, his family said. The former Nazi died as he faced being deported back...
PUBLIC SAFETY・10 HOURS AGO

The case dates back to March 2018, when former Russian agent Sergei Skripal and his daughter, Yulia, were targeted in a nerve agent attack.
PUBLIC SAFETY・2 DAYS AGO
Voice of America

Myanmar troops killed several members of a local "defense force" in a day of clashes, the junta said Friday, with local residents and media reporting at least 10 dead. The country has been in turmoil since a February coup and a military crackdown on dissent that has killed more than 1,000 people, according to a local monitoring group.
MILITARY・13 DAYS AGO
AFP

Delivering vaccines to Myanmar's junta, but also to rebel groups that are the generals' sworn enemies, China is playing both sides to fight the coronavirus and strengthen its hand in the messy politics of its southern neighbour. Health workers had also crossed over from China to deliver masks and hand sanitiser, he added.
PUBLIC HEALTH・1 DAY AGO
The US Sun

AUSTRALIA'S Covid lockdown is so brutal it's driven an escaped convict to hand himself in - after a whopping 30 years on the run. Darko Desic, 64, walked back into jail after deciding his life was better on the inside. He was 13 months into a three-and-a-half year sentence when...
PUBLIC HEALTH・8 DAYS AGO

A flashy cop with a taste for fast cars falls from grace following the leak of spine-chilling footage of a brutal interrogation gone wrong. - Flash cop, fast cars - Revelations about Thitisan's wealthy lifestyle and a string of celebrity relationships made headlines after his arrest.
WORLD・1 DAY AGO
The Independent

Canadian recounts her abduction by jihadis in Burkina Faso

Nearly a year and a half after being abducted by Islamic extremists in Burkina Faso, Edith Blais risked her life to escape, fearing she’d never be free. ”(What you’re thinking is either) you stay there your whole life and you die there, or you try something,” Blais told The Associated Press by phone ahead of this week’s publication of her book recounting the ordeal, “The Weight of Sand: My 450 Days Held Hostage in the Sahara ” The 37-year-old Canadian and her Italian companion Luca Tacchetto, were captured by jihadis in December 2018 in eastern Burkina Faso while touring...
PUBLIC SAFETY・1 DAY AGO
The Independent

Dozens of climate protesters have been arrested after blocking parts of the M25 for a second time in three days.Insulate Britain activists halted traffic on three sections of the country’s biggest motorway on Wednesday morning causing queues along the road.Three people have also been arrested on suspicion of organising the event.The protesters targeted Junctions 1a and 1b for Dartford, Kent, the main carriageway between Junction 8 at Reigate and Junction 9 at Leatherhead, Surrey, and Junction 23 for South Mimms, Hertfordshire.Insulate Britain said it was demanding “credible action” from the government to target climate change, by insulating all homes...
PROTESTS・2 DAYS AGO
The Independent

A new secure online forum for prosecutors working to end wildlife crime has been established to strengthen the fight against poachers. The forum, which involves 11 African countries, will significantly speed up justice against international poaching networks, their local kingpins and footsoldiers.The East Africa Association of Prosecutors (EAAP) launched the Forum for Wildlife and Environmental Crimes Prosecutors during its ninth Annual General Meeting in Arusha, Tanzania, held between August 30 and September 2 with the support of Space for Giants, an international conservation organisation.During the Meeting, prosecutors from five new countries - DR Congo, Ethiopia, Malawi, Mozambique, and Zambia -...
ANIMALS・1 DAY AGO
AFP

Nearly 2,500 rare rhino horns were destroyed Wednesday in the first ceremony of its kind in northeastern India as part of an anti-poaching drive to mark World Rhino Day. But the global body added that rhino poaching deaths have been declining in recent years amid conservation efforts in India and neighbouring Nepal.
ANIMALS・1 DAY AGO
AFP

Thousands have fled a town in west Myanmar after days of fighting between anti-junta dissidents and the military, during which soldiers bombed civilian homes, residents and media said Wednesday. Myanmar has been in turmoil since Aung San Suu Kyi's government was ousted by the military in February, sparking a nationwide uprising that the junta has tried to crush. Attacks on junta troops have increased after lawmakers ousted by the generals called for a "people's defensive war" earlier this month. Soldiers fought battle with around 100 members of a local defence group after being "ambushed" in Thantlang in remote Chin state near the India border on September 18, junta spokesman Zaw Min Thun said Tuesday.
WORLD・1 DAY AGO
AFP

Sudan's fragile transitional government said it foiled an attempted coup Tuesday involving military officers and civilians linked to the ousted regime of longtime autocrat Omar al-Bashir. Prime Minister Abdalla Hamdok said the coup attempt was the "latest manifestation of the national crisis", referring to deep divisions threatening Sudan's democratic transition. In a televised speech, he said the plotters had "made extensive preparations, which were showcased in the security breakdown in cities... blocking of national roads, closure of ports and persistent instigation against the civilian government". Information Minister Hamza Baloul said later the coup attempt had been thwarted.
WORLD・1 DAY AGO
The Independent

More than 90 people have been arrested after climate crisis protesters blocked off the M25 motorway during the morning rush hour, sparking huge delays.Insulate Britain held sit-in demonstrations at several locations across the southeast on Monday including Hertfordshire, Surrey, Kent and Essex.About 20 protesters were filmed sitting in the middle of the road at junction 20 in Kings Langley, Hertfordshire, blocking access to the roundabout from both sides.There were also reports of demonstrations at junction 3 in Swanley, junction 6 in Godstone, junction 14 at Heathrow, junction 30 at Thurrock and junction 31 at Lakeside/Purfleet.Video footage posted on Twitter...
TRAFFIC・2 DAYS AGO
AFP

An Australian adviser to Myanmar's ousted leader Aung San Suu Kyi appeared in a junta court to face immigration and official secrets charges, a lawyer involved in the case said Thursday. Turnell has been held at Insein Prison in Yangon since his arrest and appeared "frail and tired" in court in the capital Naypyidaw, said lawyer Khin Maung Zaw, who is working on the case.
IMMIGRATION・17 HOURS AGO
The Independent

British police investigating the killing of a 28-year-old woman in London said Thursday they are probing whether she was attacked by a stranger, in a case that sparked new concerns for the safety of women walking the capital's streets. The Metropolitan Police are calling for information over the killing of primary school teacher Sabina Nessa on Sept. 17 in Kidbrooke, southeast London. Detectives believe she was attacked during what would have been a five-minute walk through a local park on her way to meet a friend at a pub. A spokesman for British Prime Minister Boris Johnson said authorities...
PUBLIC SAFETY・12 HOURS AGO
The Independent

Britain paid compensation for 289 Afghan deaths at an average of £2,380 per civilian

The government has paid out compensation for the deaths of 289 civilians in Afghanistan, including at least 16 children, according to analysis of official figures.The study of internal Ministry of Defence documents shows overall, £688,000 was paid out by the British military for the deaths, an average of £2,380 per fatality.The findings are from an analysis by charity Action on Armed Violence (AOAV) and relate to deaths in 189 incidents between 2006 and 2013.Some £397,000 was paid out for 240 injuries, an average of £1,654, the charity said.The Ministry of Defence (MoD) said the UK had always sought to...
MILITARY・57 MINUTES AGO
Imperial Valley Press Online

DHAKA, Bangladesh — Bangladesh has reopened schools and other educational institutions after 543 days of closure as its virus situation eases and more people are vaccinated. Schools were closed on March 17, 2020, after the virus arrived in the nation of over 160 million people. Authorities decided to reopen after almost 97% of the country’s teachers and staff have been vaccinated, the government says.
EDUCATION・11 DAYS AGO