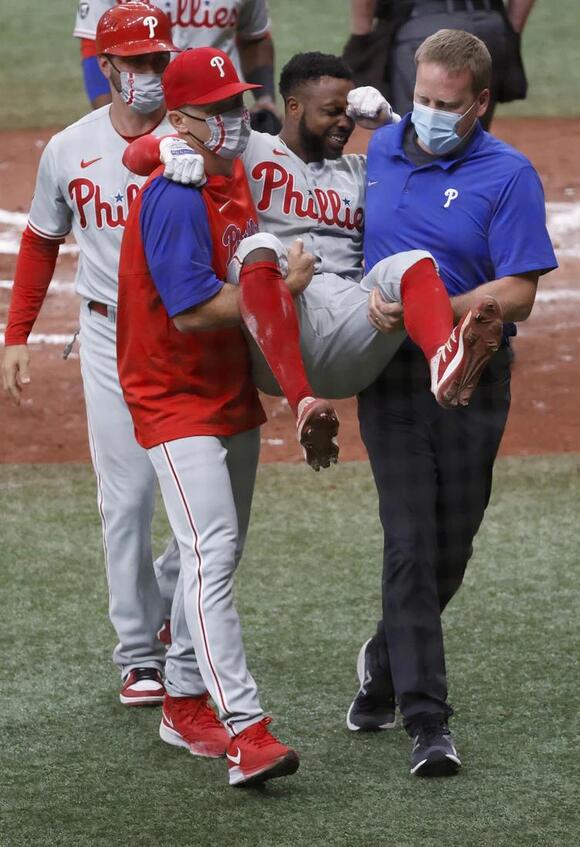 The Phillies announced Monday that Quinn, 28, will have surgery later this week. He was placed on the 60-day injured list Sunday.

Quinn had to be carried off the field Saturday after sustaining the injury while running the bases in the fifth inning of a 5-3 loss to the Tampa Bay Rays in St. Petersburg, Fla.

Related: If you’re a fan of the Phillies, check out #RingTheBell rumors, rankings, and news here .

Quinn was on first base when Ronald Torreyes rifled a double to right. Odubel Herrera easily scored from second and Quinn was racing around the bases before suddenly collapsing between third and home.

Quinn got up and took another step with both feet before he hopped on his right foot three times to reach home plate and score the run. He fell to the ground and was in apparent pain while being attended to by a team trainer before being carried off.

This is the second major Achilles injury Quinn has suffered in his career. He ruptured his right Achilles in workouts following the 2013 season. 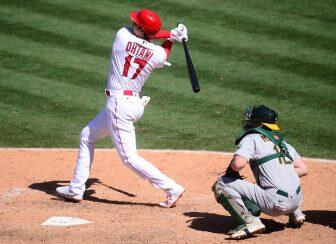 The National League East is about to get weaker, as the Washington Nationals are “finalizing” a deal to send three-time Cy Young Award winner Max Scherzer and All-Star shortstop Trea Turner to the Los Angeles Dodgers, per ESPN‘s Jeff Passan. Bob Nightengale of USA Today notes that once all medical...

UPDATE [5:00 p.m.] — Despite the addition of Tyler Anderson to the starting rotation, the Phillies are still in the market for bullpen help. And, according to Jim Salisbury, Craig Kimbrel remains an option, albeit a longshot. The other? Ryan Tepera, who we discussed in more depth below. Stay tuned...

With the MLB trade deadline now less than a week away, rumors are starting to heat up when it comes to the Philadelphia Phillies. All reports continue to suggest Dave Dombrowski is looking to “buy” at this year’s deadline, due to the NL East still being within striking distance. While...

MLB trade rumors: Phillies 'among teams to check in' on outfielder Starling Marte

If the Phillies keep winning — they've won 10 of 14 and are now 47-45 on the season, just two games behind the Mets for first place in the NL East — get ready for a lot more stories in the next week and a half about their interest in this player and that player.

The New York Yankees and Philadelphia Phillies play the second game of their two-game series on Wednesday night. First pitch is set for 7:05 p.m. at Yankee Stadium. The game will be broadcast on the YES Network. Afternoon thunderstorms should move out and the forecast calls for a party cloudy skies with only a 13% chance of a rain at first.

Phillies: This Struggling Player is a Top-Ranked Trade Piece

The Philadelphia Phillies have quite a few struggling players and not a lot going on in the farm system, which makes their trade deadline moves all the more unpredictable. Will Dave Dombrowski trade someone from the big-league squad, or bundle some unexpected prospects? Maybe both, maybe neither! It’s all very hectic.

The Miami Marlins (39-50) and Philadelphia Phillies (44-44) kick-off their second halves of the season with a seven-inning doubleheader Friday at Citizens Bank Park in Philadelphia. Game 1's first pitch is scheduled for 4:05 p.m. ET. Let's analyze BetMGM Sportsbook's lines around the Marlins vs. Phillies odds with MLB picks and predictions.

Philadelphia Phillies second half will rush at them quickly

The first surprise of the All-Star break for many Philadelphia Phillies fans had nothing to do with J.T. Realmuto or Zack Wheeler, their representatives, or their performances in the big game, or any Eagles news (always possible), but the fact that Baseball Reference had just picked Philadelphia to win the NL East.

When the Phillies rolled out their first four pitchers to begin the second-half of the series, Aaron Nola was not included as part of the rotation. Nola has been out on the COVID-19 list, which forced him to miss his last start on Sunday against the Red Sox. Today Phillies...

Concluding my three-part series where I handed out midseason report card grades to the Philadelphia Phillies roster, it’s now time to talk about the team’s offense. An area of this roster that many expected to rank towards the top of baseball, the Phillies offense has largely been an inconsistent one.

The Minnesota Twins, who are 39-50 this season and 15 games behind the first-place Chicago White Sox in the AL Central, are expected to sell ahead of this month's trade deadline. Oft-injured outfielder Byron Buxton, who will become a free agent after the 2022 season, could reportedly be moved. According...

Philadelphia Phillies starter Zach Eflin isn’t having the best season, but he does have one stat that really stands out (in a good way). He’s only walked 14 batters over 102 innings. By comparison, his rotation-mates Zack Wheeler and Aaron Nola, the only other pitchers on the Phillies who’ve thrown...

Llovera was recalled from Triple-A Lehigh Valley on Tuesday. The right-hander was sent to Triple-A over the weekend but will make a quick return to the Phillies with relievers JD Hammer (undisclosed) and Bailey Falter (undisclosed) placed on the COVID-19 injured list. Llovera pitched a scoreless frame in his lone appearance of the season and should fill a low-leverage role out of the bullpen.

"Tough night for us," Harper said, "but I thought we battled the best we could throughout the game and never gave up."

Is Bryce Harper trying to send a message to the fans, or the Philadelphia Phillies front office?. During Monday night’s series opener against the Washington Nationals, several fans noticed that Harper’s bat bore someone else’s name and MLB team. It’s not every day you see a Phillies hitter stepping up...

The MLB trade deadline is nine days away, and a majority of the discussion surrounding the Philadelphia Phillies has been in regards to two positions: bullpen and center field. For what it’s worth, both positions unquestionably need to be upgraded moving forward. The Phillies still own one of the worst...