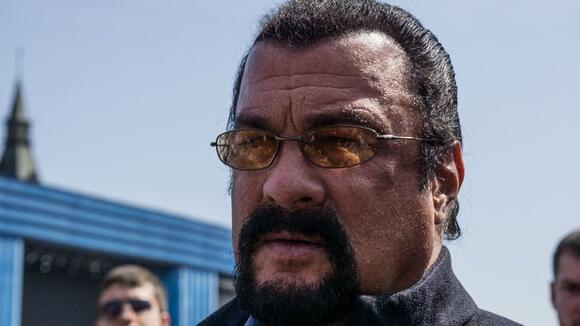 Actor and martial artist Steven Seagal, who has long been an admirer of Russian President Vladimir Putin , has joined a pro-Kremlin party.

Reuters reports that the Just Russia - Patriots - For Truth announced in a video on Saturday that Seagal, 69, who has held Russian citizenship since 2016, had received party membership. The party was created earlier this year when three pro-Putin leftist parties formed into one.

Seagal called for a crackdown on businesses that harm the environment in his welcome speech, Reuters reports.

"Without being able to arrest people, when we just fine them, they are probably making more money of the production of the things that are defiling the environment," Seagal said.

Reuters notes that the actor was granted Russian citizenship by Putin, who is a fan of martial arts.

Seagal has worked as a representative of Russia in the past, being tasked with improving humanitarian ties with the U.S. in 2018 and representing Russia in Venezuela in early May.

Seagal is best known for starring in multiple action movies beginning in the 80's. His last known acting role was in 2019 when he starred in a video-on-demand film titled "Beyond the Law."

Sexual misconduct allegations have also followed Seagal since the early 90's. Allegations resurfaced in 2017 at the start of the #MeToo movement. Actor Portia de Rossi of "Arrested Development" fame accused Seagal of sexually harassing her during an audition in which he unzipped her pants.

English actor Rachel Grant also came forward and accused Seagal of sexual assault in 2002 when he allegedly disrobed her and pushed her onto a bed during an audition for a film.

182 Russian Staffers Laid Off From U.S. Embassy in Moscow as Part of Kremlin Ban

At the U.S. Embassy in Moscow, 182 local Russian staffers were laid off as part of a ban, with an August 1 deadline, by the Kremlin on mostly all non-American staff working there, the Associated Press reported. The U.S. announced the layoffs Friday as the newest action in a series...

Russia has blocked dozens of Kremlin critics’ websites, most of them about the imprisoned opposition activist Alexei Navalny. According to the decision of the General Prosecutor’s Office in Moscow, a total of 49 pages were blocked in Russia, said the independent organization Roskomswoboda. The organization is committed to free access to the Internet. All pages of Navalny have been blocked, including those in the regions.

From Stalin’s Packard to Putin’s Aurus – it’s the history of Russia told on four wheels. This new exhibited, featuring vintage cars from the Kremlin’s garage, is being staged to mark the 100th anniversary of Russia’s Special-Purpose Museum of Russian Federal Guard Service. “The opening has been launched on the...

(CNN) — To hear Donald Trump tell it, his endorsement is the equivalent to a golden ticket to Congress. "88 and 2 (really 1) in ENDORSEMENTS this election cycle, and @FoxNews was critical," he tweeted in June 2020. "Has anyone ever done so well? I doubt it!" But as is...

CNN’s Lemon doesn’t back down after Trump criticism

NEW YORK (AP) — CNN’s Don Lemon did not back down despite criticism from President Donald Trump, twice labeling presidential remarks as racist while he was moderating Wednesday’s Democratic debate. Lemon, with partners Jake Tapper and Dana Bash, presided over a session with questions designed to highlight differences between the...

Trump’s diminished power is showing at a very bad time

Scott Farkus’s downfall came when his facade of dangerous invincibility crumbled. You remember Scott Farkus. He was the bully in the movie “A Christmas Story” who terrorized the protagonist and his friends as they walked to and from school. He was an oppressive force until the movie’s hero, Ralphie, overwhelmed with frustration, walloped him. The last time we see Farkus, the kids he had bullied are walking away from him, shaking their heads at his sobbing failure and clearly marveling at the fact that they had ever feared him at all.

(CNN) — Donald Trump has set a pretty high bar for himself when it comes to wild rants. And yet, over the weekend in a speech to Turning Point Action in Arizona, he managed to outdo himself. Words -- or at least my words -- can't do it justice. So,...

At times, yesterday's hearing was difficult to watch. The House Select Committee investigating the Jan. 6 attack on the Capitol not only featured new video footage of the insurrectionist riot, it also heard from four officers who described their harrowing ordeal in personal, emotional, and gut-wrenching terms. As the New York Times summarized:

Representative Adam Kinzinger has blasted Fox News host Laura Ingraham as "cold-hearted" after she mocked him for tearing up during the first hearing of the House select committee investigating the January 6 insurrection at the U.S. Capitol. During an emotional hearing on Tuesday, four police officers recalled the violence and...

The single most revealing fact in the new Trump books

The explosive new books about Donald Trump are riddled with insider details about the former president … and it’s partly because he chose to sit down with the authors himself. In the latest episode of The Point, CNN’s Chris Cillizza examines Trump’s obsession with the media and his efforts to control the narrative.

Trump's rough day hints at limits of his power over GOP

WASHINGTON — For someone his political party still can’t quit, Donald Trump sure had a rough day on Tuesday. The House’s Jan. 6 committee heard testimony from the Capitol police who fought with rioters on that day, with excommunicated Republican Reps. Liz Cheney, R-Wyo., and Adam Kinzinger, R-Il., taking starring roles on the committee.

Rep. Byron Donalds, R-Fla., had a combative exchange with CNN anchor Chris Cuomo, who attempted to lecture the lawmaker about the coronavirus vaccine. Cuomo kicked off the segment on Monday night by hyping Donalds' home state of Florida as the "epicenter" of the current surge of the Delta variant, continuing his constant negative coverage of the Sunshine State's response to the virus in an attempt to deflect from his brother, Democratic New York Gov. Andrew Cuomo, who has been intensely scrutinized in recent months over his handling of the virus.

Pulitzer-winning reporter Carol Leonnig on new Trump book: "I Alone Can Fix It"

"I Alone Can Fix It," a new book by co-authors Carol Leonnig and Philip Rucker, details the chaotic final year of Donald Trump's presidency, including the failed security response at the U.S. Capitol during the January 6 insurrection. Leonnig, a Pulitzer prize-winning Washington Post reporter, joins CBSN's "Red and Blue" host Elaine Quijano with the details. They also discuss her March interview with the former president at Mar-a-Lago, in which Mr. Trump described the rioters as a "loving crowd."

CNN's Jim Acosta called out Fox News in a segment on Sunday, saying the network's viewers must have "whiplash" over its mixed messaging about the coronavirus vaccine. "If you're watching COVID coverage on Fox News these days you may have come down with a case of whiplash," Acosta said in a segment on CNN Newsroom. "Some anchors like Tucker Carlson are spreading anti-vax hysteria, while others like Sean Hannity are finally dealing with the reality that vaccines are saving lives."