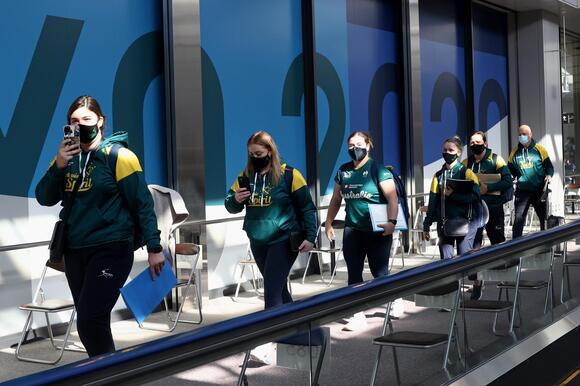 TOKYO (AP) — Australia’s Olympic softball squad touched down in Japan on Tuesday and was among the earliest arrivals for the Tokyo Games.

The so-called Aussie Spirit will be in camp in Ota City, north of Tokyo, and will narrow the squad down from 23 to 15 ahead of their opening Olympic game against host Japan on July 21 — two days before the official opening ceremony.

The softball squad arrive at a time of mounting pressure on Japanese organizers, with polls in Japan showing a majority of people want the Olympics delayed again or canceled because of the COVID-19 pandemic.

Fans from abroad have already been barred from attending the Olympics, and there’s increasing speculation that games will be held in empty stadiums.

A state of emergency in Tokyo, Osaka and other prefectures was last week extended until June 20 as COVID-19 cases continue to put the medical system under strain.

Cancellation pressure grows daily on Tokyo organizers and the International Olympic Committee as more questions arise about the risks of bringing 15,000 Olympic and Paralympic athletes from more than 200 countries and territories into Japan.

The IOC says more than 80% of athletes and staff staying in the Olympic Village on Tokyo Bay will be vaccinated. They are expected to remain largely in a bubble at the village and at venues.

Softball Australia chief executive David Pryles said the squad, which hasn’t played international opposition since February 2020, would be taking the “utmost care” in terms of keeping themselves and the public safe.

“All staff and players heading to Japan today are fully vaccinated thanks to the Australian Olympic Committee,” Pryles said. “They’ll also be undergoing stringent testing and checks as soon as they land at the airport and throughout their camp and (the) Olympics.”

Pryles said player movements would be restricted to one level of the team hotel in Ota, which would include meals, meetings and gym work, and the stadium where they’ll play a series of games against local professional teams and two games against Japan’s national team.

“We’re incredibly grateful the people of Ota City and their government for hosting the squad who will respect the restrictions placed upon us,” he said.

Ian Chesterman, the head of Australia’s Olympic contingent, said athletes and officials were “very comfortable” with the precautions being put in place for the Tokyo Games.

“These athletes . . . are committed to not only look after themselves but do the right thing by the Japanese population as well, and be ready for the games,” Chesterman said. “And I think we’re very comfortable with the protocols that have been put in place to manage not only this group of athletes but the Australian team when we get there.”

'Lucky to be part of Olympic bronze medal team'

New Delhi [India], September 14 (ANI) Indian men's hockey team forward Shamsher Singh, who played a crucial role in India's Bronze Medal-winning campaign at the Tokyo Olympics, expressed that he is very fortunate to have had the chance of playing in the biggest sporting event during the nascent stage of his career.
SPORTS・12 DAYS AGO
TownLift

BEIJING, China. — U.S. athletes trying to make the Winter Olympics will have to be fully vaccinated for COVID-19 under a groundbreaking new policy announced Wednesday by the U.S. Olympic and Paralympic Committee. CEO Sarah Hirshland wrote in a letter obtained by The Associated Press that, starting Nov. 1, the USOPC will require staff, athletes […]
NFL・2 DAYS AGO
Aviation Week

Australia’s competition regulator has denied authorization for Qantas Airways and Japan Airlines (JAL) to coordinate flights between Australia and Japan, saying the proposed joint business agreement would make it “very difficult” for other carriers to compete. The Australian Competition and Consumer... Subscription Required. Australian Regulator Blocks Qantas-Japan Airlines Pact is...
WORLD・13 DAYS AGO
The Independent

At a U.N. General Assembly meeting packed with global gloom, Japan s outgoing leader highlighted what he cast as a moment of inspiration: the Tokyo Olympics, controversially held in the middle of the coronavirus pandemic.“While humanity has been faced with immeasurable hardships, the Tokyo 2020 Games proved to be a symbol of global unity among people around the world,” Prime Minister Yoshihide Suga said as he began his speech Thursday.After the Games were delayed from their original 2020 date because of the pandemic, Japan deliberated for months about whether to hold them at all. Suga and the International Olympic...
SPORTS・1 DAY AGO

LAUSANNE, Switzerland (AP) — Olympic teams have been urged to contact the IOC about getting more vaccines ahead of the 2022 Beijing Winter Games. The Games open on Feb. 4 and will be held in the country where the coronavirus outbreak started. The International Olympic Committee first announced a vaccine rollout program with Chinese authorities for athletes and officials in March. Chinese vaccines were bought by the IOC and also made available for delegations heading to the Tokyo Olympics. Pfizer also donated doses of its vaccine for Tokyo. About 100 countries are likely to compete at the Beijing Olympics. There were 205 teams in Tokyo. Vaccination is encouraged but not mandatory.
SPORTS・9 DAYS AGO
Birmingham Star

Tokyo [Japan], September 13 (ANI): The first group of Afghan evacuees has arrived in Japan to take refuge in the island nation. The evacuees were among around 10 Afghans who entered neighbouring Pakistan by land last week, Kyodo News reported. The four were local workers of the Japan International Cooperation...
AFGHANISTAN・13 DAYS AGO
Washington Post

An Olympic swimmer for Australia says she has been hospitalized in Italy with covid-19, adding that “when it comes, it hits very hard.”. Madi Wilson, a member of Australia’s gold medal-winning 4x100 freestyle relay team at the Tokyo Olympics, shared images from her hospital bed, writing on Instagram that she is “double vaccinated” and had followed protocols while in Italy to compete in an International Swimming League competition.
PUBLIC HEALTH・5 DAYS AGO
The Guardian

Australian Olympic swimming gold medallist Madi Wilson says she feels “extremely unlucky” after being admitted to hospital in Europe with Covid-19. Less than two months after standing atop the podium with the 4x100m women’s freestyle team, the 27-year-old has revealed she tested positive while in Italy for an International Swim League event.
SPORTS・6 DAYS AGO

Olympics-Norway rules out mandating vaccines ahead of Beijing Games

STOCKHOLM (Reuters) - Norway, the most successful country in the history of the Winter Olympics, will not follow in the footsteps of the United States and insist that those travelling to the Beijing Games are vaccinated against COVID-19, a representative told Reuters. Sweden and Finland are likely to follow Norway’s...
WORLD・2 DAYS AGO
AOL Corp

The U.S. Olympic and Paralympic Committee will require athletes hoping to compete at the 2022 Winter Olympics to be fully vaccinated against COVID-19 by Dec. 1. USOPC CEO Sarah Hirshland announced the new policy in a letter to stakeholders on Wednesday. The letter and an internal document, both obtained by Yahoo Sports, clarify that the policy also applies to coaches, staffers and "our full Team USA delegation at future Olympic and Paralympic Games."
PUBLIC HEALTH・3 DAYS AGO
Siliconera

Touken Ranbu Musou Will Arrive in Japan in February 2022

The Japanese edition of September 2021 Nintendo Direct revealed the release date for Touken Ranbu Musou. The game will be available in Japan on February 17, 2022. Touken Ranbu Musou is an action game adaptation of Touken Ranbu, a Japanese browser game featuring personifications of famous weapons made in the country. Koei Tecmo is handling the game’s development with two of its brand teams. Omega Force, the team behind the Warriors action games, will work with the otome game team Ruby Party.
VIDEO GAMES・2 DAYS AGO
runningmagazine.ca

Lululemon becomes official outfitter of Team Canada at the Olympics

Lululemon Athletica has been announced as the official clothing outfitter for the Olympics Games until 2028, replacing the Hudson’s Bay Company as the official clothier of Team Canada. This partnership begins in the lead-up to the 2022 Winter Olympic Games in Beijing. The deal means that all members of Team...
SPORTS・2 DAYS AGO
Sportsnaut

The U.S. Olympic and Paralympic Committee is reversing course and requiring all Team USA delegates to be vaccinated for COVID-19
HEALTH・2 DAYS AGO
Press-Republican

LAKE PLACID — Lake Placid got an early Christmas present on Thursday. The trials for the 2022 U.S. Olympic team for Nordic combined and ski jumping are coming to the Olympic Jumping Complex and Mount Van Hoevenberg on Christmas Eve and Christmas Day, the United States Olympic & Paralympic Committee, USA Nordic and the state Olympic Regional Development Authority announced Thursday. The trials, previously held in Park City, Utah, will bring the country’s top athletes to Lake Placid to compete for a spot on Team USA.
LAKE PLACID, NY・2 DAYS AGO
The Independent

The Ironman World Championship will be held outside Hawaii for the first time in four decades because of uncertainty over whether the Big Island will be able to host the triathlon as scheduled in February during the coronavirus pandemic. Competitors will head to St. George, Utah on May 7 instead, West Hawaii Today reported. Organizers plan to bring the contest back to the islands in October 2022. Ironman competitors swim 2.4 miles (3.9 kilometers), ride bikes for 112 miles (180.3 kilometers) and then run a marathon, which goes for 26.2 miles (42.2 kilometers).The first race was held in...
SPORTS・1 DAY AGO
Sportico

In an effort to get more of its membership behind the idea of a biennial World Cup, global soccer’s major governing body, FIFA, invited all of its 211 members to an online summit to take place Sept. 30. Opposition to the proposal has been strong. From fans to associations, scholars to club owners, many in the soccer world have voiced their concern and do not want to change the 91-year status quo of a tournament every four years. The major proponents thus far are a handful of retired players FIFA invited to Qatar for a two-day event earlier this month, and...
UEFA・2 DAYS AGO
The Independent

About 60 players on the men’s professional tennis tour have taken part so far in an anonymous, online survey about LGBTQ issues that ATP CEO Massimo Calvelli calls part of a “broader initiative” to create “an environment for players and staff that is inclusive, that is diverse and that is very safe and welcoming.” “Statistically, it’s a bit unusual that you don’t have players on the ATP Tour that are openly gay. We thought, in today’s world, this is an area that it’s worth taking a proactive approach — and what better way to do that than trying to get...
NFL・1 DAY AGO
NBC 26 WGBA

Saturday at the Ryder Cup: Team USA fans are filled with hope and optimism

Saturday marked another fun-filled day at the Ryder Cup. Thousands of golf fans came out ready to cheer on their respective teams and for many that was Team USA.
GOLF・14 HOURS AGO