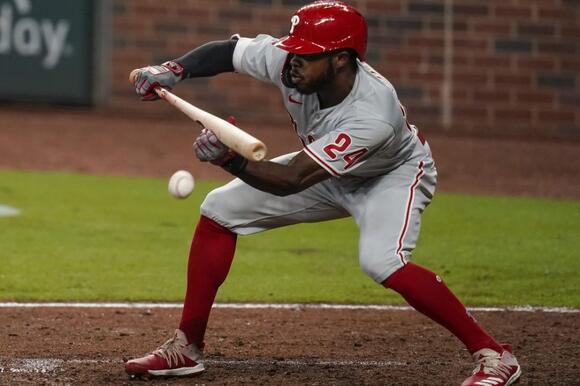 Quinn had to be carried off the field Saturday after sustaining the injury while running the bases in the fifth inning of a 5-3 loss to the Tampa Bay Rays in St. Petersburg, Fla.

The Phillies did not provide an update on the injury or give a timetable for his recovery.

In a corresponding transaction, Philadelphia called up outfielder Travis Jankowski from Triple-A Lehigh Valley to replace Quinn on the 26-man roster. 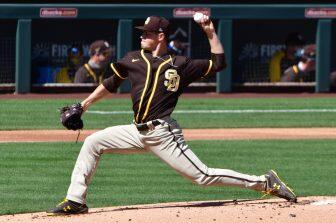 Quinn was on first base when Ronald Torreyes rifled a double to right. Odubel Herrera easily scored from second and Quinn was racing around the bases before suddenly collapsing between third and home.

Quinn got up and took another step with both feet before he hopped on his right foot three times to reach home plate and score the run. He fell to the ground and was in apparent pain while being attended to by a team trainer before being carried off.

The 28-year-old Quinn was activated from the 10-day injured list by the Phillies on Tuesday when outfielder Bryce Harper (wrist) went on the IL. Quinn was on the list with a cut right index finger.

This is the second major Achilles injury Quinn has suffered in his career. He ruptured his right Achilles in workouts following the 2013 season.

“Man I feel for Quinn,” teammate Andrew McCutchen wrote on Twitter. “Im hurt for him knowing how hard this man has been grinding away. He is a game changer. For him to get hurt like that and still finish the play shows how bad he wants it every time hes out there. Heal up bro.”

UPDATE [5:00 p.m.] — Despite the addition of Tyler Anderson to the starting rotation, the Phillies are still in the market for bullpen help. And, according to Jim Salisbury, Craig Kimbrel remains an option, albeit a longshot. The other? Ryan Tepera, who we discussed in more depth below. Stay tuned...

The National League East is about to get weaker, as the Washington Nationals are “finalizing” a deal to send three-time Cy Young Award winner Max Scherzer and All-Star shortstop Trea Turner to the Los Angeles Dodgers, per ESPN‘s Jeff Passan. Bob Nightengale of USA Today notes that once all medical...

Bryce Harper might have sent a signal to the Phillies front office that he wants a Kris Bryant trade to happen before the deadline. As we drift through the calm before the MLB trade deadline storm, teams are having to decide what side of the line they’re going to fall on.

The Minnesota Twins, who are 39-50 this season and 15 games behind the first-place Chicago White Sox in the AL Central, are expected to sell ahead of this month's trade deadline. Oft-injured outfielder Byron Buxton, who will become a free agent after the 2022 season, could reportedly be moved. According...

How to Watch the Atlanta Braves vs. Philadelphia Phillies (7/23/21) - MLB | Channel, Stream, Time

On Friday night, two teams in the middle of the National League East meet again, as the Philadelphia Phillies host the Atlanta Braves in game two of their four-game weekend set. The Braves handled the Phillies in game one of the series on Thursday, winning by a final score of...

The Phillies have reinstated starting pitcher Aaron Nola from the injured list to start this evening’s game against the Yankees. Rotation mate Zach Eflin landed on the 10-day IL with patellar tendinitis in his right knee in a corresponding move. Nola landed on the COVID-19 IL on July 11 as...

NEW YORK -- Phillies right-hander Zach Eflin considered the options before the Phillies placed him on the 10-day injured list on Tuesday with patellar tendinitis in his right knee. “Should I kind of push through it the next 13-14 starts?” he said at Yankee Stadium. “Or try to nip it...

The COVID-19 issues are beginning to pile up for the Phillies. The team announced Tuesday before the first of two road matchups against the New York Yankees that relief pitchers Bailey Falter and JD Hammer were placed on the COVID-19 injured list. Mickey Moniak and Mauricio Llovera were recalled from Triple-A Lehigh Valley in a corresponding move.

"Tough night for us," Harper said, "but I thought we battled the best we could throughout the game and never gave up."

The Phillies placed another player, outfielder Travis Jankowski, on the COVID-related injured list Sunday morning. They also optioned left-handed pitcher Cristopher Sanchez to Triple A. Replacing them on the Phils’ active roster are right-hander Chase Anderson and outfielder Mickey Moniak. Anderson had been on the COVID-related IL since early June...

Moore expected to start for the Phillies against the Nationals

The Washington Nationals (45-54) will battle the Philadelphia Phillies (50-49) in Game 2 of a four-game showdown at Citizens Bank Park in Philadelphia on Tuesday, July 27, 2021, at 7:05 PM ET. Washington will try to bounce back after a one-run loss to the Philadelphia Phillies in Game 1 of a series at 5-6 on Monday. The Nationals took an early 4-0 lead after the 4th frame but ended up scoring an additional of just one run with 10 base hits for the rest of the remaining innings heading to a 5-6 defeat. Starter Joe Ross pitched for 5.0 scoreless innings with three hits and two walks allowed while striking out four Philadelphia batters in the losing effort. First Baseman Josh Bell earned two RBIs on one hit with a walk while 3rd Baseman Josh Harrison and Left Fielder Gerardo Parra added one run on one hit with an RBI each. Second Baseman Alcides Escobar made two runs on two base hits in the loss.

Odubel Herrera out of Phillies' lineup versus Nationals

Philadelphia Phillies outfielder Odubel Herrera is not in the starting lineup for Wednesday's game against left-hander Patrick Corbin and the Washington Nationals. Herrera appears to be getting a routine breather following three consecutive starts. Luke Williams is replacing Herrera in center field and hitting eighth on Wednesday. numberFire’s models project...

Wheeler expected to start for Philadelphia against Washington

The Philadelphia Phillies had reached an agreement to acquire veteran left-handed starter Tyler Anderson from the Pittsburgh Pirates, Jon Heyman of MLB Network reports. Two prospects -- right-hander Cristian Hernandez and catcher Abrahan Gutierrez -- were heading to Pittsburgh in the deal, though the trade has hit a snag, per Heyman.