Award-winning communications strategist. Join me in taking a closer look at meaningful and everyday topics.

Taix Restaurant in Echo Park could be replaced, conservationists want the city to protect its building

Posted by
Josue Torres
20 days ago 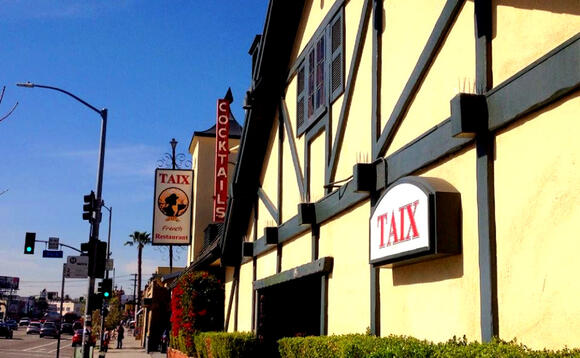 Taix French Restaurant has been an Echo Park staple for decades, serving drinks and country French food to generations at birthday parties, meetings, and reunions after Dodgers games.

Now, real estate developers are developing a project on its Sunset Boulevard location that would replace its current structure with a six-story tower that would feature residences and retail. According to Holland Partner Group, the new property would feature a smaller replica of the restaurant, called New Taix by its owner.

The move has sparked a discussion over whether Los Angeles should strive to conserve the structure that has housed Taix for decades — or if doing so would threaten the valued company itself.

The tug of the battle for Taix has put historic preservationists and lifelong patrons of the restaurant against the eatery’s owner and the developers who seek to renovate it.

In recent weeks, it has drawn a divisive proposal from Councilman Mitch O’Farrell, which has concerned opponents who fear it would undermine L.A.’s whole historic preservation system.

Historic preservationists have urged the city to legally identify the Taix building as a landmark and maybe include the structure in the new development.

Angelenos have called into municipal hearings to ask that the building be protected, citing fond memories made in its bar, booths, and function spaces.

However, the restaurant owner claims that conserving the structure would harm his business.

Michael Taix, a proponent of the redevelopment proposal, told members of the Cultural Heritage Commission that restaurant profits could not cover the overhead at “our mega-sized, grossly energy-inefficient, outdated building.”

He said that the “New Taix” will keep its cherished vibe by adding patinaed mirrors and a faux-tin ceiling, as well as reusing its cherrywood bar and existing “Cocktails” sign. He urged that the city should identify the “site” as historically important rather than the structure.

The Echo Park Improvement Assn. argued in a letter that designating the building as a historic landmark would complicate the rebuilding process and jeopardize Taix’s future.

Under Los Angeles municipal standards, historic structures may still be changed and even demolished, but the restrictions allow for additional scrutiny before that happens.

Preservationists believed that the Taix building may still be saved and included in the new project.

O’Farrell, who represents the region, has requested that the restaurant site be designated as a monument, but not the structure itself.

Preservationists were not happy with O’Farrell’s proposal, which they argued would harm not just the legendary restaurant but also the whole system of historic protection in Los Angeles.

Fine said that a “neutered” kind of historic preservation might enable developers to avoid the more extensive environmental evaluation necessary when removing a historic monument.

Holland Partner Group, which is building a 74-foot-tall building at the Echo Park site that would feature 170 additional housing units and include the new version of Taix, said it would be allowed to proceed with its plans under the O’Farrell proposal.

Ken Bernstein, the director of L.A.’s historic preservation office, confirmed that the commission proposal had been submitted for the building.

The parallel to the Farmers Market was rejected by Fine. Back then, the council had restricted the breadth of its classification, but not to the point where it was just architectural salvage affixed to a new construction, according to Fine.

According to municipal records, Holland spent more than $170,000 last year lobbying local agencies and authorities over its Sunset Boulevard proposal. The council is expected to vote on the landmarking of Taix this week.

The fight over the preservation of the Echo Park restaurant is one that Los Angeles has often faced when treasured enterprises stand in the line of new construction.

Even if a structure is designated as a monument, the city cannot compel a specific company to continue operations, prompting fears that historic preservation may wind up conserving an empty shell.

Residents banded together two years ago to defend Tom Bergin’s, an Irish pub on Fairfax Avenue, from demolition.

The city eventually named the building a landmark but omitted its parking lot so that new construction could be built more readily around it, a decision that bar owners argued would safeguard the survival of their company.

A Norms restaurant on La Cienega Boulevard and the shuttered Johnie’s Coffee Shop on Wilshire Boulevard have both been designated as landmarks in Los Angeles.

However, preservationists backed down from a proposal to transform a former warehouse for the bar Circus Disco into a monument; instead, developers of a new building on the Hollywood site agreed to conserve the fantastical entrance and other antiquities.

As the idea to commemorate Taix — but not its structure — proceeds to a council vote, supporters of the long-running haunt who had pushed for it to be designated a monument say they are opposed to O’Farrell’s altered version of the nomination.

Award-winning communications strategist. Join me in taking a closer look at meaningful and everyday topics.

Southern California’s largest water provider has elected a new general manager, but the decision isn’t final, and the hotly fought vote is revealing deep divisions inside the powerful agency as the area suffers from a severe drought.

Topanga Canyon was evacuated Saturday due to a wildfire raging through the parched scrub of the Santa Monica Mountains. Residents east of Topanga Canyon Boulevard between Topanga Community Center and Viewridge Road, as well as those north of Entrada Road, south of Oakwood Drive, and east of Henry Ridge Mountain Way were ordered to evacuate by the Los Angeles Fire Department.

According to recent statistics, Black residents of Los Angeles County are now at the greatest risk of coronavirus infection, COVID-19 hospitalizations, and mortality of any racial or ethnic group.

Bay Area city will decide if $10.3 million go to the police or social services

In a month, the size and organization of the East Bay police department might change as Richmond embarks on a risky experiment that other towns have tried in the aftermath of George Floyd’s murder in May 2020.