Posted by
Brandon Wang
13 days ago 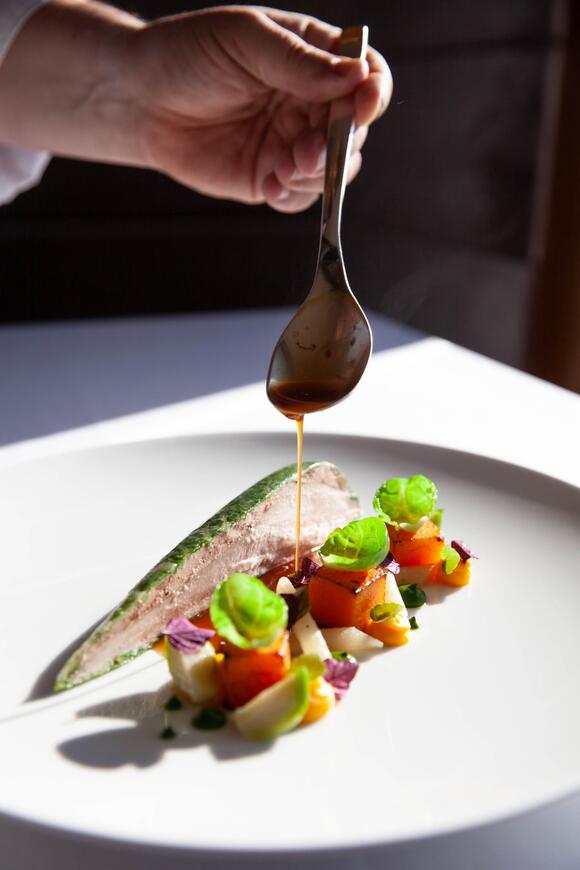 Many of these restauarants have been Michelin Star holders in the past but here are the three new additions to the list this year.

Ever is Chef Curtis Duffy's new restaurant and in it, Chef Duffy brings a stunny experience that aims to crush through old boundaries and adventure in brand new frontiers in the culinary space. Chef Duffy is one of the legends in the Chicago restaurant scene with his previous restaurant Grace which prior to 2015 had been awarded the full three Michelin Stars but unfortunately had to close down in December of 2017. In all of Chicago, both Grace and Alinea have been the only restaurants to have ever been ranked with three Michelin Stars. From Chef Duffy's leave from Grace he once again teamed up with his business partner Michael Muser to now open Ever and once again aim for the elusive three Michelin Star rating. This year it is not suprising that Ever has been included in the 2021 Michelin Guide and awarded Michelin Stars but unfortunately has only recieved two Michelin Stars this year. Despite not attaining the full three Michelin Stars, Ever still manages to deliver a truly impeccable dining experience with inspirations from "Charlie and the Chocolate Factory" and "Pure Imagination".

Ever can be found located in Fulton Market at 1340 W Fulton St.

Moody Tongue was one of the most anticipated restaurants back in 2019 with its grand opening of both the Bar and the Dining Room. The establishment itself is part of the culinary world that brings a dining experience with a heavy emphasis on beer. Moody Tongue is first and foremost a brewery but aims to bring brewpub food elevated to levels never before attempted. In order to do this, the brewmaster Jared Rouben teamed up with his cousin and business partner Jeremy Cohn in order to curate an explosive twelve course tasting menu with seasonal ingredients that can fight toe to toe with any other fine dining experience in the city. The most impressive part is that despire the elevation to fine dining, the true essence of brewpub food is not lost at all within the experience. In 2021, Moody Tongue was awarded two Michelin Stars.

Moody Tongue can be found located at 2515 S Wabash Ave.

Porto is the third new addition to the Michelin Guide in Chicago this year and was awarded one Michelin Star. Porto specializes in cuisine from various regions of Galicia, Spain and Portugal. The highlight at Porto is definitely seafood and is exactly what owner Dani Alonso and chef Marcos Campos are aiming for. All the seafood is sourced directly from Galicia and are offered in both a well curated tasting menu or a la carte and all paired with a perfect choice of Spanish or Portuguese wines.

Porto can be found located at 1600 W Chicago Ave.

Where to Find Delicious Japanese Sandwiches in Chicago

Japanese food is everywhere around America and it is actually pretty rare to go to a city without at least a few decent Japanese restaurants. Despite the number of Japanese restaurants, one specific part of Japanese cuisine that is missing are all the sandwiches that Japan is well known for. If you are looking for sushi or ramen, you probably already know a few places or have a favorite establishment already. On the other hand, if you are looking for a restaurant that specializes in japanese sandwiches, you will probably have a much harder time finding quality establishments.

The Italian Beef sandwich is one of Chicago's most iconic sandwiches consisting of juicy roast beef with giardiniera peppers and delivered au jus right on top of a chewy French roll of bread. It can be commonly orded "wet" in many establishments which means that the sandwich will get dipped additionally in the same juice that the beef is cooked in and submerged in sweet juicy deliciousness.

In America, one of the county's most iconic foods is the hot dog. Hot dogs can be found anywhere from backyard barbeques to kids' birthday parties. In Chicago, one of the city's most famous foods is the iconic Chicago hot dog which elevates the classic hot dog to even tastier levels. Traditionally, a Chicago hot dog includes a snappy hot dog, poppy seed bun, and a whole plethora of toppings. The toppings never include ketchup but instead are yellow mustard, sweet green pickle relish, onion, tomato slices or wedges, a pickle spear, sport peppers, and celery salt.

SEATTLE, Wash. (May 27, 2021) – Michelin Star Chef and Restaurateur Michael Mina has announced his newest Bourbon Steak restaurant will officially open in downtown Seattle this fall. Bourbon Steak is a legacy brand for the acclaimed MINA group, with seven award winning locations across the country. A modern American...

Around the Midwest, bubble tea or boba shops have not been all that common but the trending popularity of these sweet drinks has since been the catalyst for countless bubble tea shops popping up around Chicago. These drinks vary from very traditional milk tea and tapioca pearls to fruit smoothies with flavored, popping boba. Bubble tea can come in all sorts of flavors and colors and there is something for everyone. For those around Chicago looking for a new bubble tea spot, here are a few great locations to check out.

New Bar Vivant menu, and conservas from a Michelin Guide chef and more!

While the indoor bar remains closed due to COVID restrictions (please have patience!), we have expanded our savory tapas offerings available in the Pix-O-Matic and for special order. Pick up a Spur of the Moment Picnic and our complete Tapas Happy Hour Spread 7 days a week. We’ve also added some new rare conservas from Michelin Guide chef Abel Alvarez, who grills all his seafood over an open fire before packing them in top-quality Castillo de Canena Arbequina olive oil.

A new pop-up restaurant is set to open in Ramsgate this summer, launched by a chef with experience in some of the UK's best kitchens. Named Hearth, the restaurant will be a semi-permanent fixture in Thanet, with the official location yet to be released. It is set to offer a...

James Knappett: The Michelin-starred chef bringing the art of foraging to Fitzrovia

James Knappett wants to talk about foraging. It is something he takes great joy from: a way to tie people to the land, but also to the seasons – to time and to place. But he didn’t discover what a great bounty the UK had until he spent two years at one of the best restaurants in the world, Noma. He is very clear: pick what you need, pick what’s delicious, and pick only what you know – after all, there also some dangerous things out there. Soon after you start, he says, you’ll get the bug; you’ll never be...

Some Chicago restaurants now have separated 'unvaccinated' and 'vaccinated-only' sections

(Meredith) -- Chicago restaurants are opening under new city guidance that allows them to have vaccinated-only sections. If patrons are vaccinated, there are no restrictions for them, but the unvaccinated customers will continue to have distanced tables and partitions. In one example, Moe’s Cantina has an “unvaccinated” section to the...

Even if earning a Michelin star can be stressful for some chefs, it's a form of recognition that many hope to achieve. Restaurants that earn and maintain a Michelin star become quite rightly distinguished within the culinary world. So when Mashed caught up with Australian chef Curtis Stone for an exclusive interview, we had to know what it was like when he was awarded his first Michelin star.

CauldronSisterss (Ratika and Riccha) are the sister duo, who’ve captured the field of food consultancy and culinary arts in the city of Jaipur. Not only on the local grounds but they have also established quite a recognized identity, among many master chefs, both nationally and internationally. One such story of immense honor and appreciation for these two leading ladies is their meeting with The Michelin Star Chef Steve Litke.

We, the Culture Whisper team, have eaten our way around three of London's newest gastronomic ventures and here we bring you our verdict. From healthy Asian plates at HUŎ to dishes worthy of appeasing the Greek Gods at INO, here are the hottest tables to book this week. INO, Soho.

From Burger King to Top Chef: How A Self-Taught Chef Worked His Way Up Through Michelin Star Restaurants

From new technologies and changing food trends to supply chains and innovative concepts, the restaurant industry is everchanging. Host Andre Natera shares kitchens, plates and stories with food and beverage superstars, preparing a new dish and offering valuable insights from the front lines of the culinary industry. On this episode...

Fans of Chicago-style pizza only need to travel as far as Rushmore Crossing to satisfy their craving. Old Chicago Pizza + Taproom opened its first South Dakota location in Rapid City this week. The restaurant chain remodeled the former Famous Dave’s location inside and out, adding a patio and water...

The Dish: 'This Is Us' star drops by Greenwich restaurant - twice

Scene… “This is Us” star Justin Hartley and his wife, Sofia Pernas, his former co-star on “The Young and the Restless,” were seen at Eastend restaurant on Greenwich Avenue on May 27, eating dinner and chatting with Sal LoBalbo of LoBalbo Auto Body in Stamford. Hartley, who is in the area to film “The Noel Diary” for Netflix, was also seen there on Thursday night. Netflix is also making “The Good Nurse” in the area with actors Jessica Chastain and Eddie Redmayne.

Alright, folks, June is here and we’re ready to share some new restaurants to try in Vancouver this month. Between the warmer weather, the return of patio dining, and a serious number of newcomers, the problem won’t be picking which to visit. Instead, it’ll be finding the time to visit them all! Honestly, we’re happy about it.

Throughout the past year, the pandemic has hit the city pretty hard and the restaurant and hospitality industry took the brunt of the blow. With many restaurants struggling to adapt and find both workers and diners, there have been a large number of shutdowns during the pandemic. Sunda had been one of these establishments that had chosen to close their doors due to the difficulties of operating during this past year. Fortunately, Sunda has officially re-opened in the past weeks and is attempting to rise up greater than ever. For those that have never been to Sunda, there is no better time to visit than now.

MICHELIN Star chef Tom Kitchin is backing a charity’s nationwide campaign for tartan tea parties. Chest Heart & Stroke Scotland (CHSS) is encouraging people to celebrate Thank You Day on July 4 by joining neighbours, friends and family to say ‘thank you’ to those who helped local communities get through the coronavirus pandemic.