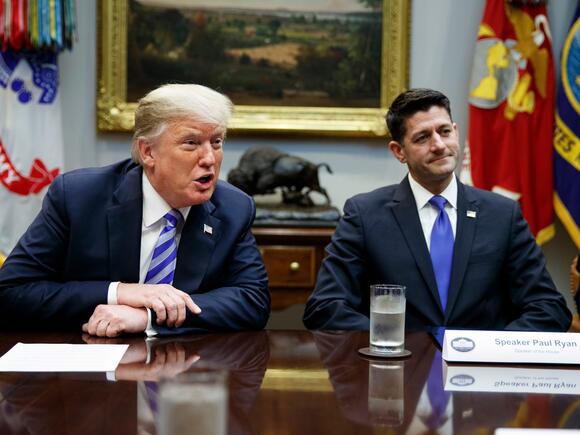 Though Ryan did not mention Trump by name, he gave a thinly veiled criticism of the former commander-in-chief, saying it was "horrifying" to see his presidency come to a "dishonorable and disgraceful end," alluding to Trump's 2020 election loss, refusal to concede, and role in the Capitol insurrection on January 6.

"2020 left Republicans powerless in Washington," Ryan said Thursday at the Ronald Reagan Presidential Library in California. "Once again, we conservatives find ourselves at a crossroads. And here's the reality that we have to face: if the conservative cause depends on the populist appeal of one personality, or on second-rate imitations, then we're not going anywhere."

Ryan also jabbed at elected Republicans who have continued to stick by the former president since he left the White House.

Voters "will not be impressed by the sight of yes-men and flatterers flocking to Mar-a-Lago," Ryan said, referring to Trump's resort in West Palm Beach, Florida. Several GOP officials have visited Trump at his club over the past few months, including House Minority Leader Kevin McCarthy, to muster up support and discuss strategy going into the 2022 midterm elections.

Ryan becomes the latest high-profile conservative to join the anti-Trump camp. But the Wisconsin Republican, who's been out of office for two years, appears to be out of step with the majority of his party.

According to a Quinnipiac University poll released this week , most Republicans - 85% - do want to see GOP candidates who agree with Trump run for office.

Congressional Republicans have refused to move past Trump. Earlier this month, House GOP members kicked Rep. Liz Cheney of Wyoming out of her leadership position after she repeatedly criticized Trump and pushed back on his lies about the 2020 presidential election.

Trump on Friday morning fired back at Ryan, calling him "a curse to the Republican Party."

"He has no clue as to what needs to be done for our Country, was a weak and ineffective leader, and spends all of his time fighting Republicans as opposed to Democrats who are destroying our Country," Trump said in a statement through his leadership political action committee.

House Minority Leader Kevin McCarthy joked at a Saturday night event that it "will be hard not to hit" House Speaker Nancy Pelosi with the speaker's gavel if Republicans take control of the chamber in the 2022 midterms and he becomes speaker.

Our brother Paul Gosar backed Trump's lie and betrayed America. Has he no shame?

In 1954, the Boston lawyer Joseph Welch famously asked Wisconsin Republican Sen. Joseph McCarthy, “At long last, sir, have you left no sense of decency?” It was a question that marked the beginning of the end for McCarthy’s madness, and the senator died a disgraced and despised opportunist. We are...

Will Trump be spoiler as California GOP seeks Newsom recall?

CNN — A sitting president of the United States is usually the person who drives political conversation. Former presidents tend to be an afterthought. But even as we stand more than six months into Joe Biden’s administration, the President is fighting for attention with his predecessor, Donald Trump, to a degree not seen in recent history. The impact of this dynamic could upend expectations about the midterm elections.

Rep. Adam Kinzinger, one of the GOP members of the House's January 6 committee, leaned into the idea Rep. Kevin McCarthy may be subpoenaed.

As many Republicans try to rewrite history of Jan. 6 attack, Sen. Ron Johnson suggests FBI knew more than it has said

A Republican senator suggested in a private conversation Saturday, without evidence, that the FBI knew more about the planning before the Jan. 6 Capitol riot than it has revealed so far, according to a video obtained by The Washington Post. The comments from Sen. Ron Johnson, R-Wis., made after a...

WASHINGTON (AP) — Conservative lawmakers made a push Thursday to boot Republican Reps. Liz Cheney and Adam Kinzinger out of the House GOP because the two defied party leaders and joined the chamber’s special committee investigating the Jan. 6 Capitol attack by supporters of then-President Donald Trump. The effort by...

Former White House chief of staff Mark Meadows has said former President Donald Trump's endorsement is still powerful despite the recent defeat of a House candidate he publicly supported. Meadows, who was Trump's chief of staff between 2020 and 2021, spoke to Newsmax' Cortes & Pellegrino on Friday about the...

CLEVELAND, Ohio -- Tuesday the House Jan 6 Select Committee held their first hearing since subversive Trumplican Rep. Jim Jordan was rejected as a member of the Committee in part because he may be a material witness subpoenaed to testify before it. The Committee heard from four Washington D.C. Metropolitan...