By Christian Datoc
Posted by
WashingtonExaminer
2021-05-28 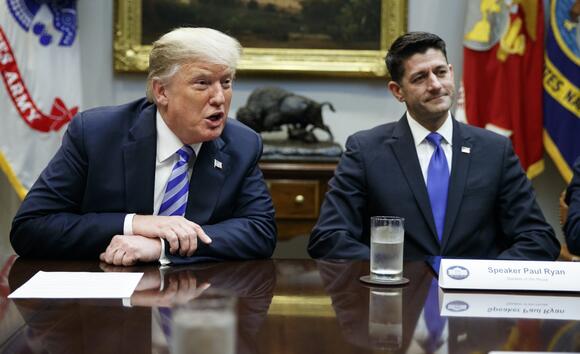 Former President Donald Trump on Friday launched a string of criticisms at Paul Ryan after the former House Speaker urged Republican voters to move the party away from the 45th president.

Ryan, speaking at the Ronald Reagan Presidential Library in Simi Valley, California, claimed the Republican party is at a "crossroads" but avoided talking about Trump by name.

RYAN PUSHES GOP AWAY FROM TRUMP IN SPEECH AT REAGAN LIBRARY

"We win majorities by directing our loyalty and respect to voters, and by staying faithful to the conservative principles that unite us," he continued. "This was true even when the person leading our movement was as impressive, polished and agreeable as they come."

Trump responded in a Friday statement by claiming Ryan "became a lame duck Speaker of the House, lost all vote-getting capability with the people he represented in Wisconsin, and was the single biggest factor, other than Romney himself, for the monumental Romney/Ryan loss in the Presidential race of 2012."

"Ryan should instead be telling them how to stop the cheating of elections and that we would have won if Republican leadership fought the way the Democrats did," the former president continued.

Trump additionally claimed that "the day" Ryan joined the Fox Corporation board, "Fox totally lost its way and became a much different place, with millions of its greatest supporters fleeing for good."

"Ryan has been a curse to the Republican Party. He has no clue as to what needs to be done for our Country, was a weak and ineffective leader, and spends all of his time fighting Republicans as opposed to Democrats who are destroying our Country," he closed. "As a Republican, having Paul Ryan on your side almost guarantees a loss, for both you, the Party, and America itself!"

The committee behind Republican Sen. Rand Paul's 2016 presidential campaign was fined $21,000 by the Federal Election Commission for mishandling financial contributions, according to a new report.

This week, Senate Republicans earnestly fought to save a massive $1.2 trillion infrastructure deal, worried that if it fell through, they’d be labeled the “party of no” by the media and be blamed by their constituents for not working to repair the broken roads, bridges and buildings in their respective hometowns.

House Minority Leader Kevin McCarthy sidestepped a question about whether he still thinks former President Donald Trump bears responsibility for the Jan. 6 attack on the Capitol, saying that information he learned since then backs up his pivoting to place blame on House Speaker Nancy Pelosi for security failures that day.

As Trump Seeks Republican to Take Down Cheney, Poll Shows Darin Smith Could Be a Winner

Former President Donald Trump's strategy to oust Representative Liz Cheney from office is to rally Republicans around one candidate. It's possible that person will be Darin Smith, a businessman from Cheyenne. Cheney's been on the receiving end of Trump's ire since the Capitol riot, where she laid the blame at...

Former President Donald Trump rebuked Senate Minority Leader Mitch McConnell on Thursday for helping advance the White House’s $1.2 trillion infrastructure package. Mr. Trump, who many still view as the leader of the Republican Party, said Mr. McConnell’s support for the deal was just the latest example of how the Kentucky Republican “doesn’t fight” for his party.

Republicans could use the Biden administration’s recent shift back to recommending masks in some indoor settings as an opportunity to paint their party’s coronavirus messaging as more firmly rooted in science than the Democrats’.

Former Rep. Mark Walker lashed out at the Club for Growth and suggested that former President Donald Trump was misled into endorsing his rival for the Republican Senate nomination in North Carolina during an interview with the Washington Examiner.

(Philadelphia) — Craig Snyder thinks the numbers in next year’s Republican Senate primary in Pennsylvania are in his favor. The 60-year-old Philadelphian announced Wednesday that he’s joining the GOP field with a radically different approach than any other major candidate thus far: He’s not trying to win votes from die-hard supporters of President Donald Trump.