Trump fires back at Paul Ryan: 'Curse to the Republican Party' 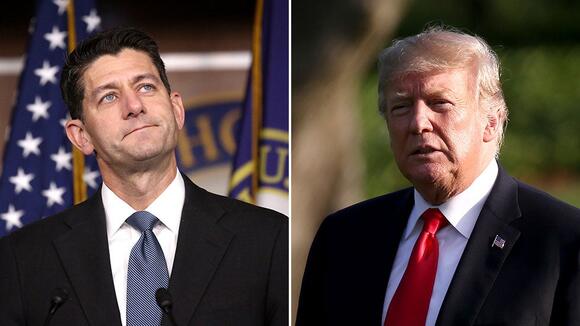 Former President Trump on Friday fired back at former House Speaker Paul Ryan (R-Wis.) after a speech in which Ryan criticized Trump’s continued grip on the Republican Party.

In a statement issued through his leadership political action committee Save America, Trump hammered Ryan as a “RINO” — Republican in name only — and blamed him and Sen. Mitt Romney (R-Utah), the GOP’s 2012 presidential nominee, for costing Republicans the White House nearly a decade ago.

“Paul Ryan has been a curse to the Republican Party,” Trump said. “He has no clue as to what needs to be done for our Country, was a weak and ineffective leader, and spends all of his time fighting Republicans as opposed to Democrats who are destroying our Country.”

Trump returned fire a day after Ryan delivered a speech at the Ronald Reagan Presidential Library in Simi Valley, Calif., warning of the political perils facing the Republican Party if it continues on its current trajectory.

“If the conservative cause depends on the populist appeal of one personality, or on second-rate imitations, then we’re not going anywhere,” Ryan said in a clear reference to Trump.

During his speech, Ryan did not criticize Trump by name, although he left no doubts as to whom he was referring to. At one point, he said that GOP voters would “not be impressed by the sight of yes-men and flatterers flocking to Mar-a-Lago,” the former president’s private club in Palm Beach, Fla.

It wasn’t the first time Ryan has found himself at odds with Trump and his most ardent supporters. He was sharply critical of Republican efforts earlier this year to challenge President Biden ’s Electoral College victory, calling the objections “anti-democratic and anti-conservative.”

Ryan’s latest remarks, however, come amid a fierce debate within the GOP over its direction in the post-Trump political environment. While most Republican officials and candidates continue to publicly align themselves with Trump, a vocal segment of the party has criticized that strategy, warning that fealty to the former president will cost the GOP long-term political success.

One such critic, Rep. Liz Cheney (R-Wyo.), was expelled from her role as the No. 3 House Republican this month for condemning Trump’s continued and baseless claim that the 2020 election had been stolen from him.

Still, Trump and his allies have cast adherence to his conservative brand of populism as the GOP’s best chance at victory. In his statement on Friday, the former president warned that Ryan and those like him would only bring down the Republican Party.

“As a Republican, having Paul Ryan on your side almost guarantees a loss, for both you, the Party, and America itself,” he said.

Republicans on Friday accused the Biden Justice Department of partisanship in ruling that the Treasury Department must turn over former President Trump’s tax returns to Congress, while the Biden official who authored the ruling has gone out of her way previously to taunt Mr. Trump publicly. Rep. Kevin Brady of...

As Trump Seeks Republican to Take Down Cheney, Poll Shows Darin Smith Could Be a Winner

Former President Donald Trump's strategy to oust Representative Liz Cheney from office is to rally Republicans around one candidate. It's possible that person will be Darin Smith, a businessman from Cheyenne. Cheney's been on the receiving end of Trump's ire since the Capitol riot, where she laid the blame at...

What Trump got right

Donald Trump will not be remembered by most Americans as a great president. An informal survey of historians this summer ranked him as the fourth-worst chief executive, ahead of only Franklin Pierce, Andrew Johnson and James Buchanan. He lost the popular vote in both the election he won and the election he lost. He was the first president to be impeached twice, as well as the first to be impeached after he left office. And by the time his supporters had finished storming the Capitol in a furious attempt to prevent Congress from certifying Joe Biden’s victory in January, only 38 percent of Americans approved of the job Trump did — with 52 percent “strongly” disapproving.

Trump’s diminished power is showing at a very bad time

Scott Farkus’s downfall came when his facade of dangerous invincibility crumbled. You remember Scott Farkus. He was the bully in the movie “A Christmas Story” who terrorized the protagonist and his friends as they walked to and from school. He was an oppressive force until the movie’s hero, Ralphie, overwhelmed with frustration, walloped him. The last time we see Farkus, the kids he had bullied are walking away from him, shaking their heads at his sobbing failure and clearly marveling at the fact that they had ever feared him at all.

Republican critics of Donald Trump have raked in campaign cash this year as their votes to impeach the former president and investigate the Jan. 6 Capitol attack have put them in the crosshairs of Trump and his allies. Why it matters: The 2022 midterms won't just determine which party controls...

Former President Trump lambasted Senate Republicans for reaching a deal with their Democratic counterparts on "major issues" involving an infrastructure proposal, dubbing Sen. Mitt Romney (R-Utah) a "SUPER RINO." “Hard to believe our Senate Republicans are dealing with the Radical Left Democrats in making a so-called bipartisan bill on 'infrastructure,'...

Chuck Todd breaks down how Republicans are appeasing former President Trump on the January 6th Capitol attack and the coronavirus. July 28, 2021.

President Biden has proved himself fairly desperate to get a deal with Senate Republicans on infrastructure. Now he appears to have one; and they ought to take yes for an answer. As of this writing, negotiators from the two parties have an agreement on a bipartisan infrastructure framework, or BIF....

WASHINGTON -- House Speaker Nancy Pelosi on Sunday named a second Republican critic of Donald Trump, Rep. Adam Kinzinger, to a special committee investigating the Capitol riot and pledged that the Democratic-majority panel will "get to the truth." Kinzinger said he "humbly accepted" the appointment even as his party's leadership is boycotting the inquiry.

Former President Trump attacked Arizona state Sen. Paul Boyer (R) in his latest broadside against Republicans in the state who are pushing against a partisan election audit. Trump labeled Boyer, who told The Hill in May he was “embarrassed” by the audit after supporting the process, a “RINO,” or Republican In Name Only, and touted his primary challenger.

OAKLAND — The California Republican Party on Saturday created a process that will allow delegates to endorse one of the 24 Republicans running to replace Gov. Gavin Newsom, despite objections from some conservatives who say the party should not back anyone in the race. Party leaders kept the bar for...

Trump is a complication for Republican hopes in Virginia

Former President Trump is threatening to complicate Republican Glenn Youngkin’s bid for governor in Virginia, where the ex-businessman is trying to extend his support to the very suburban voters who fled from Trump in 2020. Youngkin has said he is “honored” to receive Trump’s endorsement, noting the former president “represents...

No notable Republican has declared outright a challenge to President Biden in 2024. But plenty of them are flocking to Iowa — courting activists, establishing political action committees and trotting out their best digs against Democrats — signaling that the GOP presidential primary is already underway. This cycle, however, has...