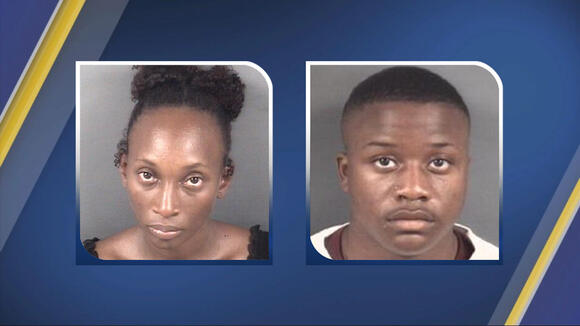 A teen boy and a woman are both behind bars in the shooting death of a 40-year-old man in Fayetteville, authorities said. Laticia Ramon Brown, 28, and Tyliek Saheem Gillespie, 16, were both charged in the death of Eric Robinson, who was shot during a robbery and later died in the hospital on the early morning of April 17 along the 2000 block of Osceola Drive. Both were arrested without incident and are now being held at the Cumberland County Detention Center without bond. Gillespie, of the 100 block of Hill View Street, was charged with first-degree murder and felony conspiracy. The Fayetteville Police Department said he is being tried as an adult due to being previously convicted as an adult in an unrelated case. Brown, of the 5000 block of Starbeam Drive, was also charged with first-degree murder and felony conspiracy. Anyone with information on the case is asked to contact the Fayetteville Police Department at (910) 824-9539 or CrimeStoppers at (910) 483-8477.
View All 13 Comments

Durham police are investigating after a man was shot and killed on Guess Road overnight.

The man linked to at least 22 car thefts in and around Fayetteville is now in custody.

Jarue Malik Alston has been arrested and charged in a June 8 shooting near Wadford Drive in Raleigh.

Smithfield police are investigating after shots were fired into a home overnight, killing a 60-year-old man.

The "armed and dangerous" man that Fayetteville officers have been trying to find the last couple days apparently struck again.

Smithfield police are investigating after shots were fired into a home overnight, leaving one person in critical condition.

The SBI identified the man as 48-year-old Michael Almer Rich of Clinton.

If you spot this man, do not approach him. Call 911 immediately.

A man drowned in Falls Lake on Saturday, according to Wake County Sheriff's Office.

A 19-year-old has been arrested in the deadly shooting of another 19-year-old outside a Raleigh grocery store Monday night.

An investigation is underway after a North Carolina police chief shot a rape suspect Tuesday afternoon, according to the Sampson County Sheriff's Office.

The shooting happened Tuesday at Sam's Circle Mart off Highway 701 in Newton Grove.

An EMS worker was shot at a Juneteenth event in Raleigh.

One person died in an airplane crash in Kinston on Thursday night.

The investigation started when a skull was found near Rock Quarry Road and Old Baucom Road, according to Garner Police Chief Joe Binns.

One person has died after a two-car crash shut down eastbound Interstate 440 on Thursday morning.