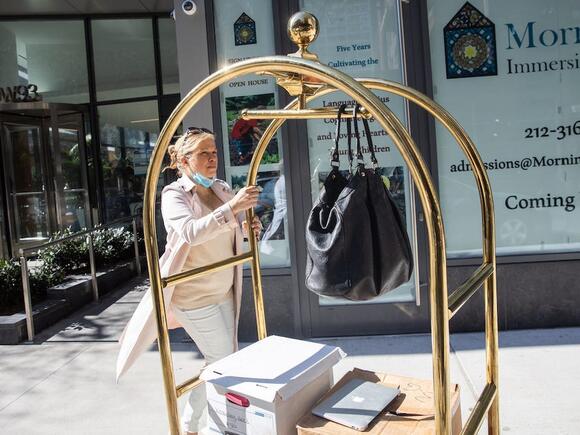 Jennifer Weisselberg, the former daughter-in-law of Trump Organization Chief Financial Officer Allen Weisselberg , told CNN on Thursday that she was being evicted from her apartment because she had agreed to collaborate with prosecutors investigating the Trump Organization.

"Yesterday, I was served to leave my apartment within the next seven days. It's a threat," she said on CNN's "New Day."

"They're kicking me out," she added, telling the show's host she guessed it was because "I'm not wrong about the information I'm giving."

Allen Weisselberg, who has been at the helm of the Trump Organization's finances for four decades and manages the Trump family's personal finances, is a focus of the criminal investigation into the company.

Prosecutors in the Manhattan District Attorney's Office are trying to "flip" him into cooperating and guiding investigators through former President Donald Trump's financial documents, The Washington Post reported in April . They're working in tandem with prosecutors in the New York Attorney General's Office who are overseeing their own criminal inquiry into the Trump Organization's and Trump's personal finances.

Jennifer Weisselberg has said she gave prosecutors information related to her former father-in-law's tax practices as investigators worked to determine whether he, the Trump Organization, and Trump himself engaged in tax evasion or financial fraud . She has been working with prosecutors since the fall, she previously told Insider.

Through her 2018 divorce with Allen Weisselberg's eldest son, Barry, Jennifer Weisselberg came to possess numerous financial documents related to the Trump Organization, she said. She previously told Insider that she'd given seven boxes of documents to prosecutors and that they contained evidence that Allen and Barry Weisselberg committed tax crimes.

Jennifer Weisselberg told CNN that her former father-in-law remained a guarantor on her apartment lease. She said that the eviction was retribution for her cooperation with prosecutors and that she'd tried to speak with Allen Weisselberg about it directly but he ignored her.

"I contacted Allen numerous times last year to try and discuss this privately, gracefully, with dignity, inside the family," she said, adding that she'd even tried to make entreaties through Donald Trump Jr. "I haven't spoken to him since last June," she said.

This article has been updated.

Allen Weisselberg resigned from the top of the Trump Organization. So who’s running the company now?

Earlier this month, Allen Weisselberg — the Trump Organization’s most powerful employee not named “Trump” — resigned his post in the company’s leadership. Weisselberg had been one of two trustees at the trust that owns and controls former president Donald Trump’s company. But Weisselberg gave up that post, and dozens of others at Trump subsidiaries, after he was charged with running a tax-fraud scheme inside the company.

WASHINGTON – A federal judge is giving former President Donald Trump time to challenge a Department of Justice order that said the IRS must surrender his income tax returns to Congress. U.S. District Court Judge for the District of Columbia Trevor McFadden said that Trump and his lawyers have until...

NEW YORK — The chair of former President Donald Trump’s 2017 inaugural committee pleaded not guilty Monday and said he was “100% innocent” of charges that he secretly lobbied the U.S. on behalf of the United Arab Emirates. Tom Barrack, 74, appeared in Brooklyn federal court for the first time,...

Rachel Maddow looks back at how the Trump campaign denied reporting that they had paid actors to fill out the audience at Donald Trump's presidential campaign announcement in 2015, only to confirm, now that Trump is out of office, that the story was true after all. July 20, 2021.

Former President Trump in late December spoke with top Justice Department officials about the 2020 presidential election and told them to "just say the election was corrupt and to leave the rest to me" and Republicans in Congress, according to notes taken by then-acting Deputy Attorney General Richard Donoghue. Donoghue's...

"There’s a duty that counsel has that when you’re submitting a sworn statement . . . that you have reviewed it, that you had done some minimal due diligence.” You might expect to hear that statement in a first-year law school class. Instead, it was made by a federal court judge in Michigan during an extraordinary court session that underscored the irresponsibility of lawyers who sought to overturn the 2020 presidential election. Unlike for former president Donald Trump and other politicians who lie with seeming impunity, there may be real consequences for the lawyers who helped him peddle his spurious claims about election fraud.

Carol Leonnig and Philip Rucker, the authors of "I Alone Can Fix It," tell "Face the Nation" that former President Trump became "emboldened" after his first impeachment trial, and in 2020, that became a crisis that put "all of us at risk and American lives are lost as a result."

Tom Barrack and the influence he had in Trump's world

When Donald Trump accepted the Republican nomination for president in 2016, a little-known businessperson received a prime convention speaking slot just minutes before the nominee: Tom Barrack.

This week the Department of Justice let Rep. Mo Brooks, R-Ala., know it is not going to be his wingman. At least, not in the context of defending him against California Democratic Rep. Eric Swalwell’s lawsuit. Swalwell alleges that Brooks should be held liable for inciting the insurrection in the...

Lara Trump sparked outrage after she said many probably hope US Olympian Gwen Berry doesn’t make it to the podium in the hammer throw because the athlete and activist said she would use the global stage to take a stand for “oppressed people”. Athlete Gwen Berry has said that she would protest the US national anthem on the podium if given the chance. At the US track and field Olympic trials, Ms Berry turned away from the American flag. She advanced to the Olympic final on Sunday after facing calls from conservatives that she be banned from competing for...

Trump to object to release of tax returns - lawyer

(Reuters) - Former U.S. President Donald Trump will challenge a recent U.S. Justice Department order that his tax returns should be turned over to a House of Representatives committee, one of his personal lawyers signaled on Monday. “There is no evidence of any wrongdoing here and I object to the...

Report: Rudy Giuliani Is “Close to Broke,” Prepared to Go to Prison

When we last checked in on Rudy Giuliani, things were not looking so hot for the former federal prosecutor turned Donald Trump attorney turned old man yelling at an empty blender. For starters, he’d recently had his home and office raided by the Feds, who seized nearly a dozen cell phones and computers as part of their criminal probe into his Ukraine dealings. Subsequent to that, he had his law license suspended in both New York and D.C. over the many election lies he’d told, and in one of the many new books out about Trump, it was reported that when it became clear that Trump was probably going to lose, an allegedly inebriated Giuliani “started to cause a commotion...telling other guests that he had come up with a strategy for Trump,” insisting the campaign should “Just say we won,” which it did. Amid all of this, Giuliani didn’t even have his cousin-wife’s shoulder to lean on. And sadly, things continue to look quite to very bleak for the guy who went from “America’s mayor” to “Two weeks away from being thrown out of the Port Authority for disorderly conduct.”

Without evidence, Sen. Ron Johnson (R-WI) claimed the FBI knew more about the Capitol attack before it occurred, according to a new video obtained by the Washington Post.

MyPillow CEO Mike Lindell has said that is losing "about a million dollars a week" since he pulled his ads from the Fox News network. "They're disgusting, what they've done to our country," Lindell said of the network while speaking on War Room, a show on Real America's Voice, a right-leaning media network. The host is hosted by Steve Bannon, former White House Chief Strategist under Republican President Donald Trump.