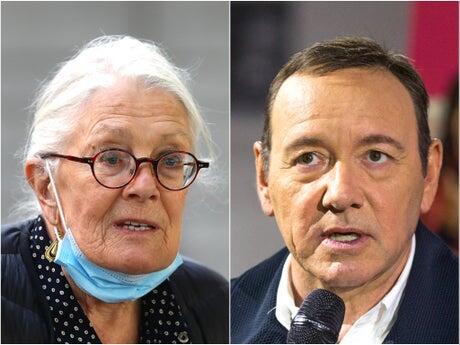 Vanessa Redgrave will not feature in the forthcoming Italian film L'uomo Che Disegnò Dio , which will feature a controversial cameo from Kevin Spacey .

Last Saturday, ABC News claimed that Redgrave would potentially act in the low-budget indie film, which is directed by her husband Franco Nero.

Yesterday, however, a representative for Redgrave denied that she would take part in the project, the title of which translates to The Man Who Drew God in English.

It has been reported that Spacey will play a detective investigating a false claim of paedophilia in the film.

Spacey was accused by at least 20 men of sexual misconduct at London’s Old Vic Theatre between 1995 and 2013. Other allegations against Spacey included a sexual assault claim by the actor Anthony Rapp, who alleged that Spacey assaulted him when he was 14 years old.

Spacey has categorically denied all claims of sexual misconduct, and no charges have been brought against him. The Man Who Drew God will be Spacey’s first acting role in four years.

Speaking to The Hollywood Reporter , Redgrave’s representative said: “Vanessa Redgrave's name is being included in recent stories relating to the casting of the upcoming film, The Man Who Drew God.

“While there have been discussions about the possibility of her joining the cast, she will not appear in the film.”

What Vanessa Huxtable From The Cosby Show Looks Like Today

"The Cosby Show" – following the life of Bill Cosby's Dr. Cliff Huxtable and his family – is one of the most successful sitcoms of all time. Tempestt Bledsoe was the actor who played Vanessa Huxtable, the fourth child of the Huxtable clan, and although she started modeling at a very young age, the wildly popular sitcom was her "first acting audition," as she told The Grio in 2012. Bledsoe looks back fondly on her time as a Huxtable daughter. "We were brought up on a set that is just incomparable as far as what kind of set you would want kids to be on," she told The Grio. "It was the best set in the world." The actor credits Cosby with guiding her during her youth to avoid the pitfalls of being a child star. "Between him and my mom [Willa, a retired teacher], there were no better examples," she told People in 2011. "The focus was always on having a healthy childhood."

Mena Suvari revealed an odd moment she had with actor Kevin Spacey on the set of the 1999 movie "American Beauty." The actress, 42, appeared alongside the 61-year-old actor in the Oscar-winning hit film more than a decade ago. She recently recalled an "unusual experience" she had with the actor on set that she dismissed at the time only to reconsider it as being potentially nefarious in light of his sexual misconduct allegations that came out in 2017.

Kelly Preston’s final film role has been fondly remembered by husband John Travolta, who posted the trailer to Off The Rails on his Instagram. “Off the Rails is Kelly’s last film,” Travolta wrote. “She was very proud of it and of all of the wonderful talent that she got to work with in it.”

John Travolta on late wife Kelly Preston’s last film: ‘She was very proud of it’

John Travolta couldn’t be more supportive of Kelly Preston’s final film which was released in some countries on Friday, according to Travolta. The actor took to Instagram to share a trailer of the movie, “Off the Rails,” to announce the news. It was the last project Preston shot before her...

Wanna see something really scary? According to Hollywood, it’s a woman getting old. That’s one of the unspoken themes of M. Night Shyamalan’s new summer thriller, whose ads feature a pair of female legs relaxing on the seashore. One leg is young and shapely; the other withered and skeletal. The title succinctly names the horror unfolding: “Old.”

Goldie Hawn has never taken herself too seriously. Combining blonde bombshell looks with comedy chops, she’s always embodied fun. And unlike some fellow actors of her generation, her star has never waned. Rising to fame on the NBC comedy show Rowan & Martin’s Laugh-In in the latter half of the ’60s, she quickly became a household name. By 1969, she had scooped an Oscar and a Golden Globe for best supporting actress for her stellar performance in Cactus Flower.

Kate Beckinsale is very close to her only child making her latest update even harder to handle. The British actress, 47, opened up about Lily, who she shares with her ex, The Prodigal Son star, Michael Sheen, during an interview on Live with Kelly and Ryan on Friday. Kate sadly...

Queen Latifah’s public declaration for her partner, Eboni Nichols, and son, Rebel, was one of the highlights of the 2021 BET Awards. The New Jersey native was honored with the lifetime achievement award and she finally addressed her long-questioned sexuality during her acceptance speech. “Eboni, my love,” the rapper turned...

Vanna White Marrying Boyfriend Before She Turns 65, Pat Sajak To Walk Her Down The Aisle?

Is Vanna White finally ready to tie the knot with longtime boyfriend John Donaldson? That’s what one tabloid is reporting this week. Gossip Cop investigates. Vanna White Wants Pat Sajak To Walk Her Down The Aisle?. This week’s edition of the Globe reports iconic letter-turner Vanna White is ready to...

Mom Captures Her Babysitter on Camera and Can't Help Crying

Wow! This teenage babysitter could star in the next Disney movie because of her angelic voice. When the woman she worked for heard her singing to their daughter, she recorded the shy eighteen-year-old and caught the magic on camera. Nicki Maher had been mesmerized by her babysitter's voice for a...

Megan Fox and Machine Gun Kelly are still going strong. In fact, there's been chatter about that the couple is planning to get engaged once Fox's divorce from Brian Austin Green is finalized. While they've been gracing timelines and headlines with their coupledom, Fox has still faced criticism for dating someone younger than her.

Suzzanne Douglas Dies, The Parent 'Hood and Now They See Us Star Was 64

Actress Suzzanne Douglas, star of '90s sitcom The Parent 'Hood and more recently the Netflix mini-series When They See Us, has died at the age of 64. A cousin of the star, Angie Tee, broke the news via Facebook on the 6th of July, announcing the death while also speaking of her admiration of the actress and what she achieved in her career. Tributes have also been paid by fellow stars, directors and authors at her passing. Angie Tee wrote in her original Facebook announcement.

“When They See Us” actress Suzzanne Douglas has died at the age of 64. A cause of death has not been revealed. On Wednesday, Douglas’ cousin Angie Tee broke the sad news on Facebook. She wrote, “Suzzanne Douglas a beautiful and talented actress made her transition today. She warmed our hearts on movie screens and television sets all over the world. This beautiful soul was my cousin.”

Janet Hubert, who is widely known as the original “Aunt Viv” on the NBC’s ’90s sitcom, The Fresh Prince of Bel-Air, is getting a fresh start and joining the cast of a Netflix film called The Perfect Find. The actress currently seems to be on a winning streak, after a...

Hoda Kotb is renowned for her upbeat personality, but the NBC star was in a sombre mood on Tuesday as she announced some sad news live on Today. The mother-of-two told viewers about the sad death of a much-loved member of the Today family. Wrangler, the show's first puppy with...

Actor Toby Kirkup died hours after being discharged from hospital, an inquest has heard. The 48-year-old, whose acting credits include Emmerdale and the hit BBC series Peaky Blinders, died at home after attending Huddersfield Royal Infirmary on 29 August 2020.Yorkshire Live reports that Kirkup sought medical advice after suffering from chest pains and a tingling sensation in his arms. After being diagnosed with gastritis, he was discharged and returned to his home in Slaithwaite. His condition then deteriorated and he began vomiting before suffering a cardiac arrest. A post mortem established his death was the result of natural causes.However, his...

Many celebrities have been urging the public to get the COVID-19 vaccine via social media and in interviews. Even the royals have been vocal about their thoughts on the vaccine. Duchess Kate Middleton shared a photo of herself getting vaccinated along with a simple caption. "Yesterday I received my first dose of the COVID-19 vaccine at London's Science Museum," she wrote in an Instagram post in May. "I'm hugely grateful to everyone who is playing a part in the rollout – thank you for everything you are doing." In turn, Gayle King expressed her relief about getting vaccinated to Stephen Colbert, telling him that the vaccination makes her superhuman. "But now, Stephen, I am vaccinated," said King. "It is my superpower. I am vaccinated," she said. "I'm taking little baby steps [back into the world]."

Country musician Jessie James Decker posted a tearful Instagram Story about the body-shaming she’s been experiencing, telling her followers it “hurts her heart”.The “Flip my Hair” singer said she had seen a Reddit page that “rips her apart on a daily basis” about her weight. She repeated some of the insults she had read that described her appearance as “fat,” “boxy” and “terrible”.“ââIt’s pretty awful, and I cannot believe this is still happening in the world – that people are doing this,” she said.Sounding increasingly upset, Ms Decker said she found the Reddit page “so disgusting,” and added: “I’m...

The relationship between Nicole Kidman and her daughter has been taboo for years, and people wondered whether they weren't on good terms after the actress wasn't invited to her own daughter's wedding in 2015. Isabella Cruise, the 28-year-old adopted daughter of Tom Cruise and Nicole Kidman, tied the knot in...