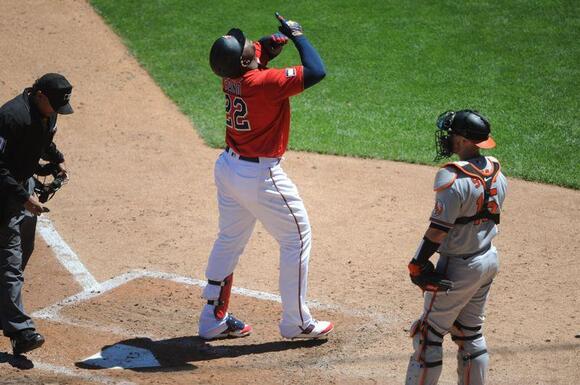 Miguel Sano belted a three-run homer and Michael Pineda tossed six strong innings as the Minnesota Twins completed a three-game sweep of the visiting Baltimore Orioles with a 3-2 victory on Wednesday afternoon in Minneapolis.

Pineda (3-2) gave up only one run on three hits with two walks and eight strikeouts as the Twins extended their winning streak to a season-high four games.

Hansel Robles recorded his third save after allowing a run in the ninth when Maikel Franco’s two-out double scored Trey Mancini, who doubled to begin the inning.

Baltimore has lost nine straight and 16 of its past 18.

Mancini gave the Orioles an early lead with a two-out solo blast in the first off Pineda. Mancini leads Baltimore with 11 homers and 42 RBIs.

Nick Madrigal paced the Chicago attack with his second successive three-hit game. The White Sox stranded 13 and went 0-for-10 with runners in scoring position.

Taylor Ward drove in a career-high five runs to lead Los Angeles to a win against Texas in Anaheim, Calif.

Ward had three hits while Juan Lagares and Jose Rojas each had two hits and two runs scored for Los Angeles, which won its third straight game to match its season high.

James Kaprielian continued to pitch brilliantly as a fill-in starter and Matt Olson clubbed his 13th home run of the season to allow Oakland to salvage one win in its three-game series against visiting Seattle.

Seth Brown continued his hot hitting with a single, a double and two RBIs for the A’s, who had lost three in a row. A former first-round draft choice who was acquired by the A’s from the New York Yankees in a package for Sonny Gray in 2017, Kaprielian (2-0) shut out the Mariners on two hits over a career-high seven innings.

Mainland Regional senior pitcher was expecting to hear his named called in Sunday Major League Baseball draft. With the No. 26 pick in the 2021 draft the Minnesota Twins select Chase Petty. "It's so surreal," Petty told MLB Network in an interview earlier in the week. "I've been dreaming about...

(Photo by Brace Hemmelgarn/Minnesota Twins/Getty Images) The Chicago White Sox and Minnesota Twins just finished their four-game series. The Twins took the fourth game with a big win to split the series 2-2. It was a great series in terms of entertainment. The White Sox had some great moments in the series which is very encouraging. They followed up a beatdown of the Houston Astros with this series so you knew they would be feeling good about themselves.

The Twins need a rest after Sunday's dizzying 12-9 victory over the Detroit Tigers on Jorge Polanco's three-run, 10th-inning homer. They will get it, with four days off for the All-Star break that began after Sunday's careening game. They swept a four-game series from Detroit, with the Twins making a...

MINNEAPOLIS, MN (AP) — Jorge Polanco hit a game-ending three-run homer in the 10th inning, and the Minnesota Twins completed a four-game sweep of the Detroit Tigers with a wild 12-9 victory. Polanco hit a full-count pitch from Derek Holland to left field for his 12th homer of the season.

DETROIT — Pretty electric night at the old ballpark Saturday. The largest crowd since July 24, 2019, a lively 31,624, filled Comerica Park for the second game of a doubleheader against the Twins. The Tigers had eked out a 1-0 win in the first game and the teams battled into extra innings in the nightcap.

Minnesota Twins infielder Miguel Sano is not in the lineup Sunday in the team's game against the Detroit Tigers. Sano is being replaced at first base by Alex Kirilloff against Tigers starter Wily Peralta. In 258 plate appearances this season, Sano has a .196 batting average with a .705 OPS,...

DETROIT — Given that the rest of this misadventure of a Twins season is probably going to be about teaching and learning, about mining success out of the failures of youth, perhaps Saturday's pair of losses to the Tigers can be considered a necessary calamity, a valuable debacle. Not that...

Zulgad: Now or never: Miguel Sano will get one final chance to prove he belongs with Twins

Two days ago, Miguel Sano was a struggling platoon player getting occasional starts at first base against lefthanded pitchers and probably wondering if this was how his time in Minnesota would end. Forty-eight hours later, Sano remained that same player with one big difference: The Twins are going to give him a final chance to prove he belongs.

Sano is out of the lineup for Sunday's game against the Tigers. Sano will remain on the bench for the third time in four games, and he looks like he won't be in store for an everyday role with the Twins having returned multiple key players from the injured list in recent weeks. Alex Kirilloff, Nelson Cruz and Josh Donaldson are all ahead of Sano in the pecking order at first base, designated hitter and third base, respectively.

By now, we are sure that you have seen Miguel Cabrera’s walk-off bloop single to give the Detroit Tigers a 5-4 extra inning win over the Minnesota Twins. But here is Miggy’s big hit as it was called by Tigers radio play-by-play man Dan Dickerson. Let’s go!!!

No Cruz, no Ohtani at Target Field

Twins fans are getting a little less Sho-time than they might have thought this series. A day after the Angels announced All-Star Shohei Ohtani would not pitch at Target Field in the four-game series between the Twins and Angels, Ohtani was out of the lineup for Friday's lineup altogether. Without him in the lineup, Los Angeles led for most of the night until the Twins chipped away before scoring two eighth-inning runs to beat the Angels 5-4.

Miguel Sano operating first base for Twins on Tuesday

Minnesota Twins first baseman Miguel Sano is batting seventh in Tuesday's game against the Chicago White Sox. Sano will make his 60th appearance at first after Alex Kirilloff was benched against lefty Dallas Keuchel. numberFire's models project Sano to score 10.0 FanDuel points at the salary of $2,500.

MINNEAPOLIS (AP) -- Andrew Heaney found his groove, retiring the last 11 batters he faced. The left-hander rediscovered his belief in his own ability, too. Jack Mayfield hit a three-run homer and Heaney finished seven innings for his longest start of the season, leading the Los Angeles Angels past Minnesota 3-2 on Thursday night after the Twins traded away All-Star slugger Nelson Cruz.

CLEVELAND -- Nelson Cruz packed up his big bat and joined a contender. The Tampa Bay Rays acquired Cruz, one of baseball's most proven sluggers, in a four-player trade with the Minnesota Twins on Thursday night. Cruz was well aware of the likelihood he'd be dealt this month with the...

CHICAGO (AP) — Max Kepler homered for a second straight game, Jorge Polanco also went deep, and the Minnesota Twins beat the Chicago White Sox 7-2 on Wednesday night. The Twins beat the AL Central leaders for just the fourth time in 16 games. They bounced back after Chicago rallied late to win Tuesday’s game and came out on top after losing five of six.

Miguel Sano was perhaps the most emotional member of the Minnesota Twins after learning Nelson Cruz had been traded to the Tampa Bay Rays. "He's my dad," Sano said Thursday after the Twins fell 3-2 to the Los Angeles Angels, according to Do-Hyoung Park of MLB.com. "He's my guy and everything. And I hope he comes back next year to the Twins' organization. I saw him cry, and I'm crying too when I saw him like that."

CLEVELAND — Nelson Cruz packed up his big bat and joined a contender. The Tampa Bay Rays acquired Cruz, one of baseball’s most proven sluggers, in a four-player trade with the Minnesota Twins on Thursday night. Cruz was well aware of the likelihood he’d be dealt this month, with the...