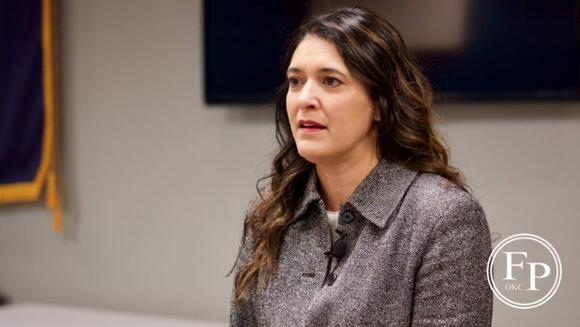 OPINION — U.S. Representative Stephanie Bice will never be your moderate friend in Washington, D.C. She is proving only to be a generic Republican pawn, drooling out National Republican Congressional Committee talking points while her party attempts to dismantle democracy.

Bice surprised many progressive-leaning Oklahomans when she became the only member of the state’s congressional delegation to vote in favor of a commission to investigate the January 6 attack on the U.S. Capitol by domestic terrorists.

“It is critically important that the commission’s work not interfere with ongoing criminal investigations,” Bice said in a prepared statement sent to Oklahoma City Free Press. “But there is much more we must know about the circumstances surrounding that day.”

Apparently after getting an earful from Oklahoma conservatives, Bice followed up that statement by releasing a video attacking her favorite bogeyman, Speaker of the House Nancy Pelosi.

“First and foremost, I will not let this commission be a witch hunt by Nancy Pelosi,” Bice said in the video. “The purpose of the commission is not to go after former President Trump but to find out why the Capitol Police and the Sergeants at Arms were so unprepared.”

So, according to Bice, the focus should not be on whether some of Bice’s colleagues helped the attackers find certain Congressional offices within the Capitol, or whether Trump instigated the attack (which he did on camera). She wants the Capitol Police, who were attacked and sustained casualties, to be investigated.

In her November 2020 victory speech, Bice showed exactly what kind of generic Republican she would be once she took office.

“I am thrilled that once again Oklahoma is on the federal level…red,” Bice said . “But, let’s be clear, the real work begins tomorrow because I’ve gotta go to work to give Nancy Pelosi a new title and that is former speaker of the house.”

In a November 17, 2020 column , I expressed just how disappointing it was to have a lazy Steve Russell clone take back the seat for Republicans.

“That is all Stephanie Bice has planned for us?” I wrote. “To be a pain-in-the-ass backbencher in the House Minority and work as a door jam against progress?”

Bice won with 52 percent of the vote, which she did in part by convincing moderates and more than a few progressives that she would be a bipartisan voice for an increasingly purple district.

But rather than extend an olive branch to Horn voters, Bice promised to be an empty vessel for conservative groups to fill with their wish lists.

Bice was always an anti-choice, gun-nutty arch-conservative when she served in the Oklahoma State Senate. She simply marketed herself effectively as one who smiles and drinks local beer while she takes away women’s right to choose, restricts immigration and lowers the last remaining common-sense barriers to gun ownership.

Progressives frequently make the mistake of believing there is still hope for moderation among Republicans. We want to believe in the false myth of the reasonable Red Stater. Bice is a clear example of the falsity of such hopes.

Much as some media outlets chose to lionize U.S. Rep Liz Cheney for supporting the January 6 commission, only to find out she has no problem with Heritage Action’s syndicated anti-voting rights legislation, many people refuse to remember Pete Townshend’s words and are fooled again and again.

There is no moderation in the Republican Party, nor will there be in the foreseeable future. If Bice were an actual moderate, she would be condemned by party leadership.

With Bice’s victory last year, Oklahoma’s 5th Congressional District got a Capitol Hill loiterer as its representative. Her Pelosi name-checking is lazy boilerplate.

And this week she is holding a telephone town hall with Oklahoma veterans, which is cheap virtue-signaling in Oklahoma. As a veteran and a progressive, I resent Bice’s use of veterans as props.

Bice is showing us her true self, and as Maya Angelou famously wrote, “When someone shows you who they are, believe them the first time.”

Sustain our journalism by becoming a supporter

Oklahoma City Free Press is dedicated to providing high quality journalism that positively impacts our community. Click this link to support our mission.

Florida Gov. Ron DeSantis, who recently made headlines for flying 48 migrants to Martha's Vineyard, was praised by Republicans for standing up against the Biden administration's immigration policies, but his political stunt has angered one of his closest allies – former President Donald Trump. Trump has privately accused DeSantis...
FLORIDA STATE・2 DAYS AGO
Newsweek

Cruz's tweet was in response to a clip of Senator Amy Klobuchar saying that Hurricane Ian is a reason why voters should back Democrats in the midterms.
FLORIDA STATE・2 DAYS AGO
The Independent

A court filing by Donald Trump’s legal team has revealed that the former president hoarded some 200,000 pages of federal documents upon leaving office, spread between the 11,000 documents already mentioned following the search of Mar-a-Lago.In the filing, which contains Mr Trump’s objections to an accelerated review schedule laid out by special master US District Judge Raymond Dearie, his lawyers argue that an early October deadline for scanning and reviewing the documents is unrealistic because they cannot be processed quickly enough.The former president’s team also claims that Judge Dearie is overstepping his authority by asking them to confirm the...
FLORIDA STATE・5 HOURS AGO
Salon

With Hurricane Ian bearing down on Florida, it's completely understandable why the House committee investigating the January 6 insurrection postponed Wednesday's scheduled hearing. No new date has been scheduled, though it will be coming soon and is likely to be another doozy of a hearing. As Heather "Digby" Parton, notes, the word is that the committee will focus heavily on the role of long-time Donald Trump confidante Roger Stone, and the role he played in planning and executing the Capitol riot.
POTUS・1 DAY AGO

When former President Donald Trump went to court against the Justice Department to stall the federal investigation into classified documents at his Mar-a-Lago resort in Palm Beach, Florida, a district judge he appointed, Aileen Cannon, granted Trump everything he asked for, appointing a special master to review the documents for executive privilege even though no legal precedent grants a former president privilege over national security documents, and effectively blocking the DOJ from conducting a national security review until the special master's work is complete.
POTUS・1 DAY AGO
Salon

Trump did not want to condemn white supremacists right away during his 2016 campaign. That's according to NYT's Maggie Haberman's forthcoming book, "Confidence Man." Trump told Chris Christie that "a lot of these people vote," referring to white supremacists. Then-2016 Republican presidential candidate Donald Trump did not immediately condemn white...
POTUS・1 DAY AGO
Daily Mail

Biden snaps at reporter for asking 'totally irrelevant' question about his relationship with Ron DeSantis: Insists hurricane response is 'nothing to do' with politics - and warns Ian could be 'deadliest' in Florida's history

President Joe Biden warned Florida it could be facing the deadliest hurricane in its history on Thursday, as he praised emergency workers and warned gas companies not to use the devastation to raise prices. And he tried to scotch stories about any rivalry with Florida's populist Republican governor, insisting he...
FLORIDA STATE・17 HOURS AGO

Her lawyer said Thomas was "happy to cooperate with the Committee to clear up the misconceptions about her activities surrounding the 2020 elections."
MISSISSIPPI STATE・14 HOURS AGO