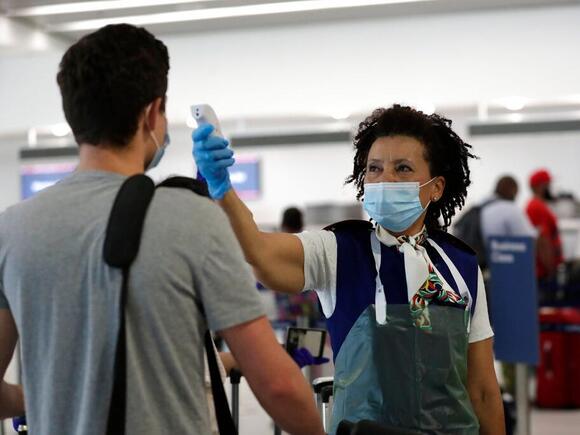 Some flight attendants said pandemic-fueled airline cleanliness has decreased the likelihood of getting sick on board.

One Chicago-based flight attendant, who has been working for more than seven years, said she would usually get sick with a cold or flu around two to three times per year due to the amount of people she was exposed to on the job.

But she told Insider she hasn't had a cold at all this year. The flight attendant credits the use of masks and decreased passenger interaction to her better health during the pandemic.

"There's not much passenger interaction, and that's intentional because of how high risk flight attendants are," the flight attendant told Insider. "We are flying around all the time. We have a higher risk of infecting more people if we were to contract COVID, so they want us to have as little interaction as possible while still maintaining safety standards."

All flight attendants interviewed work for major US carriers, though they asked not to name their employers in order to speak openly. Insider confirmed the employment of all the flight attendants featured, including those who wished to stay anonymous so they could speak without fear of retaliation from airlines.

Got a tip? If you're a flight attendant with a story to share, email the author at aakhtar@insider.com.

Airlines overhauled cleanliness during the COVID-19 pandemic - and flight attendants said they got sick less.

Sarah, a Georgia-based flight attendant with a major US carrier, said the biggest difference she's noticed at work has been the "cleanliness factor," or how airlines have stepped up their filtration systems and cleaning in-between flights.

"As flight attendants, we have a lot more of an active role in making sure the airlines are clean," Sarah told Insider. "There's just a lot more emphasis on the cleanliness of the aircraft."

Pia, a Detroit-based flight attendant, told Insider she enjoyed working early in the pandemic because people did not know much about how COVID-19 spread and wanted to limit their interactions as much as possible. "It was just a very smooth process," she added.

As better research showed COVID-19 is mainly transmitted through the air rather than touched surfaces, airlines have touted their high-quality airline filtration to get people back on board. Southwest Airlines CEO Gary Kelly said passengers "should fly" during the coronavirus pandemic because of how well air cabins recirculate and filter air.

Jenn Ayala, a flight attendant based in New Jersey, said before going on flights she would take vitamin C and hope she didn't get sick. With additional spraying of cabins and physical distancing, Ayala said she worries less about getting sick on board.

"It just makes you feel safer to know your flight has been disinfected, no matter how short the leg is," Ayala told Insider. "Even if it's a 20 minute quick turn, they're still going to spray."

Some flight attendants hope airlines' commitment to public health can stick around for good.

Americans are gearing up for a summer of travel, according to recent data.

The Transportation Security Administration said it screened 1.8 million people at airport security this month, marking a new record high number of air travelers since the beginning of the coronavirus pandemic.

The Centers for Disease Control and Prevention relaxed COVID-19 safety guidelines for vaccinated people, but all Americans will need to continue to wear masks inside airports and on airplanes.

The airline industry, which lost significant revenue during the pandemic, is doing away with some COVID-19 safety measures. Southwest rolled back cleaning procedures in August to speed up plane turnaround times, and Delta stopped blocking the middle seat on May 1.

But some flight attendants said they are hoping the industry's dedication to public health sticks around for good.

One San Francisco-based flight attendant said the profession requires her to be exposed to hundreds of people per day, which requires having a robust immune system.

"I honestly don't really get sick in general," the flight attendant said. "I think that flight attendants and cockroaches would be the only people to survive the apocalypse, just because we're exposed to so much."

Though the flight attendant said though she did not get sick much before the pandemic, her airline used to discourage employees from taking too much sick time.

She said a positive change from the pandemic is her carrier's more lenient attitude toward taking sick days. Before the pandemic, calling in sick for two weeks would result in "big trouble," but her airline granted 14-day quarantine periods for people exposed to COVID-19 to protect the rest of the crew.

American Airlines crews say lodging is lacking on the road

How to not be a jerk on the plane, according to flight attendants

In recent months, videos of airline passengers misbehaving have become as much a fixture of pandemic life as masks and WFH athleisure. It seems that not a week goes by without police needing to escort an unruly passenger from a plane. Some altercations have taken a violent turn, with passengers punching and even biting flight attendants. Honestly, what has become of us (well, not so much "us" as "these fools," because I am an angel on the plane)?

A New York court has been asked to rule on whether flight search engines breached Southwest Airlines' terms of service by posting airfares.

American Airlines FAILED to provide pilots and flight attendants with 'hotel rooms during layovers, forcing them to sleep next to baggage conveyor belts in airports', complaints say

Pilots and flight attendants for American Airlines are struggling to find transportation and hotel accommodations during layovers, unions for the two groups say, and in some cases it's leading to a lack of sleep for crews. Complaints filed Tuesday by the Association of Professional Flight Attendants and the Allied Pilots...

Delta Air Lines extended the elite status of all of its SkyMiles Medallion members yesterday for another year. Will American Airlines and United Airlines follow?. Delta Air Lines Extends Elite Status For All SkyMiles Members. Yesterday, Delta became the first major U.S. airline to extend status for a second year...

ATLANTA - Atlanta-based Delta Air Lines says business is soaring post-lockdown, but now the company needs to hire thousands of workers to keep up with demand. In a letter posted on the company's website, CEO Ed Bastian says Delta will be hiring more than 5,000 people across the business to help ease some of the challenges caused by the demand.

Two issues are at play here. First, is the mask mandate itself for three-year-olds. Second, is the inconsistent enforcement of it. Once again, another family was forced to step off a Southwest Airlines flight after their three-year-old son could not keep his mask on…but they flew again the next day and he wasn’t wearing a mask.

Why the Hell Are American Airlines Pilots Sleeping at Airports?

This just is not right and could put people's lives at risk. The Dallas Morning News reports pilots and flight attendants for Forth Worth based American Airlines are sleeping in airports according to unions because the company is not booking hotels for them during layovers. “We have flight attendants sleeping...

This week I had my first experience applying American Airlines Executive Platinum status benefits to a flight operated by Alaska Airlines and it included a super early complimentary upgrade to First Class. Reciprocal benefits between American AAdvantage & Alaska Mileage plan (including upgrades for top tier elites) were announced in...

Flight attendants train in self-defense amid spike in unruly passengers

Miami (CNN) — "Help!" yelled a flight attendant as she grabbed a knife-wielding man and wrestled to pin the knife against her hip. "I need help!" Then the struggle stopped. "Alright, let's do it again," the instructor said. "Reset!" The knife was made of rubber. The man was a fellow...

Eighty-four percent of flight attendants have dealt with unruly passengers on board, a new labor union survey shows. Seventeen percent of respondents said they experienced a physical incident. The FAA has received more than 3,600 complaints of unruly passengers. Verbal attacks. Seat kicking. Throwing trash at crew. Those are some...

1 in 5 flight attendants say they've had a passenger get physically aggressive with them: 'This is not a 'new normal' we are willing to accept'

The union representing flight attendants is asking the FAA to make its "zero tolerance" policy permanent and the DOJ to prosecute violent offenders.

Following the string of incidents involving unruly passengers on major airlines, American Airlines is deciding to pause its alcohol sales for the main cabin until the fall. The airlines’ mask mandate runs until September 13th and alcohol sales may be suspended until then due to the uptick of violence and misconduct that has happened in the previous months.

As air travel demand increases, a vast majority of flight attendants say they have dealt with unruly passengers and nearly 1 in 5 experienced a physical incident, including shoving, kicking seats and harassing flight crews at airports, according to a survey of flight attendants released Thursday. The Assn. of Flight...

Restaurateur Danny Meyer told CNBC he's enacting new vaccine policies amid "a crisis of people who have not been vaccinated."

United Airlines announced a new option for passengers to preorder food, snacks, and beverages online up to five days before their scheduled flight. Orders can be made either on United’s website or through the airline’s mobile app. United claims that it is the “first and only” carrier to allow economy customers this option.

American Airlines passenger who refused to wear a mask screamed for 10 minutes during her arrest, reports say

A New Orleans-Dallas flight was delayed for up to an hour at Louis Armstrong International Airport while a maskless woman was arrested, reports say.

Fuel Shortage at Some U.S. Airports Might Last Until Mid-August, American Airlines Says

American Airlines said their fuel shortage could last until mid-August in parts of the country, the Associated Press reported. A company memo went out to pilots on Monday with the information and asked pilots to conserve fuel where they could, like leaving one engine off while taxiing. The airline said...