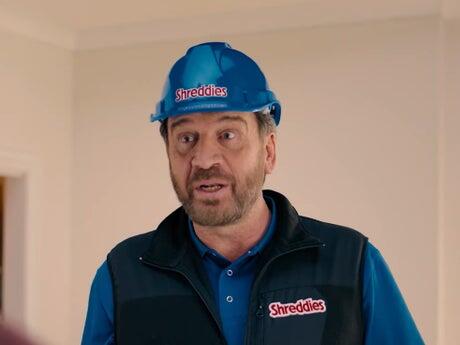 Nick Knowles has said that he will continue working as host of the BBC home improvement show DIY SOS , following a dispute over a TV advertisement for Shreddies breakfast cereal.

The presenter, who has hosted DIY SOS since 1999, featured in a 30-second advert as a builder, referring to himself as “Nick ‘Get it Done’ Knowles”.

According to reports, the appearance threatened to violate the BBC’s rules on commercial deals, and his future on the series was, for a time, uncertain.

However, the BBC and Knowles have now released a joint statement saying: “Nick and the BBC have resolved the issue recently reported relating to Nick’s commercial agreements and BBC guidelines.”

Because the Shreddies advert will continue running on TV, Knowles will not feature in the DIY SOS Children in Need special airing later this year, but the statement added that he will be “back on our screens in 2022”.

In his own statement, Knowles said: “I have always said that DIY SOS is more than just a presenting job for me, it’s part of me, it has my heart and working for the BBC for over 22 years is something I have never taken for granted.

“The DIY SOS Children In Need special will air in November with a guest presenter and I will be cheering them on from the side lines.”

Meghan Markle was “very unhappy” with a cover issue of Vanity Fair because she believed the headline referring to her relationship with Prince Harry was “racist”, according to a new book. The Duchess of Sussex, 41, was reportedly furious with the headline of the October 2017...
CELEBRITIES・2 DAYS AGO
The Independent

Kim Kardashian’s son, Saint West, has sparked a debate about privacy, after he was seemingly spotted flipping off a fan who was filming him.In a recent video posted to TikTok, a user who goes by the name @sxchaz documented how he saw Saint in a hotel room in Paris. Over the weekend, Kardashian took a trip to France with the six-year-old and his siblings-North, nine, Chicago, four, and Psalm, three-whom she shares with ex husband Kanye West, for Paris Fashion Week. At the start of the clip, @sxchaz shared an image of himself posing for the camera, writing in...
CELEBRITIES・9 HOURS AGO
The Independent

A woman has sparked a debate after revealing how her husband reminds her to “tuck” her stomach in when taking photos.In a video posted to TikTok last month, Saira, @sairaayan__, shared a clip of her and her husband taking a picture together. “When you’re taking pictures and he reminds you to tuck in your stomach,” she wrote in text over the video.The footage featured Saira’s partner lightly tapping her stomach, prompting her to readjust her posture. The pair then looked at each other before Saira briefly touched her stomach and they both smiled at the camera. In the caption...
BEHIND VIRAL VIDEOS・5 HOURS AGO
The Independent

Queen Margrethe II of Denmark has apologised to the members of her family who were left “saddened” by her decision to strip four of her grandchildren of their royal titles.The monarch’s decision was first announced in a statement shared by the royal palace last week, in which it was revealed that the children of the Queen’s second son, Prince Joachim, would no longer have prince or princess titles, nor His/Her Highness titles.The ruling will impact the Queen’s grandchildren Prince Nikolai, 23, Prince Felix, 20, Prince Henrik, 13, and Princess Athena, 10, who, from 1 January 2023, will instead go...
EUROPE・5 HOURS AGO

House of the Dragon’s ‘too dark’ lighting was ‘intentional creative decision’, HBO says as fans complain

HBO has spoken out in defence of House of the Dragon after fans complained that the lighting on the most recent episode was “too dark”.During Sunday (2 October) night’s episode of the Game of Thrones spin-off series, many viewers claimed that the lighting was so dim they were struggling to make out the action on screen.This was a criticism often levied at Game of Thrones, with the season eight episode “The Long Night” so dark the cinematographer suggested viewers should watch it in as dark a room as possible to optimise their viewing experience.Following the most recent episode of...
TV SERIES・7 HOURS AGO
The Independent

Jeremy Paxman’s doctor diagnosed him with Parkinson’s disease after noticing that he was less “exuberant” on University Challenge, the veteran broadcaster has revealed.The former Newsnight presenter said the diagnosis came when he was in hospital after collapsing while walking his dog.One of the doctors said he had noticed that the 72-year-old’s face had acquired a “Parkinson’s mask”.It was completely out of the blueJeremy Paxman on his Parkinson's diagnosis“Well, it was completely out of the blue,” Paxman said of the diagnosis.“I was having a walk in the square across the way. There was ice around and I had the dog with...
CELEBRITIES・4 HOURS AGO
The Independent

Rob Beckett has joked that he’s an “accidental activist” after unintentionally leading a Just Stop Oil protest.In the clip shared on TikTok, Beckett explained that he’d decided to walk along Whitehall on Monday (3 October) while en route to record his voiceover for Celebs Go Dating.However, he’d found himself getting among a protest by climate activists from the Just Stop Oil collective, who are demonstrating every day in October to demand climate action.“So I was getting a taxi to work, right, I put my Crocs on because I was in a taxi and the VO booth for Celebs Go...
BEHIND VIRAL VIDEOS・6 HOURS AGO
The Independent

The Walk-In review: A disturbing, unflinching portrait of British neo-Nazism

There is always a danger when television executives – who live, predominantly, in four-bedroom London townhouses, picking up oat milk flat whites before electric bicycling their way into Soho – decide to depict the lives of working-class northerners. That jeopardy is on full display in ITV’s five-part true crime thriller, The Walk-In, a look at the rise of the National Action terror group in the wake of the murder of MP Jo Cox. Thankfully, this gritty, disturbing drama manages to squeeze pathos out of one of the most troubling stories in recent British history.Is there a better actor working in British...
TV & VIDEOS・4 HOURS AGO

Hilarious footage of a goat singing during an animal blessing service has gone viral with more than two million views.Pablo the goat sent people into hysterics after he appeared to ‘bleat’ along to the organ music as Worcester Cathedral held a special animal blessing service last week.The service, filmed and shared on TikTok, will also be broadcast on BBC’s Songs of Praise next month.“We think Pablo the goat enjoyed the Animal Blessing Service,” a spokesperson for Worcester Cathedral said.Click here to sign up for our newsletters.
ANIMALS・7 HOURS AGO