By Adam White
Posted by
The Independent
26 days ago

Jeremy Clarkson has joked he will “live forever” if he doesn’t die in the next year, as “everyone” he knows dies at 61.

The host of The Grand Tour turned 61 in April, and revealed that his age has inspired him to think more about his father’s death and becoming an elderly man himself.

“When dad died, I thought of him as an old man, but I don’t feel old,” the presenter continued. “When I see myself on screen I think, ‘Who’s that?’ I always expect a 19-year-old to be looking back at me.

“But old people don’t look like we think they should. When my generation is in old people’s homes we’re not going to be dancing to Vera Lynn, it’ll be ‘White Riot’ by The Clash.”

Clarkson revealed in January that he thought he would die “alone” over Christmas 2020 after being struck down with Covid.

In a newspaper column, Clarkson said that because he is “60 and fat and because I’ve smoked half a million cigarettes and had double pneumonia”, he believed he would “probably die, on my own, in a lonely plastic tent”. 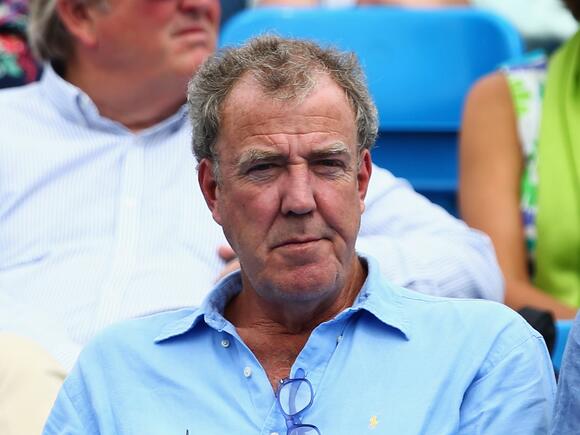 “I took myself off to bed with the new Don Winslow book and a bag of kale to wait for the Grim Reaper to pop his head round the door,” Clarkson wrote.

The former Top Gear presenter also sparked controversy in March by dubbing Meghan Markle a “silly little cable TV actress” in the wake of her bombshell interview with Oprah Winfrey.

Jeremy Clarkson’s fly on the wall documentary about his Cotswolds farm is a huge hit – but an exasperated young tractor driver who regularly shouts at the star and tells him he’s ‘f***ed up’ has become the unlikely hero of the show. Straight-talking Kaleb Cooper, 21, is filmed repeatedly giving...

Jeremy Clarkson on new farming show: 'I get shouted at all the time', he tells Sky News' Backstage podcast

He's known for hosting The Grand Tour and previously Top Gear, but in his latest show Jeremy Clarkson is swapping cars for cows as he takes up farming. Clarkson's Farm sees the presenter getting to work on land he owns following the retirement of the farmer who had been looking after it, and follows his antics for a year.

Jeremy Clarkson and his new show Clarkson’s Farm has been a huge success for Amazon and the presenter, with fans singing the show’s praises across social media. But with this praise comes questions of whether there will be a second season of the show. The show, which only spans 8...

Thomas Markle Says He Heard About The Birth Of Meghan Markle & Prince Harry's Daughter 'On The Radio,' Admits He'll 'Be Very Disappointed That I Don't Get To Hold My Granddaughter'

Keeping him out of the loop. Meghan Markle didn't tell her estranged father, Thomas Markle, that she welcomed her second child — a girl named Lilibet Diana. "No phone calls, I just heard it on the radio," Thomas said in a preview clip for 60 Minutes Australia, which will premiere on Sunday, June 13.

He’s not out to rock the vote. Dwayne âThe Rockâ Johnson says he doesn’t have the “patience” to dabble in politics, after a survey released in April found that nearly half of the 30,000 respondents wanted him to run for president. “Quite frankly I’m not sure I even have the...

Better late than never is how the saying goes. Mark Hamill celebrated her Star Wars co-star Carrie Fisher late last night on Twitter for her posthumous induction into the 2022 class of the Hollywood Walk of Fame. Hamill wrote, “I congratulate and salute all 38 new #HollywoodWalkOfFame honorees-Welcome to the...

Liam Neeson Says He Won’t Be in ‘Obi-Wan,’ but Kimmel Doesn’t Buy It (Video)

Liam Neeson says he won’t reprise his role as Jedi master Qui-Gon Jinn in the upcoming Disney+ series “Obi-Wan Kenobi” with Ewan McGregor — but Jimmy Kimmel isn’t sure he really believes that. In an interview with Kimmel on Wednesday’s episode of “Jimmy Kimmel Live,” Neeson joked that even a...

Escape to the Chateau star’s Dick Strawbridge, 61, tied the knot with his wife Angel Adoree, 42, in 2015 at their 19th century French Chateau. The Channel 4 series first aired the following year and has been a hit among viewers, as the couple gives an insight into life renovating their home.

Our Yorkshire Farm star Amanda Owen regularly keeps fans updated on social media as she gives fans an insight into her day-to-day life working behind the scenes. The Channel 5 star took to Twitter and shared a candid snap as the mum-of-nine share attempted to climb a high wall. The...

Show business is widely regarded as one of the world's most glamorous and exciting industries. However, several high-profile stars of the stage and screen have decided to leave the limelight for more conventional careers. Below Newsweek takes a look at the high profile former actors who have decided to ditch...

Hugh Grant has said that he “almost enjoys acting” now he no longer plays the “charming leading man”.The British star, 60, rose to fame starring as the male lead in romantic comedy films opposite actors including Julia Roberts (Notting Hill), Sandra Bullock (Two Weeks Notice), Andie MacDowell (Four Weddings and a Funeral) and Drew Barrymore (Music and Lyrics).He also starred as Daniel Cleaver, one of two romantic interests to Bridget Jones (Renée Zellweger) in the first two films.However, in recent years, the actor has enjoyed a newfound appreciation among critics by playing multi-layered roles in projects such as Paddington...

Announced earlier this week, Ming-Na Wen is one of multiple Star Wars favorites named as part of the Hollywood Walk of Fame Class of 2022, and the tremendous honor has nearly left her speechless. To Star Wars fans, Wen might be best known for playing the fan favorite role of Fennec Shand on The Mandalorian, a role she will reprise for The Book of Boba Fett. She has also voiced the character for the animated Star Wars series The Bad Batch on Disney+.

PRINCE Harry “had a ferocious fight” with William on the eve of his wedding to Meghan Markle and “weren’t speaking” before the trip to Australia, it has been claimed. The royal brothers are said to have had a number of blazing rows, according to an unnamed source, with the one...

Shortly before the unveiling of the monument to Princess Diana, it became known that there was a complete rift between the brothers Prince William and Prince Harry. According to insiders, the reason for the sudden cooling of feelings could be the periodic antics of the Duke of Sussex and his wife Meghan.

Well That Was Quick -- Netflix cancels Jamie Foxx's sitcom. Well That Was Quick. I watched only the first episode and had to turn it off. Hopefully he got a bag off it... Netflix, in its merciful benevolence, has finally granted the desperate, exclamation-point-capped pleas of Dad Stop Embarrassing Me! Which is to say that the streaming giant has pulled the plug on the single-season sitcom, which starred Genuine Movie Star and Certified Oscar Winner Jamie Foxx, returning to the TV comedy roots that helped jump-start his career. Per Deadline, the series was based on Foxx’s own relationship with his daughter, Corinne; both Foxxes produced on the series, which co-starred Kyla-Drew as the embarrassed daughter-proxy in question.

Pretty much anyone with a star on the Hollywood Walk of Fame has made it. Whether a movie, TV or rock star, more than 2,400 celebrities are represented on the famous walkway—but there are a few surprising names missing. This week, it was announced that the late Carrie Fisher is...

Sasha Dixon will no longer have to worry about her embarrassing dad, now that Netflix has cancelled Jamie Foxx’s family comedy Dad Stop Embarrassing Me! after one season, our sister site Deadline reports. Foxx headlined the series as Brian Dixon, a successful business owner and bachelor who became a full-time...

Kevin Hart had some special help when preparing for his upcoming movie. The 41-year-old actor has been working to branch out of comedy lately, stretching into drama with Netflix's "Fatherhood" and dipping his toe into the world of action-adventure with the upcoming film "Borderlands." Earlier this week, Hart took to...