Trump grumbles about grand jury in criminal probe: ‘No other president has put up with what I have’

By Maroosha Muzaffar
Posted by
The Independent
25 days ago 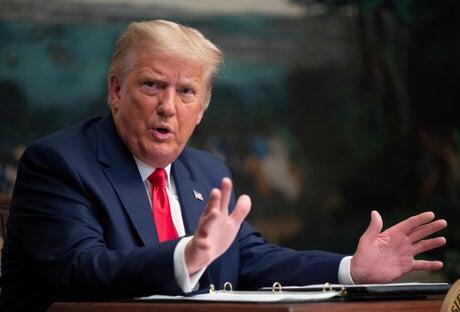 Donald Trump has blasted the Manhattan district attorney for convening a grand jury that will decide whether to indict him should prosecutors present the panel with criminal charges.

Two sources close to the investigation revealed to the Washington Post that the grand jury that will meet three days in a week for the next six months, could indict him on criminal tax evasion and other charges related to the Trump Organisation’s business affairs.

In a statement on Tuesday, Mr Trump said: “This is a continuation of the greatest Witch Hunt in American history. It began the day I came down the escalator in Trump Tower, and it’s never stopped.”

“No other president in history has had to put up with what I have had to,” Mr Trump said. He promised to fight “like I have been for the last five years.”

Prosecutors have said that they will look into the former president’s business dealings before his election in 2016 “including whether the Trump Organisation manipulated the value of real estate properties to defraud insurance companies and banks.”

The Washington Post also reported that the district attorney is also “examining the compensation provided to top Trump Organisation executives”.

Mr Trump said: “This is purely political, and an affront to the almost 75 million voters who supported me in the Presidential Election, and it’s being driven by highly partisan Democrat prosecutors.” He added in his statement: “Our country is broken, our elections are rigged, corrupt, and stolen, our prosecutors are politicised.”

Experts have claimed that the move by the district attorney proves that the investigation into Mr Trump and his criminal charges has progressed.

Rebecca Roiphe, former Manhattan assistant district attorney who is now a professor at New York Law School, told the Washington Post that the “recent step of seating a long-term panel shows that Vance’s investigation has progressed to the point that prosecutors will visit the grand jury, present evidence and witnesses, and potentially ask that charges be considered.”

The U.S. Justice Department dropped a lawsuit that sought to seize profits from a book written by John Bolton about serving as national security advisor to ex-President Donald Trump. The Justice Department also informed Bolton that it is closing an investigation into whether he committed a crime by possibly disclosing...

As the Manhattan DA ramps up the heat in their investigation into the Trump Organization, The New York Times reports that DA Cy Vance may charge Trump’s money man Allen Weisselberg as soon as this summer. Vance has also tapped two top prosecutors to assist him on the case. MSNBC’s Chief Legal Correspondent Ari Melber is joined by DOJ veteran Matt Miller to discuss the significance of Vance’s hiring decision and what the additions to the team signal about the state of the investigation. Miller explains that Vance’s decision to bring in two veteran prosecutors is not just to make the investigation strong, but to tell Vance before he makes any decisions that “this is a case you can win.”

Prosecutors in New York City have reportedly obtained the personal tax returns of a top Trump Organization executive. Allen Weisselberg, the long-serving chief financial officer of former President Donald Trump's business, is the subject of a criminal tax investigation. Manhattan District Attorney Cyrus Vance Jr. is working to ascertain the extent to which Weisselberg was given certain perks by former President Donald Trump and whether taxes were paid on those perks, according to the New York Times.

A federal judge declined to order the Department of Justice to release the second part of a memo about the Mueller report written to former Attorney General William Barr. The memo argued that there was not enough evidence to prosecute then-President Donald Trump for obstruction of justice. Judge Amy Berman...

Manhattan prosecutors may have found their "insider" as a grand jury considers whether charges are warranted against former President Donald Trump, according to a top prosecutor in Robert Mueller's special counsel investigation. Andrew Weissmann, a former Justice Department official and FBI general counsel, said reports about the testimony of a...

Trump Says More Countries Should Ban Twitter: 'Perhaps I Should Have Done It While I Was President'

After the African country of Nigeria blocked its citizens from using Twitter, Republican former President Donald Trump publicly wondered whether he should have done the same during his presidency. Nigeria blocked Twitter after the social media site deleted President Muhammadu Buhari's tweet threatening southeastern secessionist groups that had attacked government...

Michael Cohen on Trump criminal probe: Everyone in the company lied for Donald

“This isn’t about flipping, folks. This is about telling the truth. And the problem is—everybody lied for Donald. It wasn’t just me. It was the entire company," says Michael Cohen discussing the pressure on Allen Weisselberg and other Trump-Org members amid criminal probe.

While longtime Trump Organization CFO Allen Weisselberg ducks questions about the criminal probe into the company, a longtime executive who reported directly to Weisselberg just went under oath before the New York grand jury. Feds hope the pressure will turn Weisselberg into a cooperating witness. MSNBC's Chief Legal Correspondent Ari Melber is joined by former SDNY prosecutor John Flannery and MSNBC's Juanita Tolliver to discuss the updates in the probe.

President Biden’s Justice Department is in an undeniably difficult position. Given the epic corruption of the department by his predecessor, Donald Trump, maximal transparency and accountability are now imperative. But this will inevitably clash with the department’s understandable desire to cling to certain institutional prerogatives. Senate Democrats have a key...

All 11 Democratic members of the Senate Judiciary Committee are demanding that the Justice Department turn over to Congress an internal legal memo related to former special counsel Robert Mueller 's Russia investigation that is said to have cleared then-President Trump of criminal wrongdoing. The group sent a letter to...

WASHINGTON — If you want to see how Donald Trump remains the driving force in Republican politics, just look at the activity from GOP politicians who are up for re-election or running in Republican primaries next year. Eric Greitens, who’s running in a crowded field of candidates for Missouri’s open...

Fox News, right-wing websites and Republican lawmakers are promoting a new false flag conspiracy that the FBI orchestrated the deadly assault on the US Capitol.

New York law poses the risk of bankruptcy for citizen Donald Trump if the entire Trump Organization is indicted. The Manhattan DA veteran who wrote the memo that may seal Trump’s fate in the New York probe, Daniel Alonso, joins MSNBC’s Chief Legal Correspondent Ari Melber to explain how the Trump Organization could be indicted as a company and why this fact is critical to the ongoing investigation.

Merrick Garland made it clear at his confirmation hearings that he was determined to be consummately apolitical as attorney general. That would generally mean steering clear of efforts to investigate and redress the abuses of the Department of Justice under former President Trump. But circumstances are conspiring against Garland’s plan.

Trump on COVID origins: 'I believe it was a terrible accident, but I believe it came from the lab'

Former President Donald Trump said Wednesday that he believes the coronavirus pandemic is the result of a "terrible accident" during an exclusive interview on "Hannity." Addressing the latest developments in the Wuhan lab-leak theory, Trump told host Sean Hannity that while the pandemic was a "horrible" experience that claimed more than three million lives across the globe, he is fairly certain that it was accidental on China's part.

Vladimir Putin took questions from the press on Wednesday afternoon in Geneva following his first summit with President Biden. The Russian president spoke for more than 55 minutes and took more than two-dozen questions. He did not use a teleprompter at any time during the session. Shortly thereafter, Biden took...

There was a theory, to which I once subscribed, that former president Donald Trump’s efforts to remain salient in American politics could be hobbled by what might be learned after he left office. After all, while he was president, there was an obvious protective layer at play, appointees loyal to Trump who would not be eager to reveal any dubious behavior on the part of the president or themselves. Who knew what might emerge, I figured? Any 2024 bid by Trump might be constrained by some new revelation about what he and his team had done. Given what was already public about his behavior, it seemed safe to assume that more remained to be discovered and that this might do some significant political damage.

Top Republicans are moving to block a Senate inquiry into the Trump justice department’s secret seizure of data from Democrats to hunt down leaks of classified information, fearing a close investigation could damage the former president. Trump, who is facing a mounting crisis of legal problems and political criticism, still...