‘She Was So Strong She Could Knock Me Out’: Passenger Describes Assault On Southwest Flight Attendant 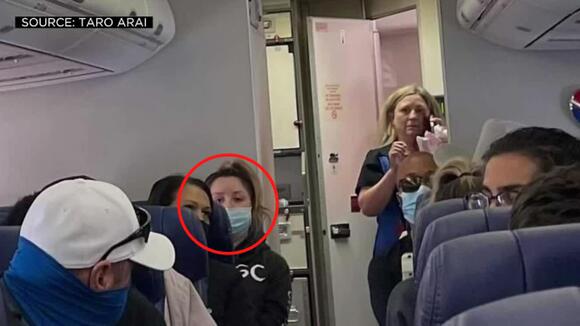 SACRAMENTO (CBS13) – A fight onboard a flight from Sacramento to San Diego resulted in a flight attendant getting punched. CBS13 spoke with a passenger who was on the plane when it happened.

In photos obtained by CBS13, you can see the flight attendant with blood streaming down the side of her face.

The airline said a passenger repeatedly ignored instructions to put up their tray table and buckle their seat belt, then became verbally and physically abusive while the flight was still in the air — right before landing. 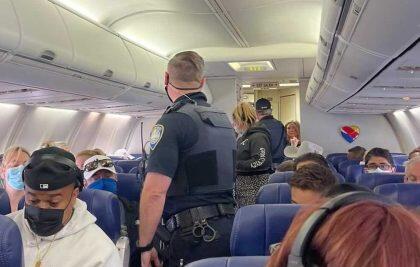 Officers escorted Quinonez off of the plane and arrested her. (credit: Taro Arai)

Taro Arai , the owner of Sacramento restaurant Mikuni, was on that flight and took some photos.  He says he heard yelling, then saw the two shoving each other, and then the flight attendant getting punched in the face.

“So, now she’s bleeding everywhere in the back looking at us and this lady 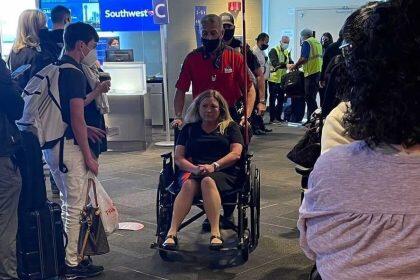 The flight attendant, who also reportedly lost two teeth in the assault, was wheeled through the terminal in a wheelchair. (credit: Taro Arai)

who hit went back to her seat wore a mask — nothing happened seems like,” he said. “I’m like huh, woah, I mean, she was so strong she could knock me out.”

The accused attacker is 28-year-old Vyvianna Quinonez. She was escorted off the plane by officers and was arrested on the charge of battery causing serious bodily injury.

Moment woman, 23, is arrested and forced from Delta flight after she refused to wear a face mask, fought with flight attendants and spat on passengers

The moment a Florida woman was arrested and forced off a Delta flight after allegedly refusing to wear a mask and spitting at other passengers has been caught on camera. Cellphone footage shows the moment Adelaide Schrowang, 23, was escorted off the plane at Southwest Florida International Airport on July 7 when a captain ordered she be removed from the flight.

A United Airlines customer claims a flight attendant accessed her personal phone number to repeatedly call and harass her because she disposed of a used diaper in the waste bin of a lavatory onboard a United Express marketed flight from Montana on Friday. Farah Naz Khan took to social media...

MIAMI -- There was chaos on a Frontier Airlines flight when a brawl broke out. One of the passengers captured cell phone video of the incident. She says it happened after the plane landed in Miami from Philadelphia. Several people, including a flight attendant, tried to intervene and eventually were...

CHARLOTTE — A Charlotte-bound airline passenger tried to open the forward cabin door on their flight and assaulted and bit a flight attendant before being restrained, a spokesman said. American Airlines spokesman Andrew Trull said in an email to the Associated Press that the unidentified passenger on board American Flight...

Two women from the Bronx have been charged with assault and interfering with flight crew after they were accused of hurling racial slurs, spitting on one of their seatmates and assaulting one of the flight attendants on an American Airlines flight from Dallas Fort Worth to Los Angeles. If found...

American Airlines passenger was taped to her seat after she bit flight attendant, carrier confirms

(NEXSTAR) — An unruly American Airlines passenger was bound to her seat with heavy-duty tape on a July 6 flight from Dallas to Charlotte, video posted to social media appeared to show. American Airlines has since confirmed the incident, claiming that the disruptive woman was physically restrained after biting one...

Seattle woman, 'humiliated' by flight attendant over dirty diaper, says she was told she was on no-fly list

A Seattle woman said a flight attendant humiliated her mid-flight for trying to dispose of her daughter's dirty diaper in a bathroom garbage bin and later told her that she had been placed on a no-fly list for creating a biohazard. The woman, Farah Naz Khan, 34, said Monday that...

Fed Up With Being Cursed Out and Attacked, Flight Attendants Speak Out About Unruly Passengers

Flight attendants are now speaking out publicly about the stress of managing increasingly unruly passengers. Two flight attendants, who are members of the Association of Flight Attendants, agreed to speak to CNBC on the record as long as their employer wasn't identified, and a third asked to remain anonymous. The...

A Las Vegas white woman is being charged with a hate crime after verbally abusing an Asian family and punching their 6-year-old son in the neck, Yahoo reports. The woman has been identified as Shelly Hill. In an interview with AsAmNews, the boy’s mother, who requested to be identified by...

Man Found Shot In The Street Near Yuba College In Linda

The Yuba County Sheriff's Office is investigating an attempted homicide in the town of Linda.

‘Falling,’ the thriller of the summer, was written by a flight attendant while her passengers slept

Pop culture offers no shortage of reasons to avoid commercial airlines. Snakes on a plane. Bombs on plane. Leslie Nielsen on a plane. Planes vanish. Planes crash into mountains, and the survivors eat one another. Flying, who needs it, right?. The delirious thing about Falling, T.J. Newman’s debut novel, is...

LAS VEGAS (KSNV) — Passengers were stuck for hours on a plane that took off from Las Vegas and was diverted to Los Angeles this week. A spokesperson for Allegiant Airlines confirmed that a flight out of Las Vegas couldn't land as expected due to a problem with the Stockton Airport's Automatic Surface Weather Reporting System.

'Why would they pick on me?' - Victim of brutal Harlem beating speaks out

NEW YORK - The attack is as violent as it is unforgivable. On Tuesday in Harlem, a group of four adults attacked a woman using a walker. After being strangled by one woman, thrown to the ground, another struck the victim with a pan over and over again. A third attacker kicks her in the head repeatedly, while a male attacker also takes shots at the victim who is a 61-year-old woman out by herself.

A video filmed on American Airlines Flight 1774, which was going from Texas, to North Carolina, in the United States, went viral on TikTok as shows a woman taped to her plane seat. This due to an incident in which the airline ensures that attacked the flight attendants and tried to open the main door of the plane.

Can Pilots Kick Passengers Out Of Planes, Mid-Flight? This Woman Thinks So!

Not long ago, the travel world was rocked for a moment when an American Airlines passenger tried to open the plane door, mid-flight. After de-escalation techniques didn’t work, she was eventually restrained by duct tape, for her own and others’ safety. The responses in the Twitterverse varied from the legalities...

NEW YORK (CBSNewYork) — A 35-year-old man was arrested in connection with an attack on an Asian man in Manhattan. Police said Alex Antoine punched the 48-year-old man in the head and made anti-Asian statements. It happened back in May near 26th Street and Broadway. Investigators said Antoine is seen in surveillance video released after the attack. Antoine was charged with assault as a hate crime.

Flight From Hell: Passengers Land In Stockton 17 Hours After Taking Off From Las Vegas

For passengers on Allegiant Airlines flight 161, an hour-long flight turned into a 17-hour journey.

CONCORD (KPIX) — A search is underway for a freeway shooter in the East Bay. According to the California Highway Patrol a car-to-car shooting on Highway 4 in Concord that killed a young woman and injured a minor Saturday evening. Officers say bullets narrowly missed an infant in a car seat. It happened Saturday at about 6:30 p.m. near the Port Chicago Highway off-ramp of westbound Highway 4. (CBS) At least half a dozen shots struck a black Toyota Camry. CHP investigators said the driver, a 24-year-old woman, died from multiple gunshot wounds. They said the minor in the passenger seat was also...

WALNUT CREEK (KPIX) — Last month, a young DoorDash delivery driver was murdered in Walnut Creek and, while a suspect has been arrested, the victim’s loved ones are speaking out, saying others at the scene should also be held accountable. On June 17, Stacy DeWayne Corley, Jr. was delivering pizza when he was shot nine times and left for dead on California Blvd. in Walnut Creek. It was the result of an alleged road-rage attack but his mother, Kimberley Banks, says police never even told her that her son had been shot when they contacted her by phone. “I could hear him...