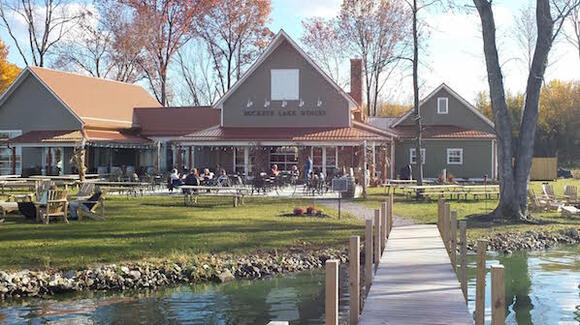 Buckeye Lake Winery, located in Thornville, Ohio has survived through many hardships in the past couple of years, the most recent of them being a kitchen fire about three weeks ago.

In the middle of the night, at about 12:45 a.m, eight fire departments were called to the scene. Upon arrival, firefighters saw smoke billowing out from part of the roof and flames leaping through a broken window. The fire was contained within a half hour, saving most of the building from major damage. Chief Robert Price of the Walnut Township Fire Department stated that the fire “incinerated everything in the kitchen,” but managed to miss the office and the rest of the restaurant.

The winery’s owner, Tracy Higgineotham, was glad no one got hurt, but was devastated at the destruction that will take up most of the busy season to repair. Higgineotham estimated that the winery will be shut down for three to four months while the kitchen gets fixed up.

Businesses are now just beginning to open up and take off again after enduring hefty losses from the pandemic. Higgineotham will be forced to get creative to keep up with the competition. The winery had already been suffering from the Buckeye Lake Dam project before the pandemic hit. Water levels were low, causing any activities on the water to come to a screeching halt. The business took a hit as a result of the dam project, and the pandemic certainly hasn’t helped in terms of profit.

However, the community has come together to show its support for the winery after the tragic fire. They aren’t willing to let the place sink, as some locals claim that the lake is unique and has a lot of history. Others state that Buckeye Lake Winery is the perfect place to gather with friends and family. Higgineotham is grateful for the amount of assistance that the community has shown.

“It’s amazing the amount of community support, the local bars and restaurants, our patrons, local governments, how willing they are to lend a hand to get us up and running and open…”

Now, because of all the abundant support, the winery is already preparing to open up again. They plan on having food trucks in place of a kitchen, and live music every weekend to entice visitors and celebrate the tight-knit community.

As another exciting attraction, the owner is holding a rowing event for the local youth ranging from ages twelve to eighteen. Rowing clubs from Cincinnati, Hamilton, and Westerville are coming in to teach the kids about coastal rowing. The sport allows kids to engage with nature as well as participate in physical activity, promoting healthy habits all around.

Even after the barriers produced by the dam, the pandemic, and the fire, Buckeye Lake Winery looks like they’re getting back on their feet!

Seasons of the North Winery

The Winerie uncorks its restaurant

PERKINS TWP. — A cabernet can deliciously pair with a flavorsome flatbread. And, by coupling a chardonnay with a delectable crème brûlée dessert, it’ll wash down just right. Though bringing together a winery and an asphalt company for a joint business venture seems, on the surface, an odd match. But...

NW Pa. winery eager to start welcoming more visitors who can enjoy the ‘stunning views’ of the lake

Sam Best is the owner and winemaker of Lakeview Wine Cellars in Northeast, Pennsylvania, up along Lake Erie. He’s also one of the first two people to graduate from the former enology and viticulture program at HACC, Central Pennsylvania’s Community College. He and his wife, Becky, began to talk about...

The Best Wineries in Naples

Wine is great for special occasions or simply a wonderful drink with your dinner. Not is it a great way to unwind, but it is also loaded with healthy benefits. Red wine in small doses is healthy for your brain and antioxidants in wine are known to lower the risk of cardiovascular diseases and even type 2 diabetes. It comes as no surprise that many cities around the world are huge fans of wine and Naples is one of them.

A winery, brewery and cafe all at one of the Finger Lakes’ oldest and best-known producers

Wagner Vineyards Estate Winery is one of the oldest wineries in the Finger Lakes Region of upstate New York. It’s also one of the most recognized, having opened in 1979 on the eastern shore of Seneca Lake. By now, the fourth and fifth generations of the Wagner family are overseeing an operation that now includes the winery, a restaurant ( The Ginny Lee Cafe ) that opened in 1983 and a brewing operation that opened in 1997 ( Wagner Valley Brewing Co. ).

We liked the Indigo wine so much from Harmony Winery that we just had to go back for more. It has become our new favorite. It is so refreshing and has a hint of blueberry. When we had a wine tasting on Thursday, we bought 2 bottles of the Indigo. We had a wonderful time during our tasting. Our host was the head winemaker and general manager, Kyle Condra. He was very helpful in selecting our wines to sample. He even offered suggestions on serving it. He was also fun to chat with.

The weather in Chicago is a rollercoaster ride that I wasn’t at all ready for. One day it is scorching hot and we need all our fans and air conditioners blasting all day long. The next day? I am huddled under the covers in 2 sweaters trying to keep warm.

POMONA, Ill. (KFVS) - Wineries across the Southern Illinois Wine Trail are starting to get back to normal, compared to this time last year. “We were completely shut down for business for a period of time last year so, this year comparatively is much better cause we’ve just been open,” said Scott Albers, Wine Maker at Kite Hill Vineyard/

Mike visits with Mike Fornataro, Executive Director of the Buckeye Lake Region Corporation, to discuss how the rebuild of the Buckeye Lake Dam, then COVID-19, hampered tourism in his area and how leaders plan to bring it back. "It's been really rough on our local businesses. They depend on tourism...

Kriselle Cellars Winery in White City, Oregon, is purposefully misnamed after the founder’s wife, Krisell. Scott Steingraber, owner, and wine-maker thought it would be easier for everyone to pronounce. Either way, Kriselle, is on the tip of Joseph V. Micallef’s tongue. He is the Forbes Magazine contributor who praised them...

Three Clark County eateries where the fish and chips are good

Savoring a basket of fish and chips on a sunny day is one of the many summer delights in the Pacific Northwest. Here are three spots to try. 777 Waterfront Way, Suite 101, Vancouver; 360-718-7701. What a Catch’s window on Vancouver’s waterfront is easy to find on a sunny day...

(WDBJ) - As families flocked to Smith Mountain Lake while observing the Memorial Day holiday, small business owners say they were excited to welcome the rush of customers, while others are still looking for summer staff to keep up. “Even on a dreary day, it is still kind of the...

Iowa wineries adapted in 2020 with home wine deliveries, virtual tastings and intimate outdoor gatherings, but many winery owners are gearing up for a rebound in large events — where most native wine sales occur. “We’re expecting this to be a busy summer,” said Cassie Bott, operations manager for Fireside...

Summer is a great time to get out and explore. With the local wine industry in our state continuing to grow, gathering your friends for a wine tasting experience is a fun event to consider. TCL reporter Kristin Haubrich is at Chankaska Creek Ranch and Winery in Kasota. https://www.chankaskawines.com/. Check...

SALT LAKE CITY (KUTV) — The NBA playoffs have fans descending on downtown Salt Lake City, and businesses are seeing a boost. German Beltran, general manager at Blue Iguana, says the pandemic months have been quiet, to say the least. “A few months ago, the downtown looks like a ghost...

On December 22, 2020, Andre Hill was killed in what can only be described as a gross display of police brutality. The 47-year-old black man and supporter of the BLM movement was shot to death by former Columbus police officer Adam Coy. Hill was visiting a family friend the night of the incident, and as he exited the garage he was approached by Coy, who was answering a nonemergency call at the time.

Music will return to Delfino Winery, beginning Saturday. The Homemade Jam Duo, a husband and wife duo that put a contemporary spin on folk and bluegrass, will perform from 1-4 p.m. Entrance is $10 and includes music, door prizes and a souvenir wine glass. Reservations are required and parties are limited to six or fewer people. Contact 541-673-7575 or terri@delfinovineyards.com with your full name, number in your party and phone number to make your reservation.

May 30—Jeff Minske said he's watched customers walk across the North Broadway Avenue construction zone with minnow buckets in hand. "Right now, no one can get here from the north unless they circle around," said the owner of Minske Bait, Tackle, and Custom Rods at 1117 N. Broadway Ave. With...