Conservative Party excuses for not investigating Islamophobia allegations against Zac Goldsmith are 'disingenuous,' says lawyer who filed a police complaint against him 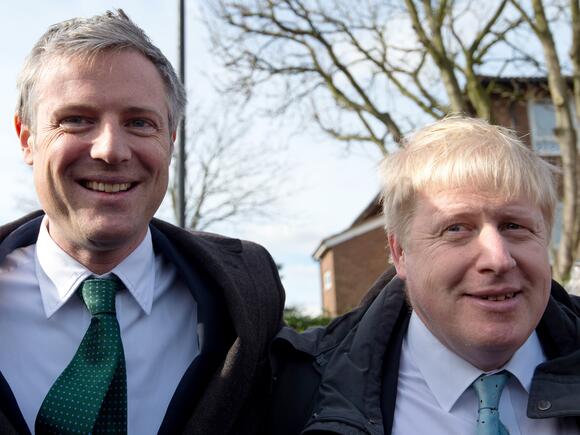 A lawyer who filed a police report against the Conservative Party's controversial campaign for Zac Goldsmith to succeed Boris Johnson as Mayor of London in 2016, has hit out at the party for failing to investigate allegations of Islamophobia leveled against it.

A report, commissioned by the party and published on Tuesday, found that the campaign had been perceived by many people as attempting to play on anti-Muslim sentiment in the capital.

It also found that Islamophobia "remains a problem" in the party and contained an apology from Johnson for "for any offence taken" by his own previous comments about Islam.

However, while examining why no action was taken at the time, the report found that the Conservatives had received just one official complaint against Goldsmith's campaign, some four years after it had finished.

This is despite the fact that Goldsmith's campaign was widely-criticised by both opponents and members of his own party at the time.

Anita Vasisht, whose own complaint against Goldsmith's campaign was not pursued by the Metropolitan Police, told Insider she felt at the time that a report through the Conservatives' complaints procedure would not be treated "in a serious way".

Speaking on Tuesday, she told Insider: "When such serious concerns are out there in the public domain it is for the political party to take action. It is disingenuous to sit there twiddling thumbs, waiting for an official complaint to come in. Reports in the news of the outrage were out on a daily basis.

"I did think about putting in a formal complaint. But if they weren't going to self-report based on the serious concerns, then what could an individual putting in a complaint achieve?

"I couldn't imagine putting in an individual complaint would be treated in a serious way."

She believes the Conservative party ought to have initiated an investigation in response to the extensive press coverage of the outrage into Goldsmith's campaign.

The Singh Investigation into alleged discrimination within the Conservative Party, published on Tuesday, included as a case study Goldsmith's campaign, which it says was "widely reported as 'racist' and 'Islamophobic'". It revealed it had determined the Conservative Party had received one official complaint against Lord Goldsmith, submitted four years after the campaign, in which he lost against Sadiq Khan, the present Mayor of London, a British Muslim of Pakistani origin.

Lord Goldsmith, who was made a member of the House of Lords in 2020, is presently a minister in the Department for Environment, Food and Rural Affairs as well as the Foreign Office.

In 2016, Anita Vasisht, a solicitor, filed a report with the police on Goldsmith's campaign, after receiving a letter from David Cameron, then the prime minister, urging her to vote for Goldsmith. Cameron wrote to Vasisht about how "The British Indian Community Makes London Great", and that "your community has a key role to play" in strengthening the relationship between the UK and India.

Others received letters warning that Khan would "experiment with … radical policies" on taxation targeting their "family's heirlooms and belongings."

Vasisht decided to report the campaign to the police. She wrote: "There is... a real concern that, in targeting apparently those voters identified as 'British Indians'... the intention of Zac Goldsmith and others including the prime minister would appear to be to deliberately incite feelings of hatred for Sadiq Khan in those believed to be of Indian (presumably Hindu) ethnicity - and this, in order to win their votes," the Guardian reported in 2016.

The most significant case study in the report regards comments made by Boris Johnson, the prime minister.

In 2018, Johnson wrote in the Telegraph that women in burqas "go around looking like letterboxes". Johnson told the investigation his writings were often "parodic, satirical", and that his article was "an honest defence for a woman's right to wear what she chooses".

The report also cited remarks made by Johnson including an article where he said that "to any non-Muslim reader of the Quran, Islamophobia - fear of Islam - seems a natural reaction", and another where he wrote of the Congo where "the tribal warriors will all break out in watermelon smiles" upon Tony Blair's arrival.

The investigation offered Johnson the opportunity to apologise for his past remarks. Johnson told the investigation: "I do know that offence has been taken at things I've said, that people expect a person in my position to get things right, but in journalism you need to use language freely. I am obviously sorry for any offence taken.

"Would I use some of the offending language from my past writings today? Now that I am Prime Minister, I would not."

No further comment has since been issued by Johnson or his spokesman.

The report found two-thirds of all incidents reported on the complaints database related to allegations of anti-Muslim discrimination.

It called for an overhaul of the Conservative Party's complaints system, saying there was "an under-resourced and inadequately trained Complaints Team and a weak data collection system", and that it "falls short" of best practice as recommended by the Equality and Human Rights Commission.

The report also concluded that allegations made by Baroness Warsi that the party was institutionally racist and Islamophobic were "not borne out by the evidence", saying "no evidence was found to support the suggestion that the Party had collectively or systematically failed any particular community or group in its processes for dealing with complaints relating to Protected Characteristics, including race, religion or belief, or specifically Islam."

Amanda Milling MP, the co-chair of the Conservative Party, said today that the party has accepted all the recommendations made in the report.

She said: "It is clear that there have been failings in our complaints process and we will begin work on implementing the recommendations set out by the investigation. We will be publishing our plan to implement these recommendations in six weeks' time."

Iranian schoolgirls are removing their hijabs, shouting 'death to the dictator' and raising their middle fingers at the country's leaders

The Norway-based Iran Human Rights group said at least 154 people — including children — have been killed in this latest wave of protests.
PROTESTS・1 DAY AGO
Business Insider

Iranian protester Nika Shakarami was missing for 10 days before she was found in a morgue. She was buried before her family could bury her themselves.
PUBLIC SAFETY・1 DAY AGO
Business Insider

The Russian journalist who protested on live TV is on Russia's wanted list after she escaped house arrest and fled, authorities say

Marina Ovsyannikova protested the invasion live on TV in March, and later shared criticisms on social media and held up a sign opposite the Kremlin.
PROTESTS・2 DAYS AGO