Rob Lowe says Meghan Markle and Prince Harry's move to Montecito, California, means 'the neighborhood is never going to be the same' 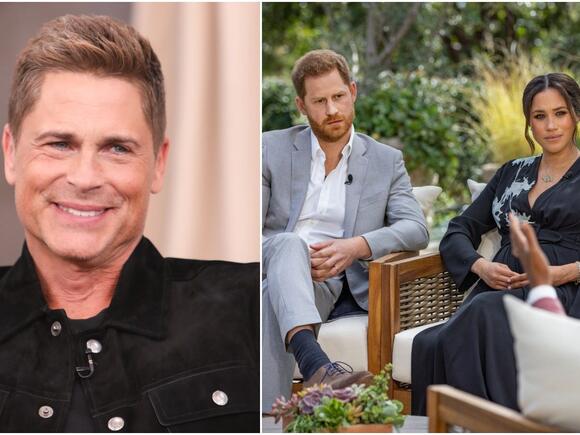 Rob Lowe said Meghan Markle and Prince Harry had brought a lot of attention to his neighborhood in Montecito, California.

The 57-year-old actor told the hosts of E! News' talk show "Daily Pop" last week that while Markle and Harry "keep a low profile," they had heightened the level of interest in the area.

"They definitely have brought a lot of attention to my sleepy little town," Lowe said, adding that he had lived in Montecito for 26 years.

"Let me tell you something: Once the royals move into your neighborhood, the neighborhood is never going to be the same," he said, adding that the couple lived "over the fence" from his first home in the area.

When the hosts Kym Whitley and Justin Sylvester asked whether Lowe was mad about the changes that high-profile residents had brought, Lowe said: "When Oprah moved in, that began the sort of resurgence of Montecito. And now that the royals are there [...] the good news is property values go up, the bad news is the lines are longer at Starbucks."

During their sit-down interview with Oprah Winfrey in March, Markle and Harry said they had stayed at Tyler Perry's mansion in Beverly Hills before purchasing their home in August and settling in Montecito.

The Guardian reported in early April that the police in Santa Barbara County had been called to the couple's property nine times in nine months because of reports of trespassing, alarm activations, and phone requests.

In her interview with Markle and Harry, Oprah said that they were not filming at the duke and duchess' home but at "a friend's house." In the "Daily Pop" interview, Lowe dispelled rumors that it was his house.

"It's so funny, everybody thinks the interview was shot at my house, and then my friend Ted Sarandos, who runs Netflix, everybody thought they shot it at his house," Lowe said.

Celebrity moms from Blake Lively to Gigi Hadid are begging paparazzi to leave their kids alone. The photographers don't legally have to listen - but they should.

Blake Lively detailed a "frightening" paparazzi experience she and her kids had. She's far from the only celeb mom to push back on tabloid culture.

The "Basic Instinct" star said her "hair is standing on end" because there's no guarantee the cast and crew on an upcoming project will be vaccinated.

Netflix shared its first look at Imelda Staunton's portrayal of Queen Elizabeth in seasons five and six of "The Crown."

"The Prince" on HBO Max follows the lives of the British royal family, told from the perspective of 8-year-old Prince George.

In an interview with The Guardian, Billie Eilish spoke about dealing with criticism of her body, a theme present in her new album "Happier Than Ever."

6 royals who kept their identity secret while working regular jobs

British royal Sophie Winkleman says nobody knew who she was while working with Ashton Kutcher on "Two and a Half Men."

Netflix's "Outer Banks" may focus on teenagers, but it only has one actual teen actor in its cast. Season two dropped on July 30.

Jessica Alba and Cash Warren have been married since 2008. On Instagram, Alba said it was hard to keep the spark alive after having kids.

The 40-year-old slice of cake from Princess Diana and Prince Charles' wedding has a red, blue, and silver sugared design of the royal coat of arms.

Here are six celebrity couples - or rumored couples - who played parents and children in your favorite movies and TV shows.

"House of Gucci" follows the assassination of Maurizio Gucci (played by Adam Driver). Lady Gaga shines in the trailer as Gucci's wife, and Jared Leto is unrecognizable as Gucci's cousin. The movie opens on November 24. Visit Insider's homepage for more stories. The long-awaited first trailer for "House of Gucci"...