'Dr. Doom' economist Nouriel Roubini breaks down why bitcoin is neither a currency nor an asset - and is instead a giant bubble 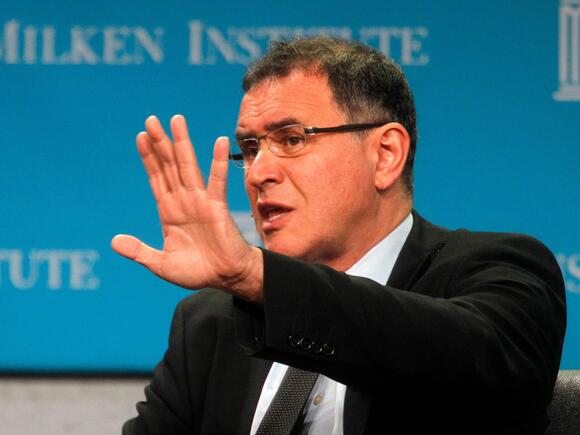 Economist Nouriel Roubini said bitcoin is neither a currency nor an asset and reiterated his view that cryptocurrencies are in a bubble, according to a Friday interview with Goldman Sachs.

Roubini explained that a currency must have four qualities, including: a unit of account, a means of payment, a stable store of value, and act as a single numeraire.

"Bitcoin and most other cryptocurrencies have none of these features," Roubini said. Nothing is priced in bitcoin, it's not a scalable means of payment, it's not a stable store of value given its high volatility, and the prices of different items are not denominated in cryptocurrencies "because there are thousands of tokens and thus limited price transparency," Roubini said.

"Even the Flinstones had a more sophisticated system by using shells as a single numeraire to compare the price of different goods," Roubini said.

While cryptocurrencies are not currencies, according to Roubini, they are also not assets.

"Assets have some cash flow or utility than can be used to determine their fundamental value," Roubini said, noting that bitcoin and other cryptocurrencies don't have cashflow or utility.

Because of that, cryptocurrencies are in a bubble, according to Roubini.

"A bubble occurs when the price of something is way above its fundamental value. But we can't even determine the fundamental value of these cryptocurrencies, and yet their prices have run up dramatically," Roubini explained.

Roubini remains doubtful that institutions will adopt cryptocurrencies en masse in their asset allocation models, given that the asset can drop by 15% overnight, according to the interview. And corporations adding bitcoin to their balance sheet seems far fetched due to that high volatility. Bitcoin has fallen 50% over the past two weeks alone.

"Any treasurer who invests in something that falls 15% in value overnight will be fired. Sure, Elon Musk can do it because he's the boss, although he's since backtracked somewhat on bitcoin due to environmental concerns. But few other people are in that position," Roubini said.

MicroStrategy CEO Michael Saylor disagrees, as he continues to add bitcoin to the company's balance sheet and has even taken on debt to do so.

And as for bitcoin serving as an inflation hedge, Roubini remains skeptical, saying that just because something is scarce doesn't mean it has a fundamental value.

"It's not difficult to create something with limited supply, and there's no reason artificial scarcity is valuable in and of itself," Roubini said.

"When you look at FTX US, there's an enormous amount of potential growth," Bankman-Fried told CoinDesk TV.

Billionaire Thomas Peterffy Invests in Crypto, Says There's a Chance It Could Be 'a Dominant Currency'

JPMorgan just became the first U.S. big bank to give retail clients access to Bitcoin exposure, effective July 19, reported Business Insider. Contrary to other prominent banks, JPMorgan will reportedly not limit access to only ultrawealthy clients. A person familiar with the move told Business Insider that "it applies to...

Ultra-Wealthy Warm Up To Bitcoin, 50% Want Exposure According To Goldman Sachs Survey

Per a Bloomberg report, around half of the family offices in business with Goldman Sachs want to invest in Bitcoin and cryptocurrencies. The banking giant conducted a survey with participation from around 150 family offices with a global presence. Data provided by Goldman Sachs revealed that 15% of the participants...

JP Morgan Chase, America's largest bank, is now offering crypto products to its wealthy clients. In an internal memo accessed by Business Insider, the bank communicated with its wealth advisors that they could take buy and sell orders for five cryptocurrency products starting July 19, 2021. This is a major...

The hedge fund manager told CNBC that trillions in stimulus, an increase in wages, and the rise in vaccinations will lead to a boom.

The central bank doesn't want crypto ETFs on the country's capital markets. According to a notice and explanatory letter published by the Bank of Russia, stock exchange operators should avoid listing any securities, such as exchange-traded funds, that provide payments based on the prices of cryptocurrencies, digital assets issued abroad, cryptocurrency price indexes, crypto derivatives and securities issued by cryptocurrency-related funds.

60% of uber-rich family offices considering crypto or own it: Goldman Sachs

A survey conducted by major investment bank Goldman Sachs has found that close to half of its family office clients want to add cryptocurrency to their portfolios, signaling the ultra-wealthy are becoming increasingly bullish on digital assets. The survey, reported by Bloomberg, queried more than 150 family offices worldwide and...

When Elon Musk tweets, the crypto world listens. CNN's Jon Sarlin explores the contradictions of crypto's decentralized networks alongside the very central influence of one man.

Cryptocurrencies have been experiencing a lot of volatility, and while there are surely numerous factors behind this — China doubling down on its crackdown of cryptocurrency, for example — the most visible and widely discussed factor just might be Elon Musk, whose tweets almost single-handedly seem to move the crypto market.

Jack Dorsey Tells Elon Musk: Bitcoin Has 'Irreverence' Factor Going For It Just As Much As Dogecoin

In an ironic twist given CEO Jamie Dimon’s well-established distrust of the industry, JPM. organ has reportedly become the first major US bank to provide all wealth-management clients with access to bitcoin and other cryptocurrency funds. Advisors in JPMorgan’s $630 billion wealth management division can now accept orders to buy...

Here is what it'll take to pull bitcoin out of its bear market, according to JPMorgan

The bear market in bitcoin is ongoing as momentum traders unwind their positions, JPMorgan said in a note on Wednesday. The bank is looking for signs of new institutional adoption to help lift bitcoin from its rut. "We believe that the share of bitcoin in the total crypto market would...

Bitcoin and cryptocurrency investors were yesterday glued to one of the most hotly-anticipated events in the crypto calendar so far this year—a live discussion between Tesla and SpaceX billionaire Elon Musk, Twitter's Jack Dorsey, and major Tesla and bitcoin investor Cathie Wood. The bitcoin price jumped in anticipation of the...

Goldman Sachs: 45% of the richest people are interested in crypto

Bitcoin and cryptocurrency prices have swung wildly over the last couple of days, with bitcoin dipping under $30,000 before bouncing back. Extreme bitcoin price swings have been outmatched by the meme-based dogecoin, Elon Musk's pet project that's rocketed into the cryptocurrency top ten by value this year (subscribe now to Forbes' CryptoAsset & Blockchain Advisor and discover crypto blockbusters poised for 1,000% gains).

‘Fundamentally, Bitcoin Should Go Much Lower’, Nouriel Roubini Screams After BTC’s Fall Under $30,000

It has been a rough 24 hours for bitcoin investors. After trading sideways for a couple of weeks, bitcoin finally broke below the $30,000 support region for the first time in a month on Tuesday. The downward move has inadvertently cost the flagship cryptocurrency majority of the gains it had accumulated during the 2021 bull rally.