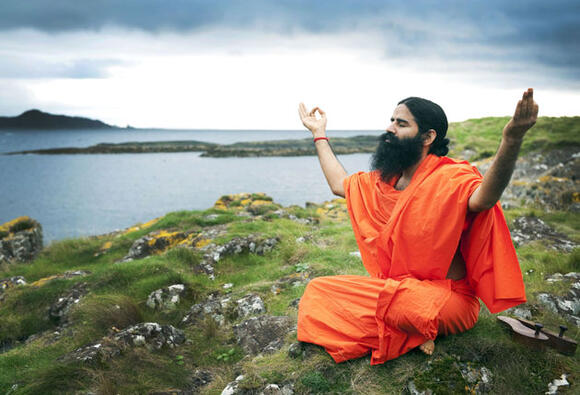 India ’s health minister has condemned the country’s most famous yoga guru Ram Kisan Yadav – better known as Ramdev – after he derided medical practitioners and their role in the pandemic .

Ramdev, who rose to fame teaching yoga on TV before launching an alternative medicine empire under the brand Patanjali, has angered doctors by claiming that during the Covid crisis “hundreds of thousands of people died after taking allopathic medicines”, calling modern medicine “stupid” and based on “bankrupt science”.

The Indian Medical Association, which represents 300,000 doctors, called for the yoga guru to be prosecuted under pandemic emergency laws as a threat to public health, and health minister Harsh Vardhan said Ramdev’s comments had “insulted” those fighting Covid on the front lines.

The latter represents a particularly significant intervention, as Mr Vardhan has himself attended the launch of Patanjali products including “Coronil”, which was originally marketed last year as the world’s “first evidence-based medicine” against Covid-19.

The manufacturer was later forced to change its marketing after its claims were disproved. The company continues to promote the product, a tablet containing trace amounts of a blend of roots and herbs, as an “immunity booster”.

The IMA had written in its letter that Ramdev’s “untutored” statements were “a threat to the literate society of the country as well as to the poor people falling prey to him”.

“Ramdev deserves to be prosecuted for causing danger to the lives of many by making them believe not to take the advice of allopathy doctors,” it said.

The Federation of All India Medical Associations (FAIMA) also said it had served a legal notice to Ramdev, condemning the “baseless and unscrupulous claims made for cheap publicity”.

The Patanjali Trust in a statement on Saturday denied the allegations and said Ramdev was merely “reading out” a WhatsApp forward when he made the comments, and that the guru had “utmost regards” for doctors.

Several doctors also took to Twitter to demand strict action against Ramdev, and on Monday night an exchange on a live TV panel went viral after IMA member Dr Jayesh M Lele lambasted the guru for using the controversy to promote his so-called “Covid care kit”. Ramdev appeared on Aaj Tak, a leading Hindi news channel, surrounded by packets of his company’s products.

After the outrage, Mr Vardhan, wrote in a letter in Hindi and issued via the health ministry that he condemned Ramdev’s comments and “hoped” he would withdraw them.

“The people of the country are very hurt with your remark on allopathic medicines. I have already told you about this feeling over the phone. Doctors and health workers are like gods for the people of this country, for whom they are fighting against the coronavirus and risking their lives,” the two-page letter said.

“You have not only insulted Corona warriors, but have hurt the feelings of the people of the country. Your clarification yesterday is not enough to make up for it... I hope you will think hard on it and withdraw your statements completely,” he added.

After the letter from the health minister, Ramdev tweeted: “Received your letter Dr Harsh Vardhan. In that context and to end the whole controversy over the conflict of different treatments, with regrets, I am withdrawing my statement.”

However just hours later he tweeted another letter, posing questions to various medical associations over the effectiveness of modern treatments for ailments like diabetes and hypertension. At the same time he continued retweeting attacks against the IMA’s public statements against him.

NEW DELHI — India’s actual death toll from COVID-19 could range between 1.3 million to a staggering 5 million, with even the most conservative estimate putting its tally at more than double the U.S., the highest recorded in the world so far. The numbers, derived from research models and local...

Indians have expressed shock and anger after a junior health minister told parliament that no Covid deaths had been reported due to oxygen shortages. Hospitals across the country ran out of oxygen in April and May during a deadly second wave - there were daily reports of people dying from a lack of oxygen.

'Quite scary': UK's top medic in warning over COVID outlook

The British government's top medical adviser has warned that the number of people hospitalized with the coronavirus could reach "quite scary" levels within weeks as cases soar as a result of the more contagious delta variant and the lifting of lockdown restrictions. Chief Medical Officer Chris Whitty told a webinar...

MUMBAI, July 28 (Reuters) - India on Wednesday contested Cambodia's claims that Indian buffalo meat was infected with COVID-19, saying it exports the meat only after getting COVID-free certification. Cambodia earlier this week said three out of five containers of frozen buffalo meat imported from India tested positive for coronavirus.

Tokyo’s Olympic Village: The most COVID tested community in the world

TOKYO (KSEE) — The 2020 Summer Olympic Games are taking place in 2021 due to the COVID-19 pandemic, and while a record number of positive cases have been diagnosed in the city of Tokyo, officials aren’t worried. “We are all, as you know, living in very, very difficult times,” says...

The number of empty shops in high streets, retail parks and shopping centres has increased in the past three months, according to new data. The British Retail Consortium (BRC) and Local Data Company (LDC) found that fashion retailers had been hardest hit with the continued surge in online business in the sector and the closure of high street institutions including Debenhams and Topshop.

An expert panel in India has recommended the government begin trials into the mixing and matching of different vaccine types in the country. Meanwhile amid a spike in cases in the southern state of Kerala, the government has announced the imposition of a weekend lockdown — for 31 July and 1 August. Only about 44 per cent of the population of the southern state was found to have Covid-19 antibodies, the latest country-wide survey has revealed.

Before he died, a doctor caring for a Covid patient received horrifying responses.

Ex-Nurse Who Calls COVID-19 Doctors “Nazis” Believes the Devil is Orchestrating Pandemic; Son Says She is “Beyond Help”

Former nurse Kate Shemirani is in hot water after giving a highly controversial speech at a recent anti-lockdown rally in the United Kingdom, during which she compared doctors giving out the COVID-19 vaccine to Nazi doctors that were later hanged for their crimes. Her critics say the speech was a...

COVID has started to show signs it's turning into a milder illness for people who have been infected before, a study found. Those who had previously battled the killer bug suffered far less a second time around, with lower viral loads. It also meant they were less likely to spread...

India's Gem Palace of Jaipur is a world-renowned jeweler celebrated for its extravagant gems and elaborate, Indian-inspired designs. The brand was established by the Kasliwal family in 1852 when they were appointed the official jewelers for India's royals in Rajasthan, a northern Indian region dubbed the Land of Kings. The...

The IOC’s medical director says COVID-19 cases at the Tokyo Games are not burdening the city’s medical system. Officials say that from July 1 through Wednesday, 198 people accredited for the Tokyo Games have tested positive for COVID-19, including 23 athletes. Three of the new cases from Wednesday were athletes staying in the Olympic Village.

With coronavirus deaths rising in Myanmar allegations are growing from residents and human rights activists that the military government, which seized control in February, is using the pandemic to consolidate power and crush opposition. In the last week, the per capita death rate in Myanmar surpassed those of Indonesia and...

Japan to widen virus emergency after record spike amid Games

Japan is set to expand the coronavirus state of emergency in Tokyo to neighboring areas and the western city of Osaka on Friday in the wake of record-breaking surge in infections while the capital hosts the Olympics. A government panel approved the plan putting Saitama, Kanagawa and Chiba as well...

Sure Signs You Have the New COVID Variant

With a new COVID-19 variant proving "more transmissible"—and breakthrough cases possible, though apparently unlikely, even after vaccination—it's important to stay on top of any new symptoms you may be experiencing, since they could be coronavirus. By now, you may know the core symptoms of the traditional virus, but experts in the UK are saying that the new variant may have some additional hallmarks that are different. Read on so you can spot all the symptoms—and to ensure your health and the health of others, don't miss these Sure Signs You Have "Long" COVID and May Not Even Know It.

An expectant mum whose bump was so big it was thought she was having twins has given birth to one of the UK's biggest babies. Ronny-Jay Fewtrell shocked midwives when he was put on the scales after birth and weighed an incredible 11lbs 5.5oz - meaning he was effectively bigger than a four-month-old baby.

Elon Musk warns the US Military: China will overtake the US. “The US will be militarily second to China” without radical innovation, Musk says

Early this year, Elon Musk’s friend and co-founder of PayPal Peter Thiel, warned that big tech companies are too cozy with China. Calling Google a ‘treasonous’ company,” Thiel said the tech giant is working with the Chinese military through its artificial intelligence work with Chinese universities, a charge that Google later denied as “baseless.”