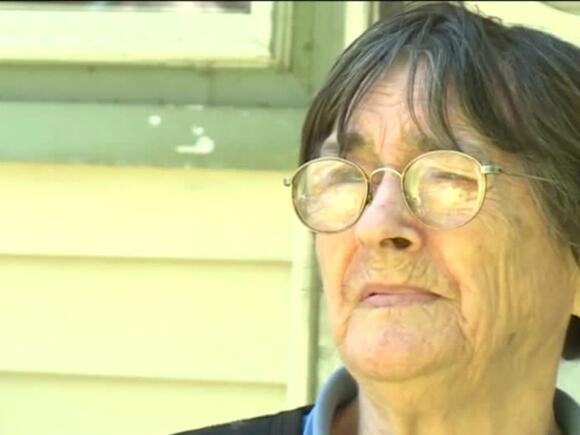 RICHMOND, Va. -- Some neighbors who live along and near Powell Road in South Richmond said they fear for their lives and worry they will get shot by a stray bullet.

“You don't even want to be in front of the window. You don't even play your television too loud. You go to bed and cover your head," said Alice Tripp, who has lived near Powell Road for five decades.

The 84-year-old widow said does not want to move because this is the home she shared with her husband and she also wants to live the rest of her life there.

"I heard a lot of gunshots, but that's nothing new because we hear them quite often," Tripp said about Thursday night. “It seems to be part of life now.”

Police said a man showed up to Chippenham Hospital Thursday night with gunshot wounds and investigators determined the scene was in the 2000 block of Powell. At last check Friday, the victim remained in critical condition.

Eddie Archer, who does not know the victim, said things have gotten worse.

"It's been a quiet neighborhood, but just for some reason something has just gone haywire," Archer said.

His SUV took on collateral damage with the hood dented and singed by a slug from Thursday's violence, which was eerily similar to what happened right next door five weeks ago.

That is when a 17-year-old girl watching TV was wounded when a bullet came through the wall.

Archer said the girl has not yet returned home and that that sends a strong message.

"When it turns dark, we've got to be more protective," Archer said. "We've got to bring them in the house.

Archer hopes police make a break in the case and said he planned to call Councilman Mike Jones (9th District) "to see if we can get more surveillance" in the area.

Jones called the number of shootings "ridiculous" and urged those responsible to "find a different way to get our hustle on, so everyone can enjoy life."

"I think we are beyond the statement of put your guns down,” Jone said. “The reality is this: for folks that are in the game, ya'll need to be conscious of the fact that we are really impacting. You may have beef with someone or someone got at you but c'mon this is not the way to come about it."

Jones, who used to live just a few blocks from Powell, said "help is on the way" for those who live on Powell and surrounding streets.

"I'm going to hold the mayor's feet and city council's feet to the fire," Jones said. "I’m so far past statements, salutations, political posturing. You know decrees that gun violence is a health crisis, I get that, [but] we need resources flowing into the community."

If you have information that could help detectives, call Crime Stoppers at 804-780-1000 or submit a tip online at www.7801000.com. The P3 Tips Crime Stoppers app for smartphones may also be used. All three Crime Stoppers methods of contact are anonymous.

This is a developing story, so anyone with more information can email newstips@wtvr.com to send a tip .

Detectives are still investigating this homicide and ask anyone with information to call Major Crimes Detective G. Russell at (804) 646-7715 or Crime Stoppers at (804) 780-1000. The P3 Tips Crime Stoppers app for smartphones also may be used. All Crime Stoppers reporting methods are anonymous.

Richmond officer recovering after being attacked on a call

Crime Insider sources confirm that the U.S. Marshal Fugitive Task Force is part of an active manhunt for the man that badly beat the female officer on Monday night.

Geoffrey Sills, 30, is charged with a number of federal offenses including assaulting, resisting or impeding officers using a dangerous weapon, obstruction of an official proceeding and civil disorder, among other charges.

Petersburg Police are asking anyone with information about the robbery to call Crime Solvers at (804) 861-1212.

One adult male victim has been transported to the hospital to be treated for non-life-threatening injuries sustained from the incident. The Officer-Involved Investigations Team is now at the scene and is assisting in the investigation.

Jesus Turner faced one count of first-degree murder, two counts of malicious wounding, and three counts of use of a firearm in the commission of a felony.

Charges are pending the outcome of the police investigation.

Three people have been indicted by a special Virginia grand jury on first-degree murder and more than 80 other charges in connection with the February slaying and dismemberment of a 20-year-old man.

Man on trial for murdering child in Richmond park

The trial began Tuesday for Jesus Turner, the third and final suspect in the 2019 Memorial Day fatal shooting of nine-year-old Markiya Dickson.

Family heartbroken after father of 3 dies in shooting

Devontae McLaurin, a 24-year-old father of three, was shot in the back of his head. At the time of the shooting, he was beside his father who was shot in the ribs but survived.

Last week, Michael Pollock, 66, of North Chesterfield was taken into custody and charged with three counts of aggravated sexual battery and object sexual penetration from an incident that happened at a workplace in Richmond on May 17.

This request will now be sent to the transportation board for final approval.

A nearly 200-year-old piece of Chesterfield history avoids a date with the wrecking ball thanks to a group of dedicated preservationists.

More than 4.94 million passengers have hopped on a Pulse bus since the system went online on June 24, 2018, according to GRTC Director of Communications Carrie Rose Pace.

The shootings were reported in the area of East Broad Street and N. 17th Street in the Shockoe Bottom neighborhood.

When the Facebook page Love What Matters recently re-shared the story of Jason with On Time Towing, it touched tens of thousands of people. Jason, the post read, stopped to help a quadriplegic man whose front tire fell off his modified van.

As with many hobbies, the time spent alongside the tracks just isn't about trains. It's often about taking the time to sit down and talk to one another.