Nevada Current is a nonprofit online source of political and policy news and commentary. We seek to demonstrate how policies, institutions and systems make life harder for Nevadans than it needs to be; document how things got that way, and; explore what it might take to fix them. The Current is part of States Newsroom, a national 501(c)(3) nonprofit supported by grants and a coalition of donors and readers. The Current retains editorial independence.

By Michael Lyle
Posted by
Nevada Current
24 days ago 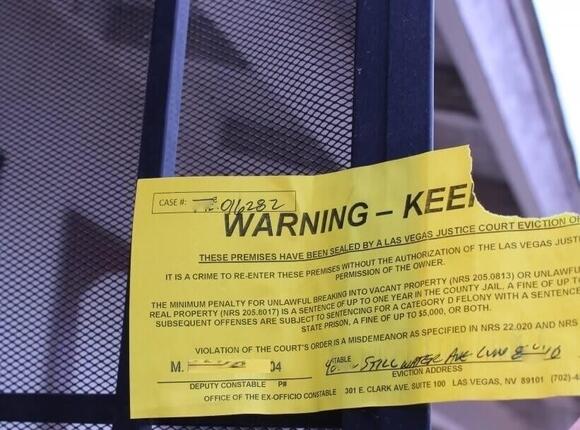 With Nevada’s eviction moratorium set to expire at the end of month, which housing justice advocates and legal groups say could overwhelm the court with cases and lead to thousands of lockouts, the Assembly introduced legislation that could slow the impact.

Assembly Bill 486 would stay an eviction proceeding if a tenant has an application for rental assistance pending. The legislation was introduced Thursday on the Assembly floor.

Bailey Bortolin, the statewide advocacy, outreach and policy director for the Nevada Coalition of Legal Service Providers, said the bill makes it so the state can “lift the moratorium in a safe and clear way.”

She added that tying the eviction process directly to the rental assistance programs is “the light at the end of the tunnel” legal groups were looking for.

“The burden is still very much on renters to take action if they get a notice, but they will have a new defense available to them to say, ‘I have a pending rental assistance application’ or ‘I have a granted rental assistance application and my landlords are refusing to accept it,’ Bortolin said. “We are putting that conversation in front of a judge and getting it sorted out because it’s not fair to evict people when there is available money and a remedy sitting right there that we can connect with the system.”

Quentin Savwoir, the deputy director of Make it Work Nevada and a member of the Nevada Housing Justice Alliance, said the legislation “represents the type of tenant protections that Nevadans have been longing for, even before the pandemic.”

Nevada Housing Justice Alliance has been critical of lawmakers for watering-down and killing tenant protections and eviction-related legislation.

“This measure will ensure that our families can stay in their homes. They won’t be forced to sleep in their cars or take up temporary residence in weekly motels,” Savwoir said. “It would be fantastic if these provisions and protections … were made permanent, but you can rest assured that we will continue to build power as part of the Nevada Housing Justice Alliance to maintain these protections.”

Gov. Steve Sisolak’s moratorium extension in March, which was set to expire May 31, wasn’t automatic and required tenants to submit a declaration to their landlords.

After the state’s moratorium expired, eviction case filings would have been able to proceed in the courts but tenants wouldn’t be evicted until July 1 after the Centers for Disease Control and Prevention’s order expires.

“I think our biggest fear has been, without the moratorium, how do we utilize the rental assistance money in a way that prevents it from being reverted back to the federal government,” Bortolin said.

Nevada’s unique and quick eviction process means people waiting for rental assistance could still be locked out even as they wait for their applications to be approved.

“I think this will ensure Nevada is successful in utilizing federal dollars that would otherwise be reverted back to the federal government and makes sure people get the help they actually need,” Bortolin said.

In a statement Thursday, Sisolak said AB 486 will “help ensure federal rental assistance makes its way to the tenants and landlords who need it and will also provide an opportunity for eligible small landlords to apply for and access rental assistance directly.”

If a landlord wishes to apply for rental assistance on behalf of their tenant, the legislation allows them to complete a form through Home Means Nevada, a nonprofit established by the Nevada Division of Business and Industry.

Landlords are eligible if they own a single family home, are a Nevada resident, or employ a property manager in Nevada and receive an annual gross revenue from rent of less than $4 million.

After a landlord is deemed eligible, the information would be sent to social services agencies that would then contact the tenant.

There are “pieces in the bill for landlords,” Bortolin said. “There is money for small landlord business owners. There is a way to marry the judicial system to rental assistance so we’re not missing each other in the night.”

In addition to imposing civil penalties on landlords who wrongfully evict tenants, the legislation also notes that proceedings will be dismissed if tenants prove a landlord refused to accept rental assistance.

If a landlord received rental assistance after a tenant defaulted on rent and still tries to evict, the legislation says, “the tenant or governmental entity administering the program for the rental assistance may file a claim of fraudulent eviction against the landlord.”

Sisolak’s moratorium extension required landlords to provide rental assistance information along with eviction notices, which is now being codified into AB 486.

Throughout the eviction moratorium, legal groups have warned of landlords using loophole s to oust renters who were unable to pay rent through other means such as lease violations. Bortolin said the bill would address some of those loopholes.

“It’s sending all cases, with very small exceptions, to mediation to use the problem-solving route to try to connect people with rental assistance and make sure we can resolve cases prior to an eviction,” Bortolin said.

Similar to the alternative dispute resolution program authorized in the special legislative session in summer 2020, the bill also directs eviction cases to court meditation with the exception of nuance cases, such as property destruction, and/or instances where the property is being sold.

With the end of the Legislature approaching fast, the bill hasn’t been scheduled for a hearing yet.

The legislation, if passed, would go into effect July 1, which is when the CDC’s order is set to end.

Bortolin was optimistic there was still time to pass the bill and put it in place.

“I think leadership has made it very clear that they understand this crisis and at the end of the session we have an eviction crisis,” she said. “I think coming into the legislative session, everyone understands this is something we need to do. The bill that came out is very logical, and a clear measured approach to what comes next.”

Tenants would have to file a response to an eviction notice, but once they do it will trigger a review by Clark County and connect tenants to case workers or guide them through the rental assistance application process.

“This will allow for a connection point between mediators, the CHAP rental assistance program, and Clark County in conjunction with the courts in terms of notifications and prioritization,” Schiller said.

Nevada Current is a nonprofit online source of political and policy news and commentary. We seek to demonstrate how policies, institutions and systems make life harder for Nevadans than it needs to be; document how things got that way, and; explore what it might take to fix them. The Current is part of States Newsroom, a national 501(c)(3) nonprofit supported by grants and a coalition of donors and readers. The Current retains editorial independence.

Opposition to lithium mine grows among tribes, conservationists

Dem who masqueraded as Republican seeks to oust Fiore from Council

Voting rights alone will not save us

Policy, politics and progressive commentary Much has been said and written about voting rights this last year and for good reasons. Vote Nevada, a nonprofit founded by Nevadans for Nevadans, will be contributing to this dialogue over the summer with events focused on our full suite of democracy rights, such as the right to fair representation and the right to… Continue Reading Voting rights alone will not save us  The post Voting rights alone will not save us  appeared first on Nevada Current.

What people need to know about critical race theory

Nevada poised to allow college athletes to profit off their name, image and likeness

The bill was never introduced, but Sisolak’s Blockchains concept is still alive

Policy, politics and progressive commentary Nevada lawmakers on the final day of the 81st Legislative Session set in motion a significant shift in tax policy toward an industry that has long been scrutinized for having a unique constitutional carveout protecting it from tax hikes. Assembly Bill 495 was a bipartisan compromise forced by multiple proposed ballot questions aimed at some… Continue Reading New mining tax approved, revenue will fund schools The post New mining tax approved, revenue will fund schools appeared first on Nevada Current.

With eviction cases resuming, tenants urged to respond to all notices, be proactive

Policy, politics and progressive commentary Republicans in Nevada have been having a field day saying “socialists! socialists! socialists!” ever since some Democratic Socialists of America (oh dear!) won state Democratic Party offices. For example, North Las Vegas Mayor John Lee even cited, however insincerely, socialists!!! as the development that drove him to switch parties and become a Republican. (Oh, and… Continue Reading Why? The post Why? appeared first on Nevada Current.